Well Beetlemaniacs, we're now at the end of out look at Blue Beetle's adventures in "Showcase '94" inspired by our friends at the Fire and Water Podcast's coverage of Aquaman and Firestorm back-up stories. (If you missed part 1 click here, and part 2 here) Today we take a look at "Caged City, Chapter Three: Bug War" written by Brian Augustyn, with pencils by Patrick Rolo and inks by Dick Giordano.

Last issue ended with a cliffhanger situation worthy of Mister Miracle or Harry Houdini...Ted, attempting to escape Freemont in a BUG, had a missile hot on his tail. How will he get out of this? Read on... 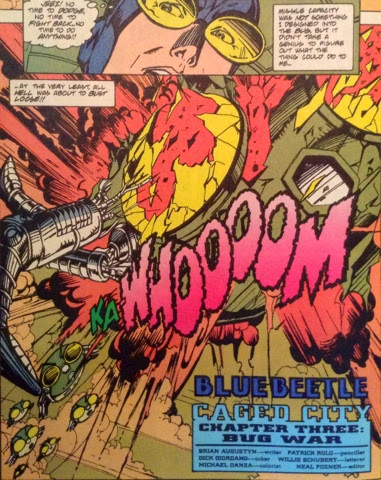 Just like a magician or escape artist, Ted manages to survive. He laments he can neither fly, nor return from the dead...so what's a guy to do? He lands on the roof of one of Kurtz' BUGs and slips in via the escape hatch. Once inside he quickly dispatches the two Kurtz cops piloting the ship and sets out to get revenge! With some spectacular aerial maneuvers he dents, dings, and disables the other BUGs. 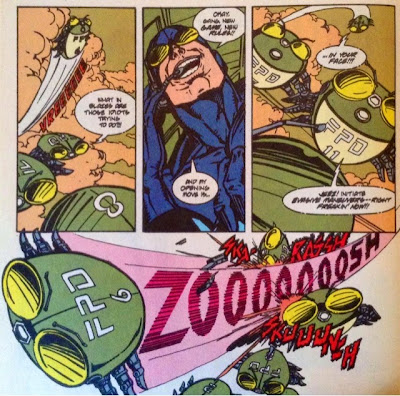 "You all better limp back to base before you kill yourselves!" he says, flying toward Kurtz' tower. But as we've already seen, Kurtz doesn't take losing well, and certainly not losing his entire fleet of BUGs. He orders his right hand man Marcus to seal the entrances, scramble ground troops and fry Ted if he's "stupid enough to return" and, just to be safe, calls for a pursuit ship to blow Blue Beetle out of the sky. The pursuit ship tries taking out Ted with lasers, but some fancy flying lands the attacker in the same tangled heap as the other BUGs. Kurtz is outraged! How can Blue Beetle keep evading him? Why can't he just understand that Kurtz is a "simple public servant, trying to do the job I was elected to do"? Ted is taking this pretty personally. After all this nut is using Kord patents to run his police state, he has to go down! So he does what any revenge seeking hero would do when dealing with a power mad dictator... 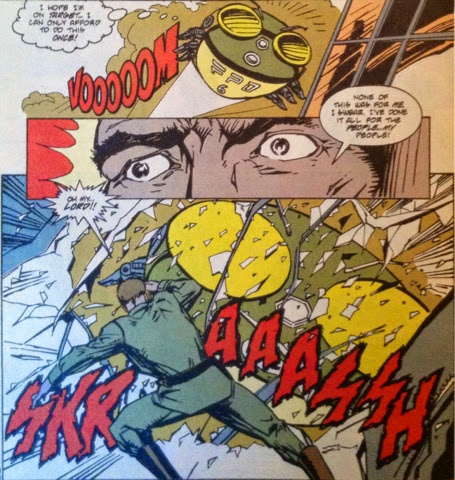 Yup, he crashes the BUG right into Kurtz' office! Then leaping into action he takes down Kurtz with a tackle! Without his thugs to back him up, Kurtz goes down fast! It's over! The only thing left? How did Kurtz get his hand on Kord technology? 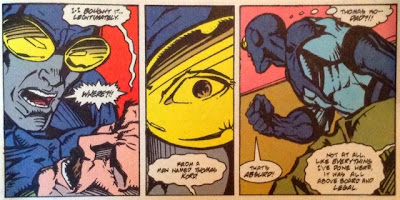 This really was a fun three issue story! In fact, I really wish there were more. Quick pacing, solid action with cliffhanger excitement, and nice art. What's not to love? Did this father/son betrayal really get paid off in "Justice League" as the final caption promises? I honestly don't remember...I'll need to dig those issues out and check...maybe we'll see in a future post?
Posted by Unknown at 3:00 AM