Last issue, the Reach revealed themselves to be master manipulators! They tested Jaime, tried converting an army of human slaves, made peace with the US Government, and then appeared to implant a scarab on Peacemaker John Rogers and Rafael Albuquerque are back, with issue #14 and a story called "Mister Nice Guy". 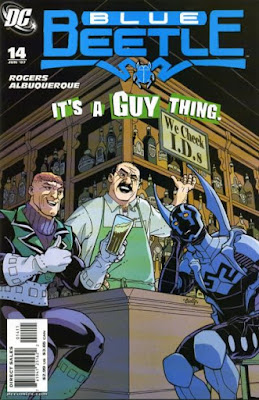 Well Beetlemaniacs, today DC Comics released "DC Universe: Rebirth" #1, and without spoiling too much off the bat...Blue Beetles are back! 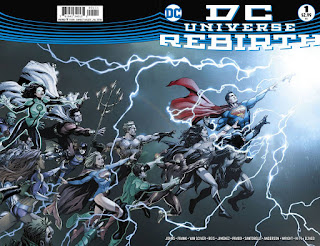 From here on there will be some spoilers...proceed at your own risk!

A Matter of Animus!

Last issue Ted was forced to battle his resurrected former mentor Dan Garrett for the title of the one true Blue Beetle! In the end Dan sacrificed himself, again, to defeat the evil being that controlled Dan's scarab. Needless to say, Ted is not a happy camper! Len Wein, Ross Andru and Danny Bulanadi are here for issue #19, and a story called "A Matter of Animus!" 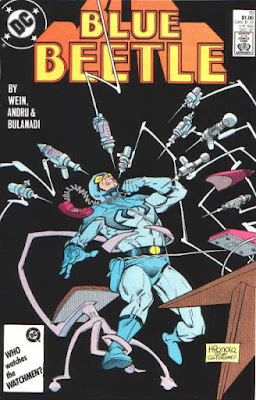 Blue Beetle is ticked! After the events of last issue he wants answers so he storms into S.T.A.R. Labs to meet with Garrison Slate. Why would he visit Slate? We get a quick flashback to the moments immediately following the death of Dan Garrett last issue to find out. When Dan died, killed by the very source of his own power, the boy known as "File 13" approached the fallen hero's body...but before he could say anything, he passed out. The area was then swarmed by a SWAT team and S.T.A.R. Labs personnel. They're there for the boy. Slate says its because the boy escaped from a lab and contact with the outside could kill him. 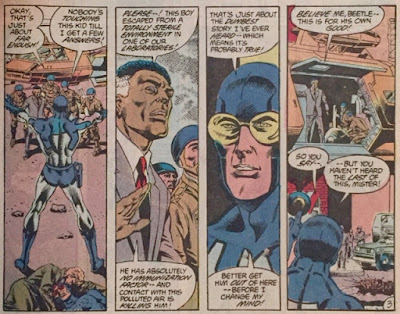 Reluctantly, Blue Beetle allowed them to take the child but now he wants an explanation! What he gets though is an assurance the boy is safe...and then a visit from S.T.A.R Labs security.

In London, Murray Takamoto is meeting his new employers at Statistical Occurrences Limited, a private insurance company specializing in cases involving heroes and villains, Miss Theodora Twidgett and her father Alfy Twidgett of the Boy Commandos. While in France, Dr. Cornelius and Catalyst have been interrogating Jeremiah Duncan. 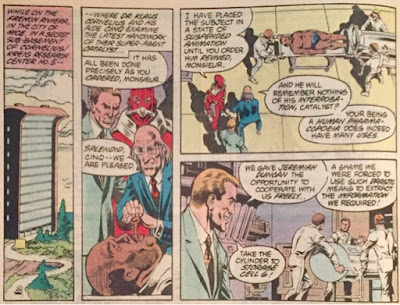 It seems he had stolen compound XD-3 from Cornelius and they're eager to recover it. And at Kord headquarters, Melody decides if Ted's not going to be around to run the company then she'll find someone who will!

Back in Chicago, Ted does a little digging into the mystery of "File 13". Using his old pal Murray's credentials and guessing at the password, he hacks into S.T.A.R. Labs files and Dr. Rose Beryl, a biologist, had spliced her genes with her friend Dan Garrett's to create a child...intended to be the first of a new race of humans. But there was a problem, the boy had no natural immunity and had to be raised in quarantine. 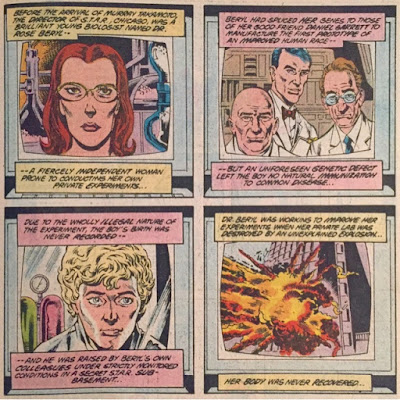 Later, Beryl disappeared in a lab explosion but recently a body was found washed up on a beach with matching DNA leading Ted to determine that the biologist is still alive! He uncovers a few more details that lead him, in the BUG to Bodega Bay, California and a company called Animus Explorations Unlimited. Sneaking into the facility he finds it seemingly abandoned...until he's attacked by the furniture! 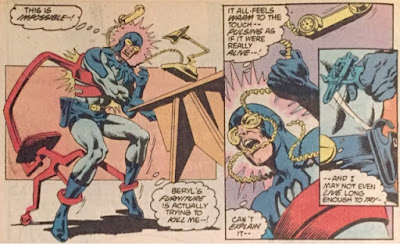 As he battles against chairs, desks and telephones a mysterious female watches from computer monitor before ordering her "children" to bring him to her. A dazed Blue Beetle soon finds himself face to face with Doctor Animus...who is in reality Rose Beryl clad in a strange suit made up electronic circuitry. 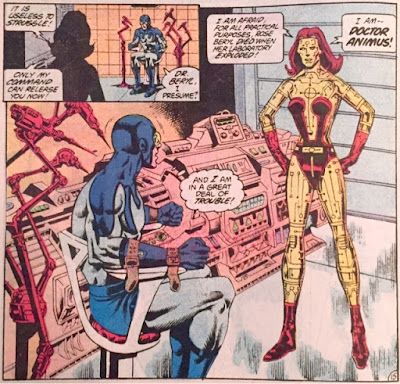 In Paris, at The Dome (headquarters of the Global Guardians), Fleur-de-Lis accepts an assignment from the Director. Shut down Cornelius/Kreig's research center. 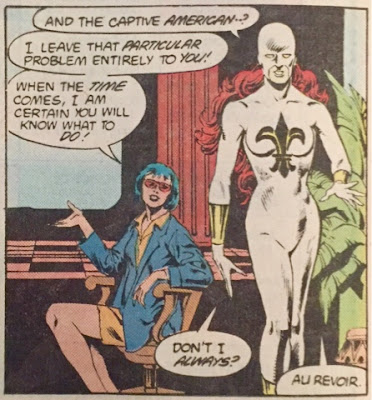 Blue Beetle tries to appeal to the motherly nature of Doctor Animus, explaining that he's there to get her help for her son, File 13. It doesn't work. She sees him as a failed experiment, nothing more. To make her point, she shows Ted pictures of other mutated failures, before showing him her success...a lab full of her creations. They'll soon be fully formed humans, with implanted memories, sent out into the world as part of plot to control the Earth! When she tells Ted he's of no use to her alive...but his cells will harvested for her experiments he decides its time to make his move! He breaks free of the weird chair creature that holds him, but Animus just laughs. He has nowhere to go! So he signals the BUG and blasts the base of of the facility starting a mini earthquake. Animus makes her escape, leaving Blue Beetle to battle more furniture and odd, half formed human parts. 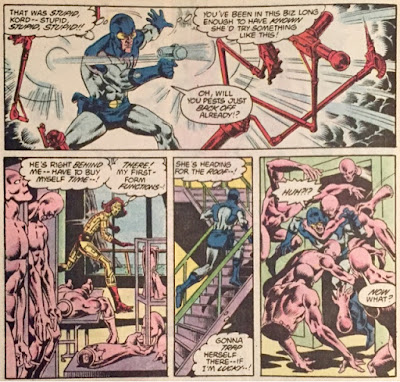 He manages to signal the BUG again to block her escape leading to a brief one-on-one battle that ends when Doctor Animus falls into the sea. 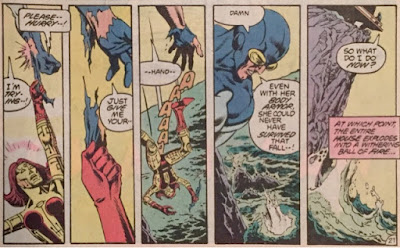 Blue Beetle returns with a disc of info from Animus' lab, which he hands over to Slate in the hopes of saving the boy known as File 13. And at Kord Omniversal, Melody makes a phone call...

Ok, I struggled with this issue. I read it and re-read it. I started writing, then deleted the words before staring at the screen. This issue just didn't grab me. Right out of the gate I had a problem. Ted rushes off to S.T.A.R. Labs and just leaves Dan's body in the street? It's weird to me! There's no mention about Dan or what happened. Did he get a proper burial? Did S.T.A.R. take his body when they picked up File 13? It seems like a glaring oversight to me. And Beryl. She's supposed to have a backstory with Dan, but this is the first time she's seen. Then for no apparent reason she's living in seclusion wearing a costume and mask? Why? This issue frustrated the heck out of me...except for one thing...that gorgeously freaky Mike Mignola cover! 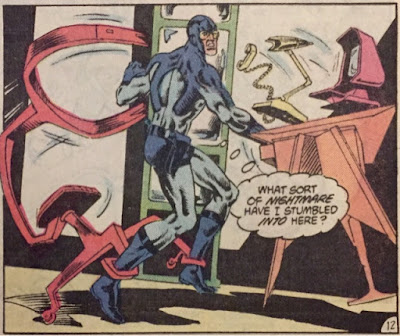 Who's Who '88 Justice League International

What's this you ask? Another Justice League International "Who's Who" entry? Why, yes, yes it is! This time with art by Ty Templeton.

Have you checked out the Justice League International: Bwah-Ha-Ha Podcast? If not, you should! If so...what do you think? 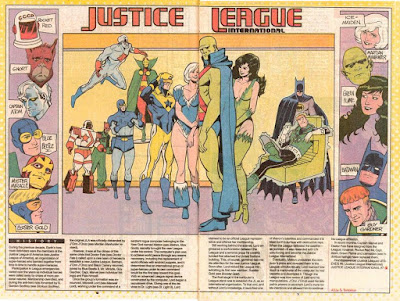 Yes, Beetlemaniacs, it's time once again for a Golden Age Blue Beetle adventure! In the third of 4 stories from issue #7, the Blue Beetle is on the trail of Arno, a super criminal that hides behind an iron mask. 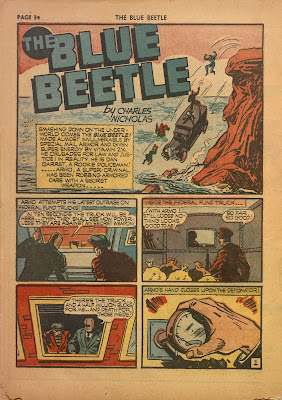 It's time for another thrilling Blue Beetle: 1st Thursday with Cully Hamner! Cully posted a link on his Facebook page to a Tumblr full of con sketches...and imagine my surprise when the first Blue Beetle I saw wasn't Jaime (as expected) but good ol' Ted!
Enjoy! 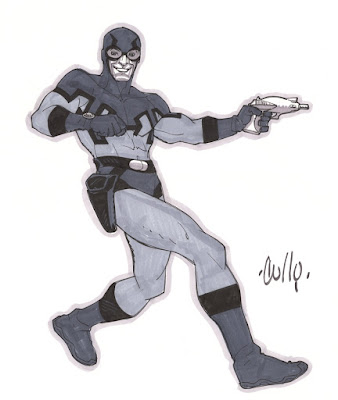