Spinning out of the crossover event "Millenium", Blue Beetle faces off against not one, but two villains! Len Wein, Ross Andru and Danny Bulanadi are here for issue #20, and a story called "Iran Scam!" 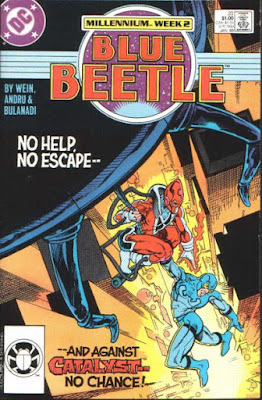 As the first caption tells us, this story takes place five seconds after "Millennium" issue #2. Blue Beetle is lowering himself from the BUG, only to find himself face to face with that jai alai master, Overthrow! Beetle doesn't have time for this...but Overthrow gives him a reason. The villain reveals he's the Manhunter assigned to Blue Beetle! Ted had figured it was Lt. Fisher, but nope...he's not that lucky. The duo trade blows and barbs across the rooftops, until Ted calls in the BUG for backup. 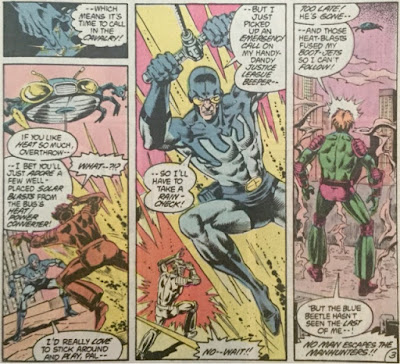 And with a couple solar-blasts from his ship that fry Overthrow's boot jets, the fight is over. Still, as Ted takes off Overthrow reminds him "No man escapes the Manhunters!"

In Iran a woman named Salima Baranizar contemplates an offer made to her by Guardians in "Millennium", while a man named Anderson follows her. 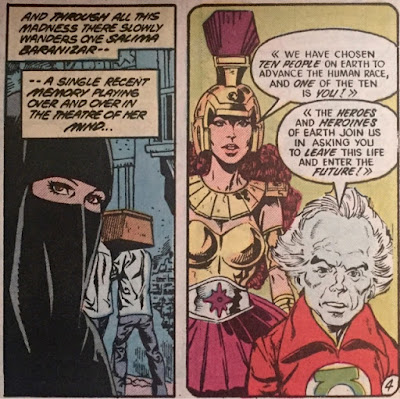 Anderson then relays his findings to Heimdall of the Swedish Secret Service. It seems they're worried for Salima's safety and pass the info to the JLI...allowing good ol' Ted to step in, and his teammates in the JLI to make a brief cameo. 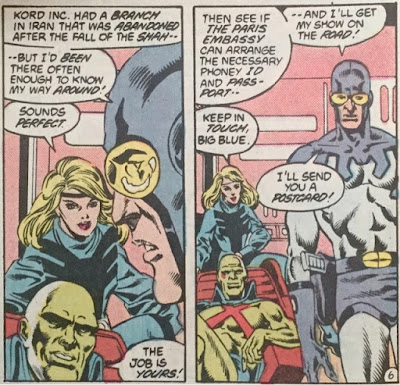 When Ted arrives in Iran he learns from Anderson that Salima has been arrested for blasphemy, while attempting to seek guidance from a local cleric. Ted dons his costume and heads out as Blue Beetle, silently making his way to the old Kord Complex that just happens to be located in Iran, and next to the prison Salima is being held at. Even more coincidentally...Catalyst is also in town, and also heading to the old Kord building, looking for the compound, XD-3, that Jeremiah Duncan hid there.

The story is interrupted by a news report. Fleur-De-Lis and Legionary of the Global Guardians have raided one of Dr. Cornelius' labs. Cornelius is furious and places a phone call to the Security Council. Reporting back at the Dome, Fleur-De-Lis explains that just as she found canisters that seemed to contain some kind of human experiments she was found by the guards. Luckily she did manage to free Jeremiah Duncan before making her escape. 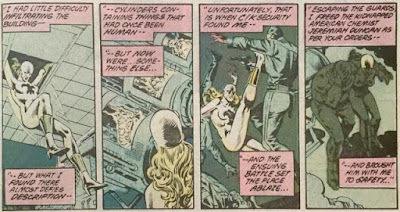 Blue Beetle watches from a window in the Kord building, trying to work out the patrol patterns of the prison guards, when Catalyst steps from the shadows! The villain grabs at the hero, burning his shoulder with a toxic grasp! Then another, on Beetle's forearm. Realizing he needs to keep his distance, Blue Beetle tries to disorient his opponent with a blast from the BBGun, but Catalyst's ability to control his body chemistry allows him to make a quick recovery. Ted tries a different approach, slamming Catalyst with a chair, then a table, but it's still not enough, another poison hand reaches for his throat! 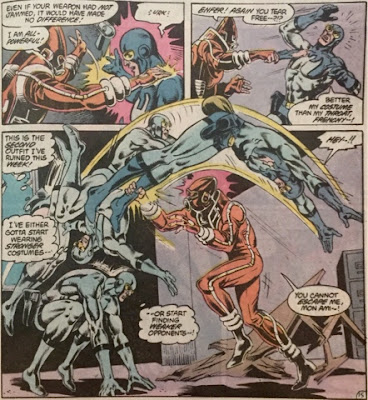 Tearing his costume, Ted manages to free himself, and leaps over the rogue, then manages to toss Catalyst into a wall. Blue Beetle leaps for a window, launching a grappling hook, but Catalyst is back on his feet and in pursuit.

The two fight, dangling from a wire over the prison yard, until Ted manages to knock his opponent down leaving Catalyst to be dealt with by the guards.

Once in the prison, Ted quickly finds and frees Salima, but getting her out is more challenging. Ted offers to take her to safety...to America, but she believes that America is the land of Satan. She believes the Guardians were sent by Prophet and that she needs to do their work in her homeland. She runs from Ted, and out into the streets intent on spreading this message...but is again accused of blasphemy, and this time is stoned to death. 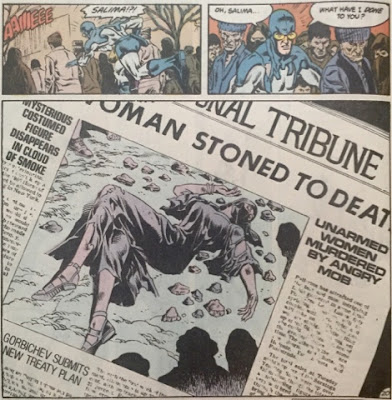 Back at the Dome it seems Cornelius' call to the Security Council has led to the Global Guardians being disbanded. And as Ted flies home to America, he wonders how his failure will affect the Millennium?

So...it's been a while since I've read "Millennium", and since the couple issues tie into it, I've been thinking about re-reading it, so maybe I'm not reading this issue in the proper context...but man this seemed dark! The religious aspect, the prison and then stoning for blasphemy? That's heavy stuff! In some ways, this put me in mind of issue #16, and the way it tackled homelessness. Don't get me wrong, I appreciate that there are problems and injustices in the world, but I tend to read comics to escape that. Add to that the fact that there was a LOT going on this issue, almost too much. We had two super-villains, an event tie-in, a JLI cameo, this whole Global Guardians thing that's carried over from last issue, and more...for me anyway it made it a little difficult to stay engaged. Not a bad issue, just not a favorite.