Blue Beetle is Back! 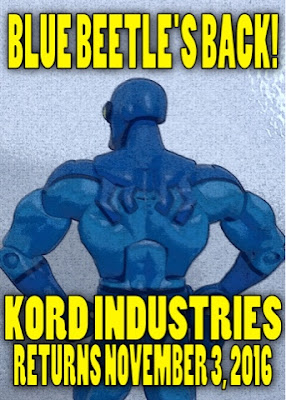 While trying to come up with a way to announce the return of the blog, I whipped up this image. I thought it captured the humor many of us associate with Ted Kord's Blue Beetle. Not only that, it's very accurate, albeit tongue in cheek...Blue Beetle is back! Keith Giffen and Scott Kolins are behind the return of Ted Kord and Jaime Reyes as part of DC's Rebirth. We're already two issues into the main book and it's already full of action...and questions! If the conversation I had with Keith Giffen at the Baltimore Comic-Con this year is any indication...things will be getting VERY interesting as this book goes on!

My post looking at the final issue of the 1986 DC run of "Blue Beetle" will be coming up in a couple weeks. Is that the end of Ted? Absolutely not! I have a plan, a way to keep Ted in the spotlight here at Kord Industries...it's a little "extreme" and in a way it involves time travel! You see where I'm going with this, right? 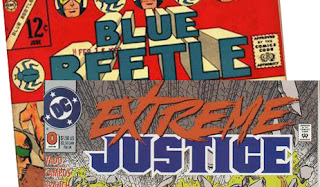 Starting in January I'm going to begin covering the 1960's Charlton adventures of Ted Kord, from both "Captain Atom" and his own book, and alternate that with the 90's DC team book, "Extreme Justice"...featuring Blue Beetle, along with Captain Atom and Booster Gold!

I know I said I was taking some time off this month...but this was way too good to hold back! The multi-talented Luke Daab (seriously....you should hear him sing!) recently mentioned drawing Blue Beetle on Facebook, and why he hadn't done it sooner. I replied, wondering why I hadn't asked for a commission from him sooner myself...after all, I do run a Blue Beetle blog! I messaged him and BOOM! The result is below!

Pretty fantastic huh?  Want to see more of Luke's work, maybe commission something yourself? Check him out at Daab Creative, and on Patreon! You'll be glad you did! 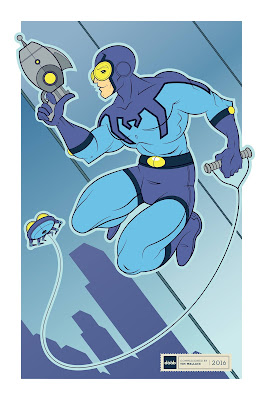