Bob Layton and Dick Giordano continue their tale of the Charlton Action Heroes in the DCU. The villain Avatar has been revealed as the former sidekick of Judomaster, but can our heroes stop him in time? Read on, as we look at "The L.A.W." #4. 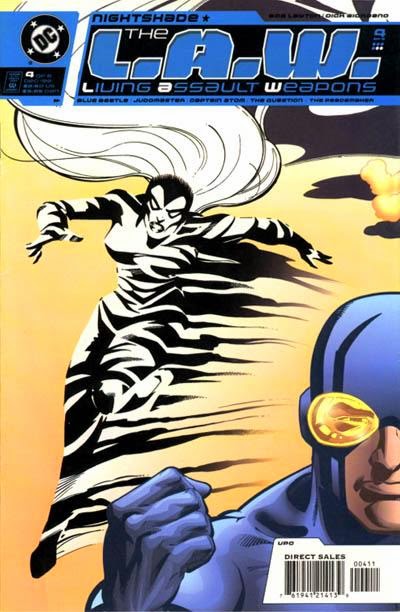 After last issues reveal of Avatar's identity, it's not too surprising that this issue begins with a flashback. It's 1944 and we get to see Rip Jagger, the Judomaster, and his sidekick Tiger (future villain Avatar) in action. They make short work of Japanese soldiers, and Axis villains, until WWII ends. Then they find a fight they can't win. The US government is still leery of the Japanese, and refuses to allow Rip to bring his young ward home to the States. Rip is upset, but decides to make lemonade out of these lemons. He'll take Tiger around the world "seeking out the lost secrets of the martial arts" until they're allowed to return to the US together. Before their journey begins though, he swears an oath that he'll never let any harm come to Tiger. 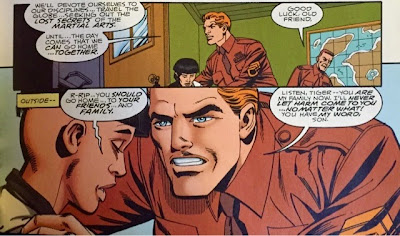 Jump ahead to 1953 and Tiger is sick of it. He wants a home...a life...not this. So he does what any angry teen sidekick would do...he runs away. Back in the present we learn that Rip, after years of searching, eventually gave up trying to find Tiger and made his way to Nanda Parbat. Once there he became a favored follower of Rama Kushna and achieved the pinnacle of martial arts mastery. He even tells Avatar that he knew he was Tiger from the moment Rama called him, and cast him out because of the coming evil. Avatar shares his own tale, of seeing children orphaned by war, fighting against hunger and despair. How this fueled his hatred of warmongers and led him to the legend of Parashrama, the slayer of the warrior caste. He eventually learned everything there was to know about Parashrama, including the location of the temple that held the deity's weapons and serum of immortality. After hearing all he needed to hear, Rip breaks free of his bonds and the two began to trade blows. 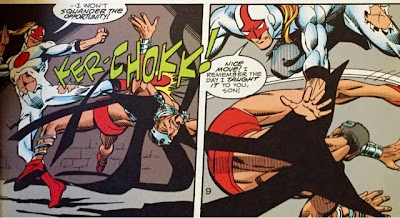 Praying for Rama's forgiveness, Judomaster strikes a deadly blow that stops Avatar's heart. He then frees what's left of Captain Atom and the story could have ended there...but then Rip recalls his oath. He can't let Tiger die. 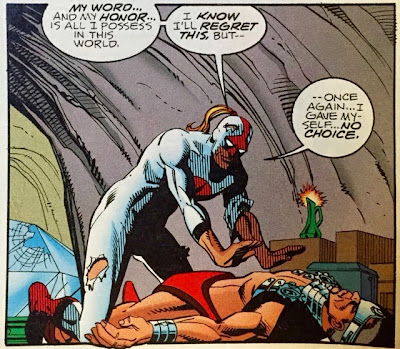 Back at Peacemaker HQ, Sarge Steel is pissed! "You revived him?!" He hammers his feelings home with a "Every drop of blood the Avatar spills from this point forward is on your hands, mister!" Steel then accuses his new lady friend Justine of being a traitor, before coming to the conclusion that she's not and Dr. Bhattacarja is! Sadly he's a little late on this, as Dr. B has already made contact with the revived Avatar and is already putting plans into play to take over the G.O.R.T. satellite. To make matters worse, Avatar unleashes another demon attack on a global scale! After reviewing security footage from the Peacemaker HQ, Steel comes to a terrible conclusion...Dr. B has been controlling him using his new cybernetic hand! Instead of tearing off the offending hand, he leads a security team to her room instead. (in fairness he does make an appointment to have it removed later) She's gone though, having locked herself in a secure room housing the controls of the G.O.R.T. While the security team tries to get access, Steel moves ahead with a plan B. Peacemaker (Mitchell Black), Blue Beetle, and the Question head off into space to shut down the G.O.R.T from there! 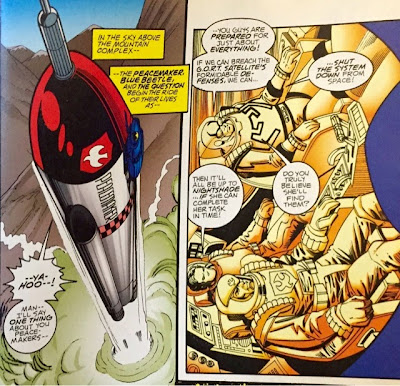 Meanwhile, in another dimension, Nightshade makes contact with Martian Manhunter...too bad there's a horde of Avatar's demons hot on her heals.

Well, that was interesting. Not much Blue Beetle, but interesting. We had a false stop, which makes sense, both from Judomaster's standpoint (he can't kill the kid he swore to protect) and the fact that we're only on issue #4 of a 6 issue miniseries. That said, even with everything going on, half the issue was flashbacks and then...well, I was hoping for more story progression.

We're almost to the end of this adventure Beetlemaniacs...what do you think?
Posted by Unknown at 12:00 AM 1 comment: 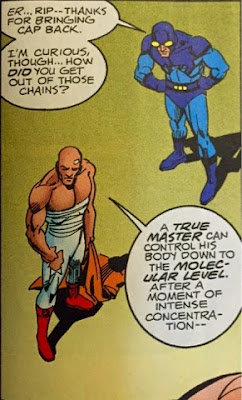 From Charlton's "Blue Beetle" #4, here's a cool pin-up page. I wasn't able to find any credit for the image, but it doesn't look like the normal art team of Bill Fraccio and Tony Tallarico. Any ideas who did this one? Leave your thoughts in the comments below. 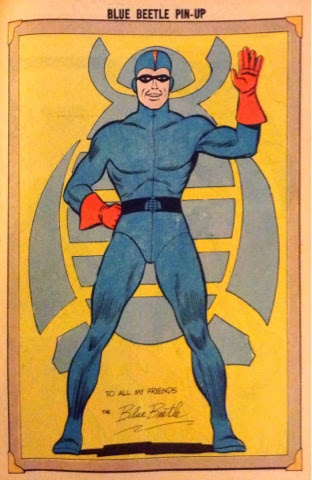 It's a great day at Kord Industries...we got a celebrity endorsement!* I was able to get actor Alan Ritchson ("Smallville's" Aquaman, Raphael in 2014's "Teenage Mutant Ninja Turtles", and "Blue Mountain State's" Thad Castle) to take a break from his busy Hollywood schedule to record this short video for the page...enjoy!


*Well, sort of...as a backer of the upcoming movie "BLUE MOUNTAIN STATE: THE RISE OF THADLAND" on Kickstarter, this Vine was one of my thank you's!
Posted by Unknown at 6:06 AM No comments:

Last issue Jaime helped save Alina, the daughter of Damper and Bonita of the meta-human gang the Posse. Keith Giffen, John Rogers continue weaving tales of the Blue Beetle, with Cynthia Martin and Kevin J. West on pencils, and Philip Moy and Jack Purcell on inks. Part two picks up a little while after the events of part one. Peacemaker scouts an area outside a mysterious compound in the desert, noting that someone has already been there and disabled several pieces of security equipment. Who would have done this? Blue Beetle and the Posse! Jaime has used the scarab to track Bonita & Damper's baby here. Wait, what? I thought Peacemaker saved the baby from Bottom Feeder last issue? Hmmm...anyway, Paco stays behind with the jeep, as Jaime and the Posse (Damper, Thumper and Pinata) plan their attack on the compound. Using Damper's cloaking ability the team sneaks inside only to find...it's actually a peaceful metahuman community! Well, a highly secure, but peaceful community...under lock down. Things seem to be going well on their little recon mission, until an alarm sounds.

Makes sense that a gated community of metas would be able to detect other metas. Once they get spotted it's time for a super-powered throwdown! Damper demands to know where his baby daughter is, but never gets an answer. One meta inside, a girl named Spinner, has the power to swap peoples power. She grabs Thumper and Pinata, and neither one can control the other ones power. Thumper blows up, Pinata bounces uncontrollably, and chaos ensues. 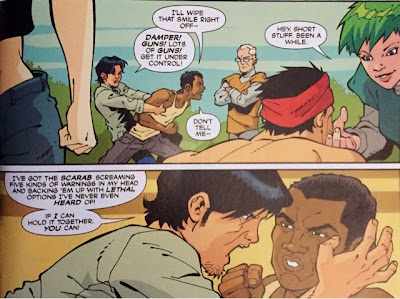 Jaime activates the scarab and Blue Beetle steps in to even the odds.


At that same time, Paco (who had waited behind with the jeep) is surprised by armed guards on motorcycles and a chase ensues! When he looses control and finds himself on foot, it's Peacemaker who shows up to save the day! 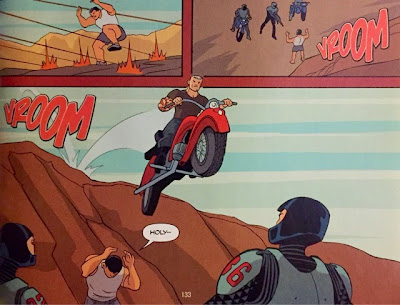 Back at the meta-community it's "Headmaster" begins leeching energy from nearby guards to grow tentacles and lash out at Blue Beetle. 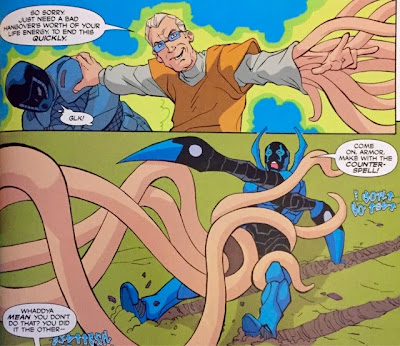 It looks like Jaime may be in trouble, until he figures out that if he keeps the Headmaster away from a power source he'll go down easy. That's when our hero snatches the man up and takes him high into the sky...and that's where the Phantom Stranger makes his return! Apparently there was some sort of magical shield around the place that blocked the Stranger...until Jaime flew above it. They return to the compound, in time to see two things...the Posse surrounded by guards, and duh-duh-dunn...Brenda's aunt Tia Amparo, finally revealed as the mysterious La Dama! 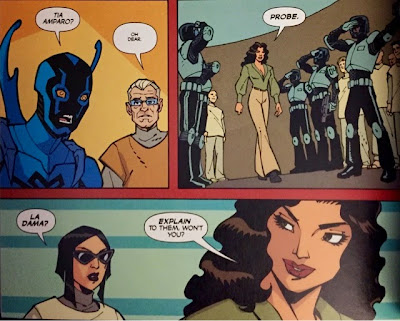 Probe makes a return as well, to explain that she's here by her own choice. The compound is a safe place for metas, a place where they can learn from each other without fear or persecution. Blue Beetle and the Posse don't see it quite that way. The Phantom Stranger says Jaime led him to "her" (La Dama) and something about a new age of magic. The Stranger confronts her and they debate whether she's breaking some kind of truce by hiding the metas. She says she's not hiding them, she's protecting them...besides they're free to come and go as they please. Phantom Stranger seems satisfied, for now, and disappears. La Dama then pulls Jaime into a private meeting to tell him he'd better not mess up her plans, or hurt anyone she cares about, namely Brenda. She also admits she killed Brenda's abusive dad to protect her niece... implying she'd do the same to Jaime. He takes her threat, and ups his...if she messes with him, he'll come back at her. So they agree to a truce...and then Peacemaker busts in with Paco informing Jaime that the scarab isn't magical...it's alien!

Now, it took me a while to come around and enjoy Jaime's adventures, being a dyed in the wool Ted fan. That said I've been enjoying this "new" Blue Beetle...until now. This issue left me very confused. Things happened quickly, and seemingly out of sequence. The last time we saw Alina, the baby, Peacemaker "saved" her during the fight with Bottom Feeder...how'd she end up in La Dama's compound? The Posse arrives looking for Damper's baby, and then not only don't they find her, but they never mention her again the dust clears. Stories like this always make me wonder, "what happened?" Did an editor step in and force a shift in the story, derailing the writer's original intent? Here's hoping things get cleared up a bit next month.
Posted by Unknown at 12:00 AM No comments:

Oh, Fox Features Syndicate...you sure don't make it easy for a blogger to post golden age Blue Beetle stories with any consistency, lol

Issue #1 had a short "new" story, followed by reprints of other short stories from "Mystery Men", issue #2 had a whopping 8 stories, while issue #3 had two 30 page adventures. Which brings us to issue #4. This issue has 3 stories, one of which is a two parter! 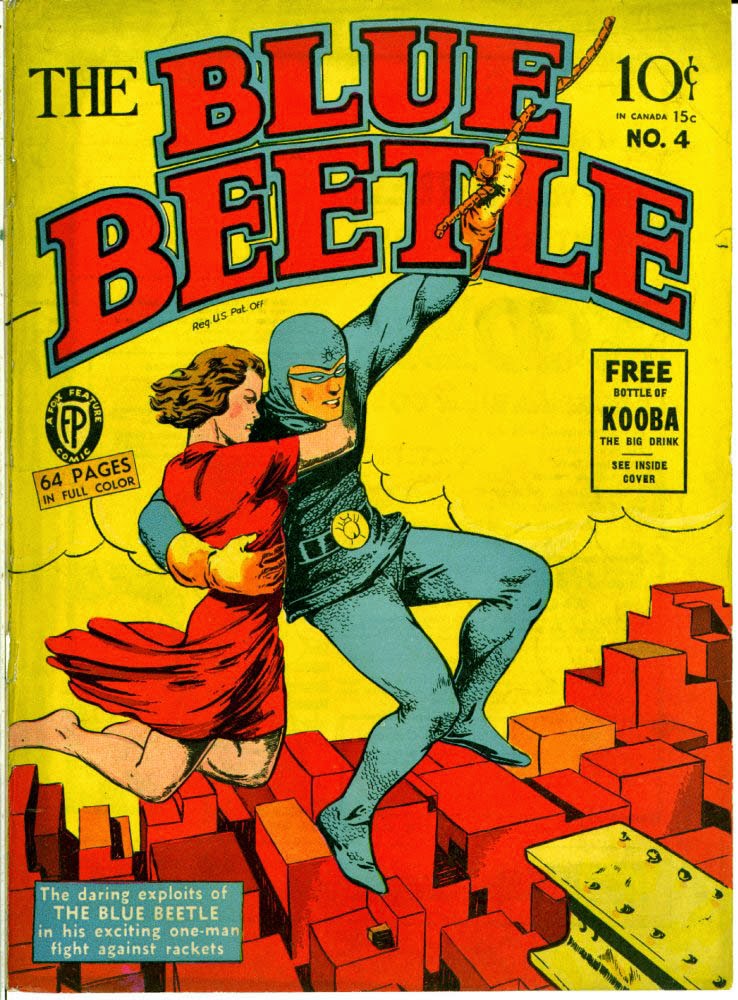 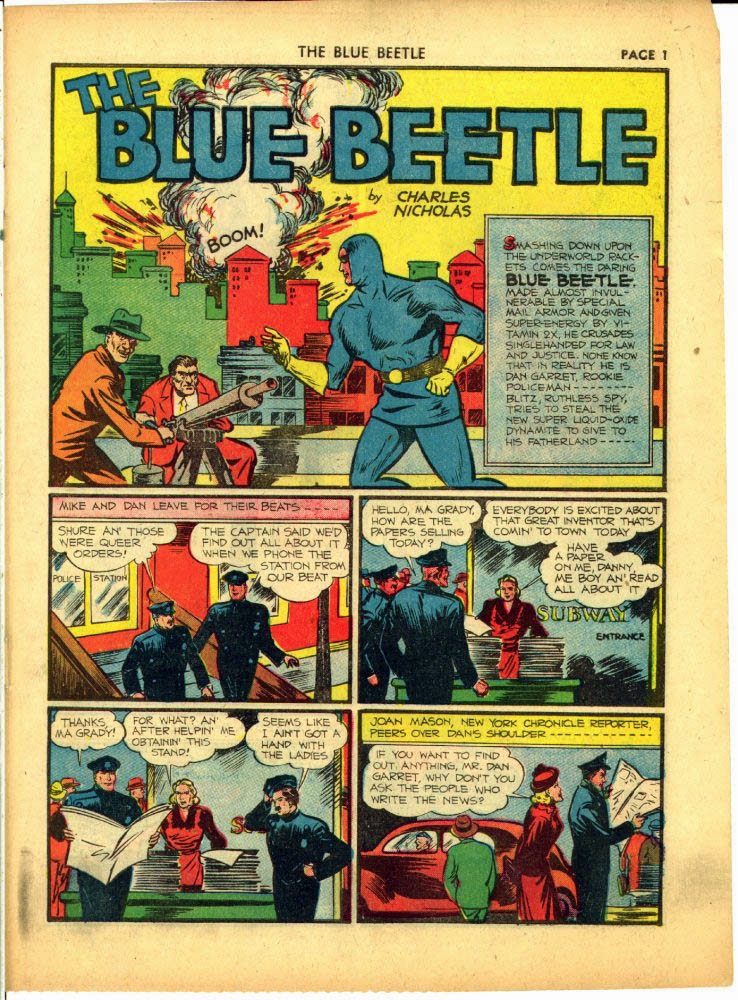 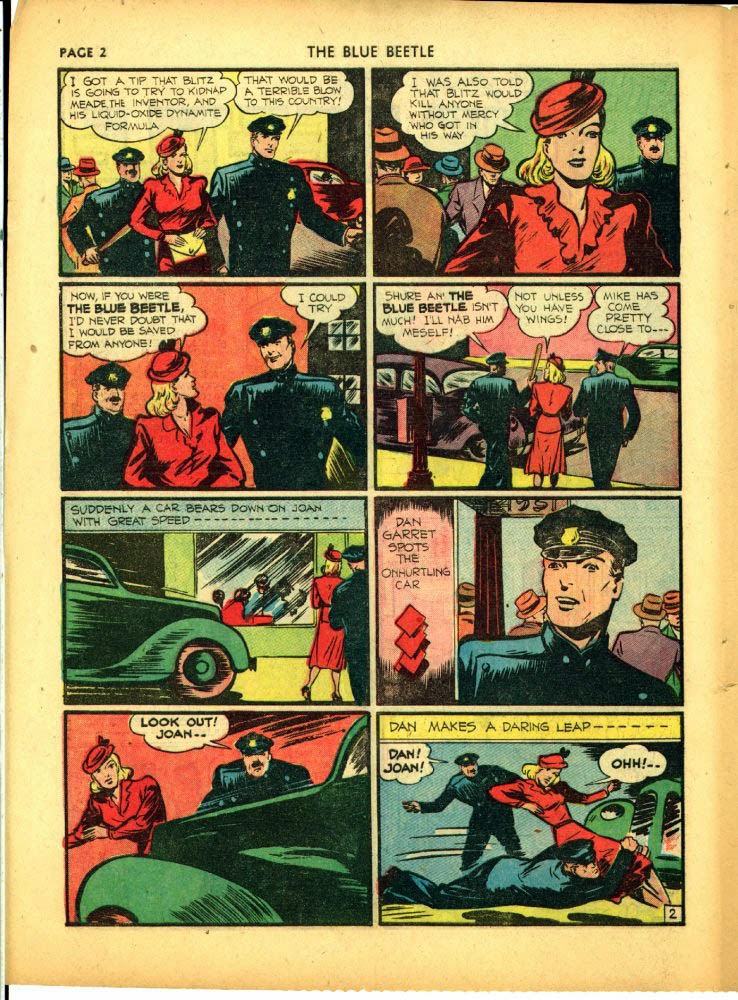 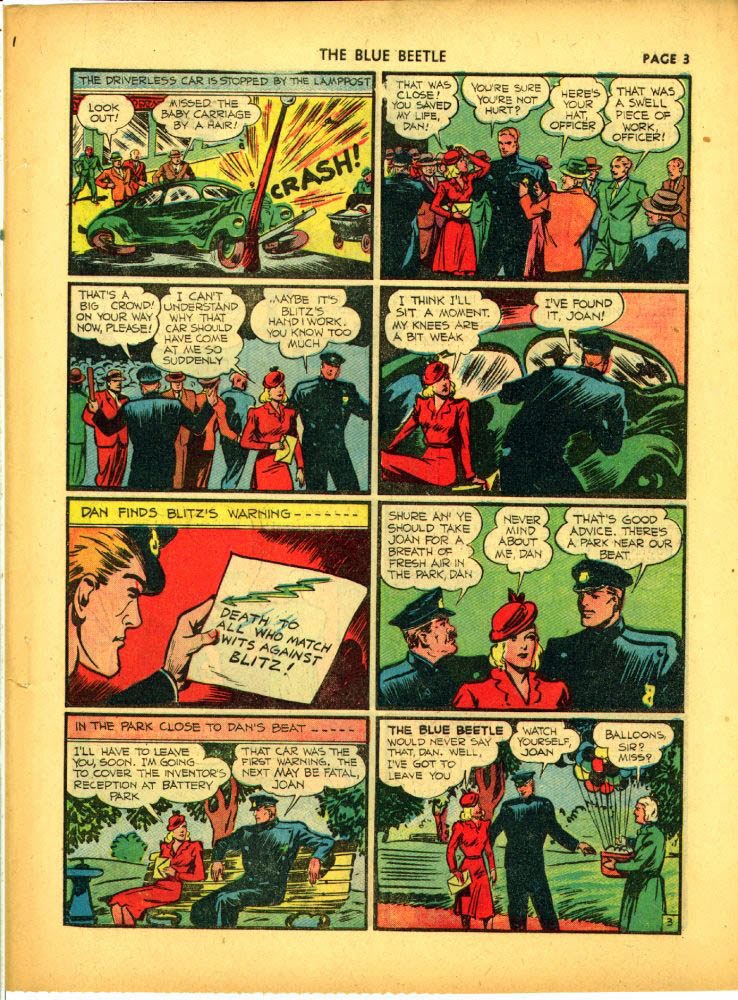 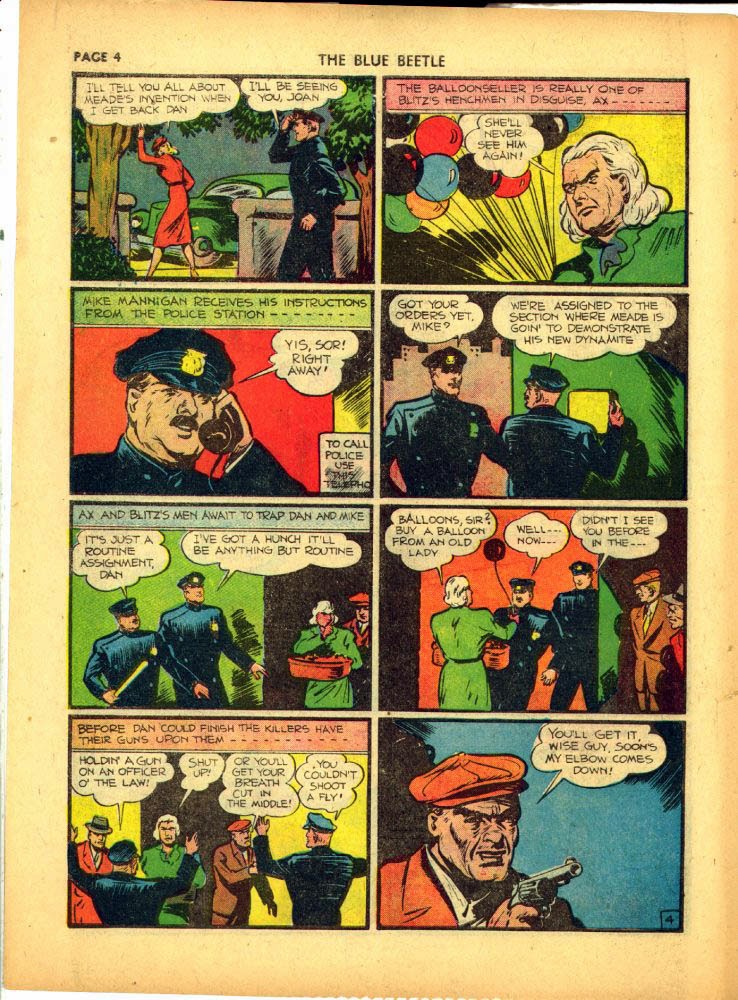 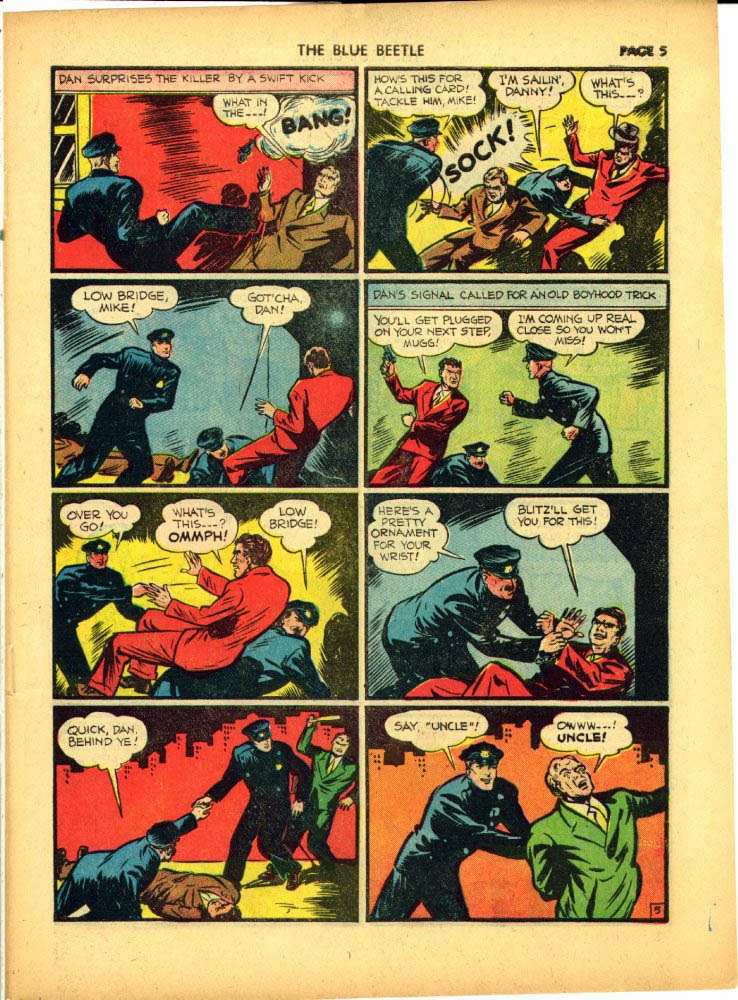 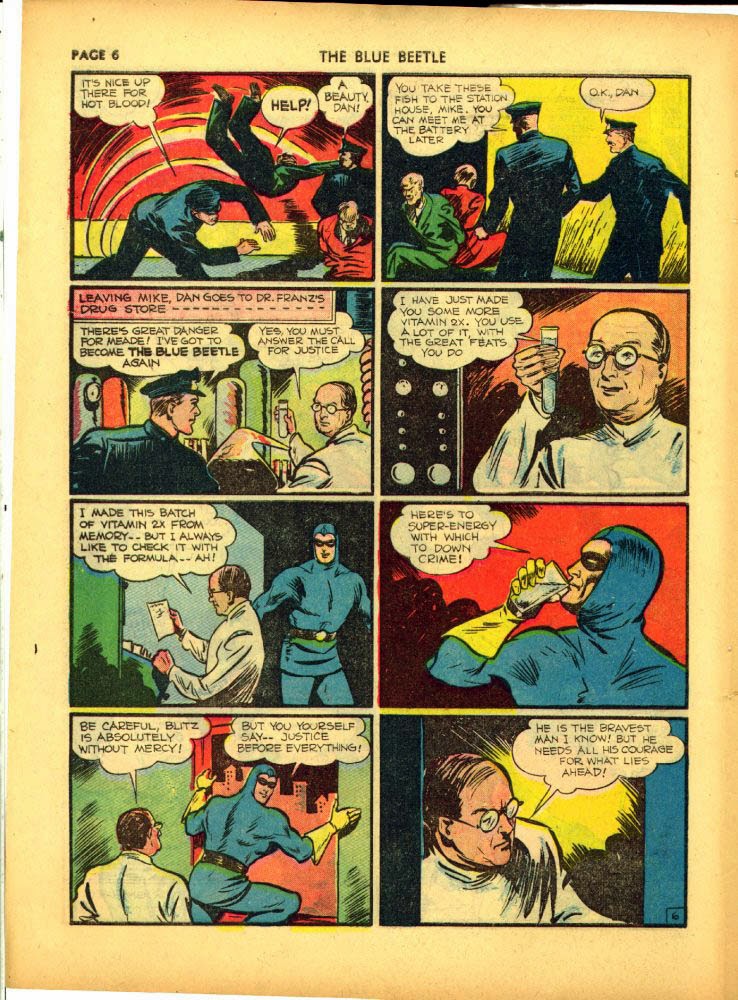 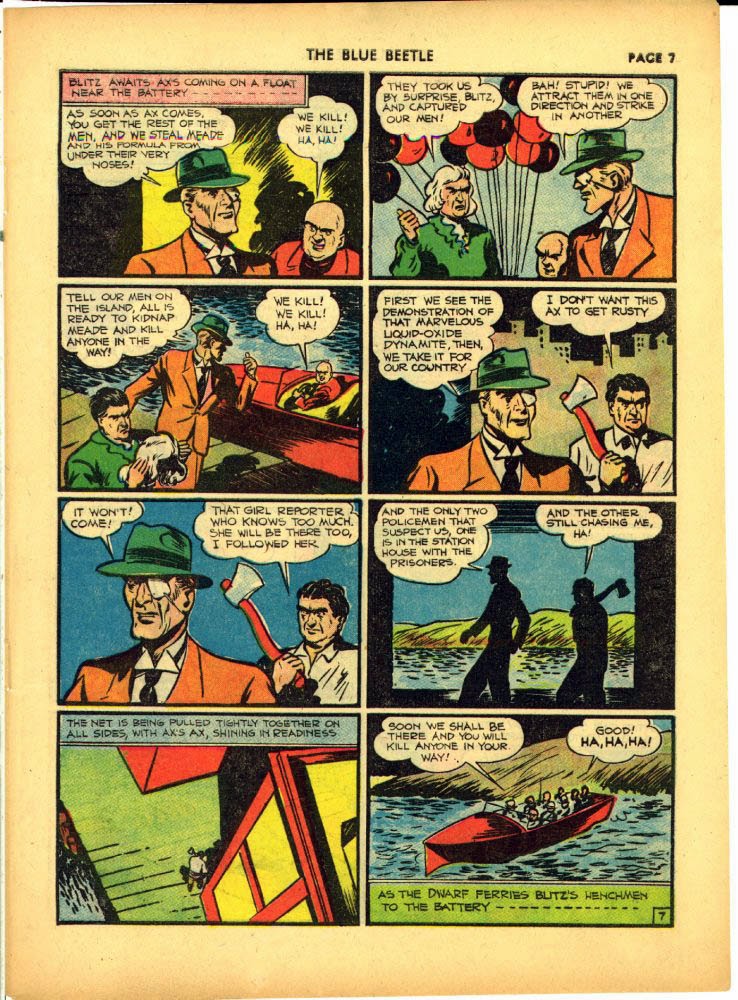 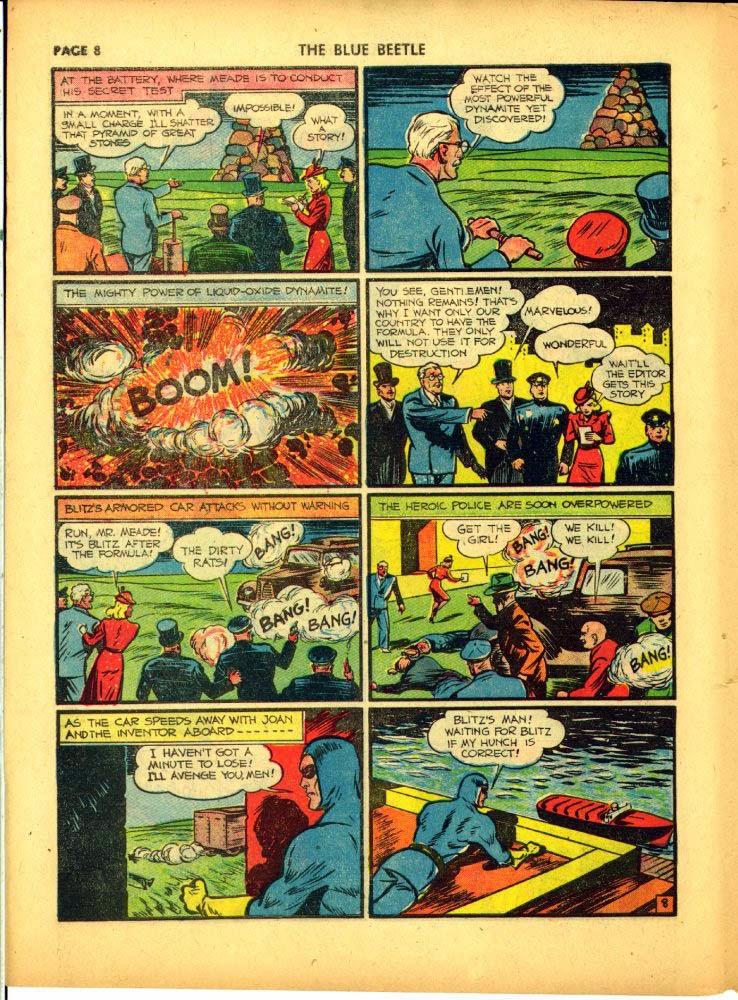 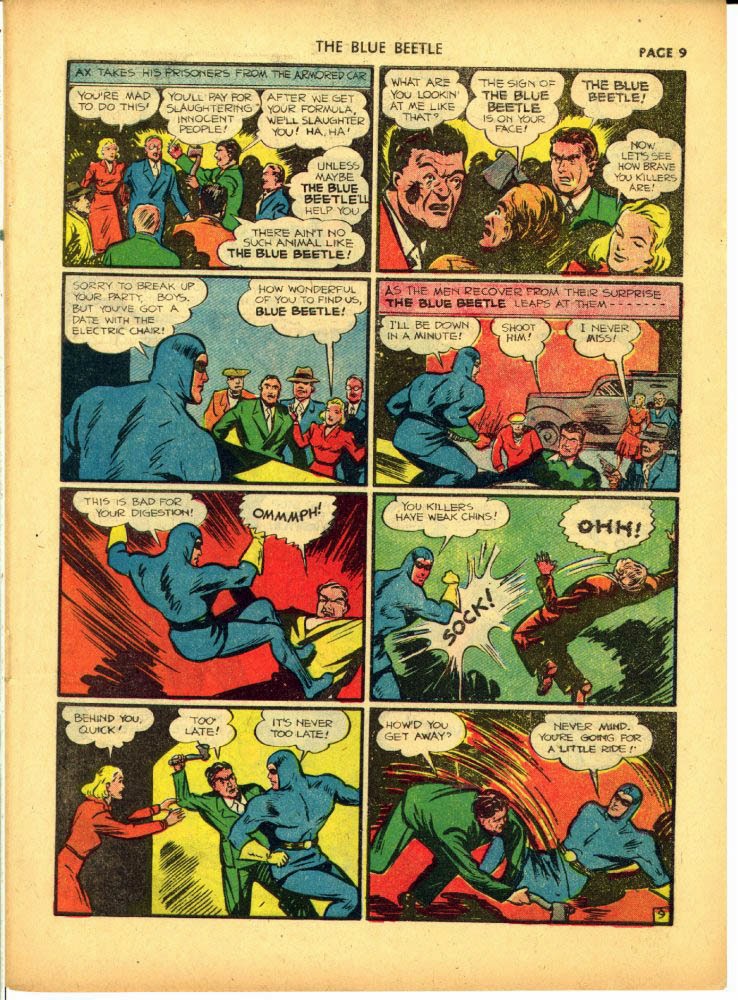 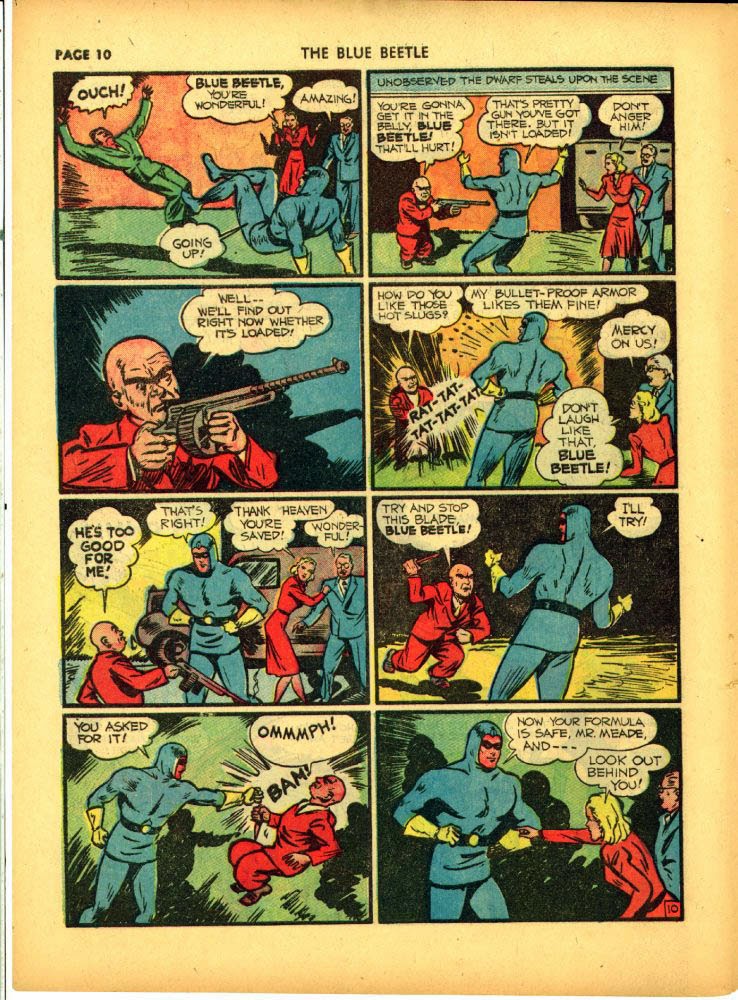 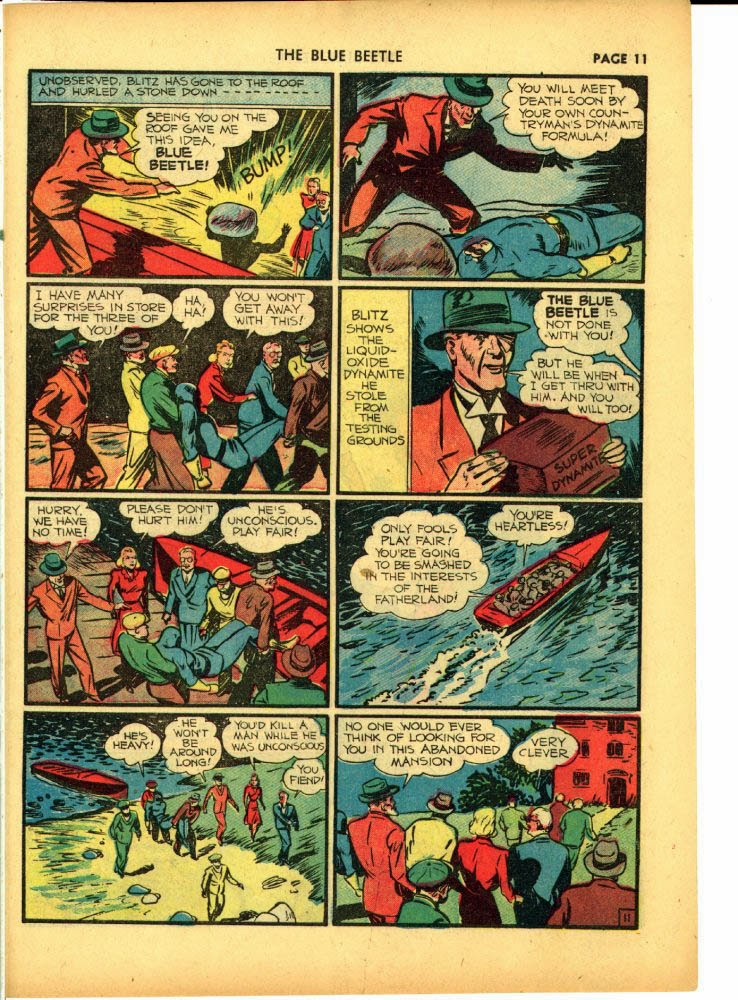 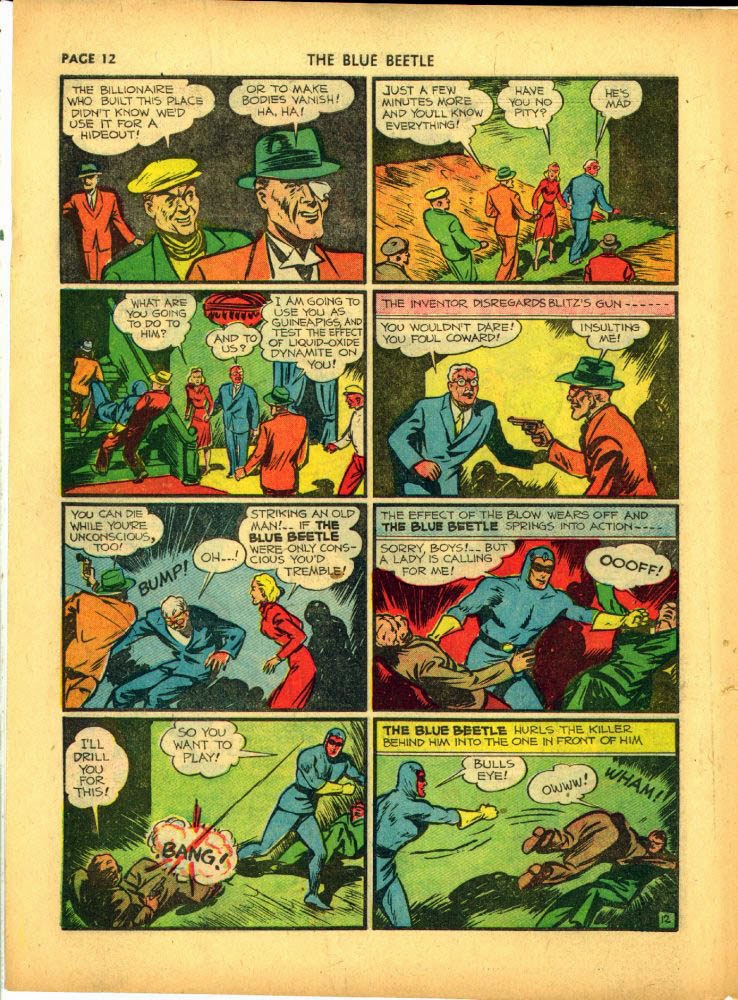 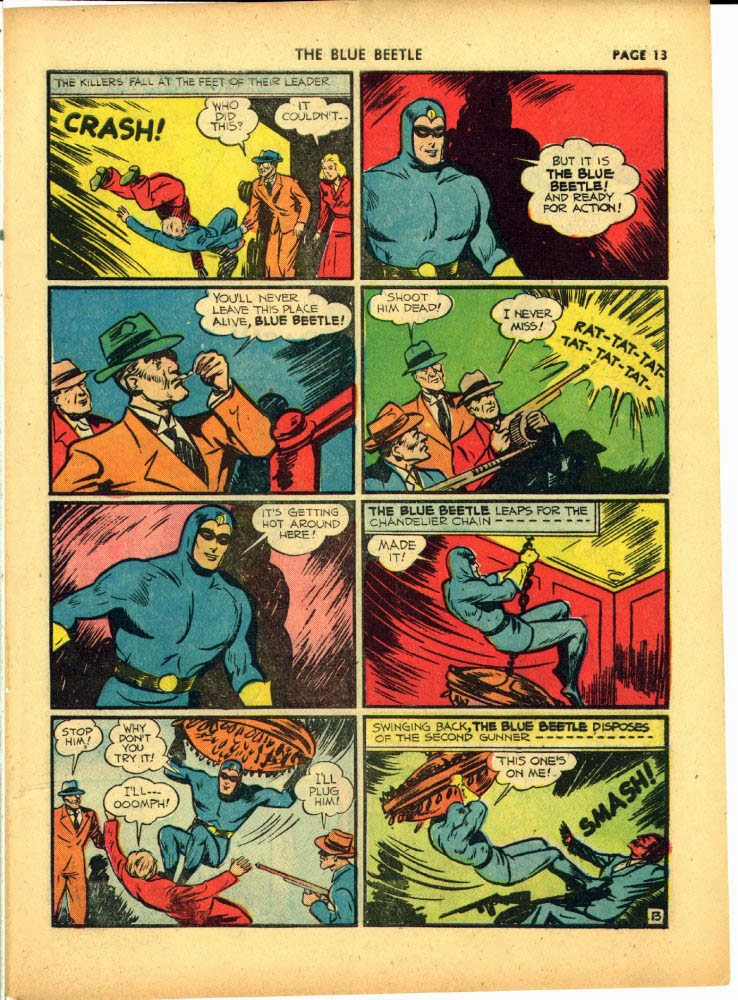 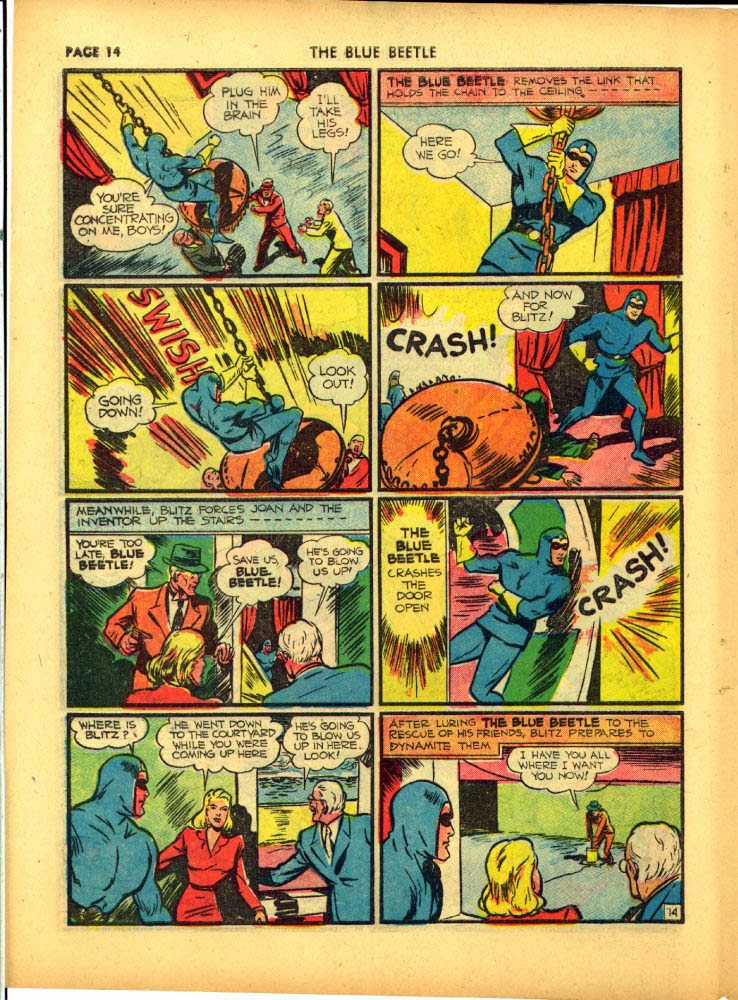 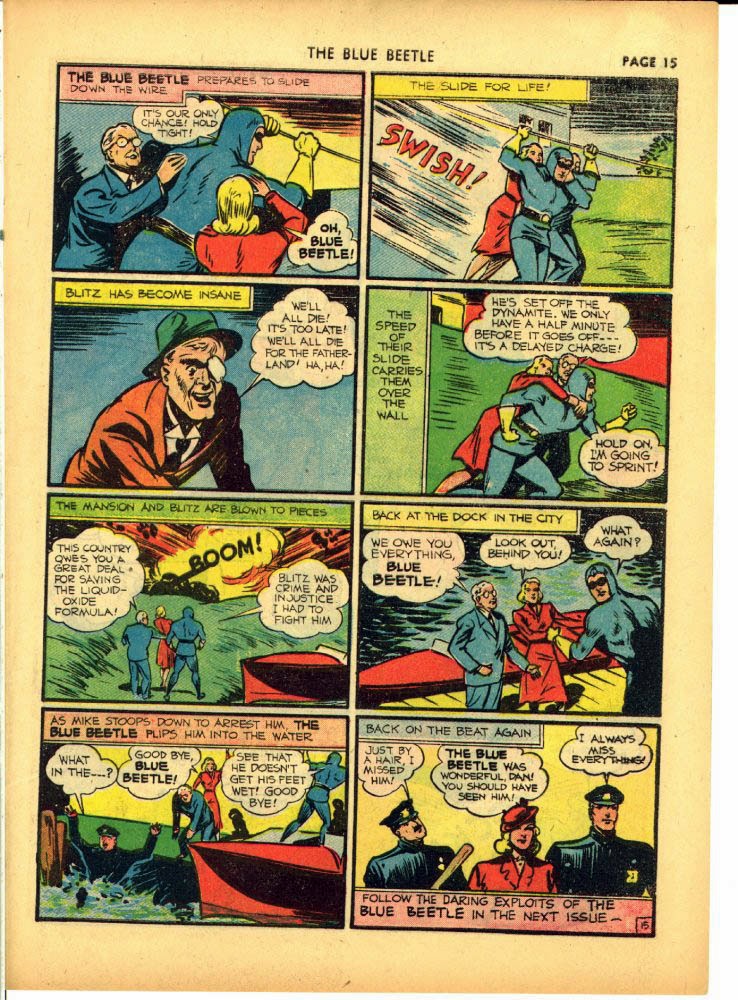 You like Blue Beetle right? Of course you do, that's why you're visiting a Blue Beetle blog! Do you like the Muppets? Then enjoy this Blue Beetle/Muppets mash-up I picked up from the incredible Roger Langridge at the 2013 Baltimore Comic Con! 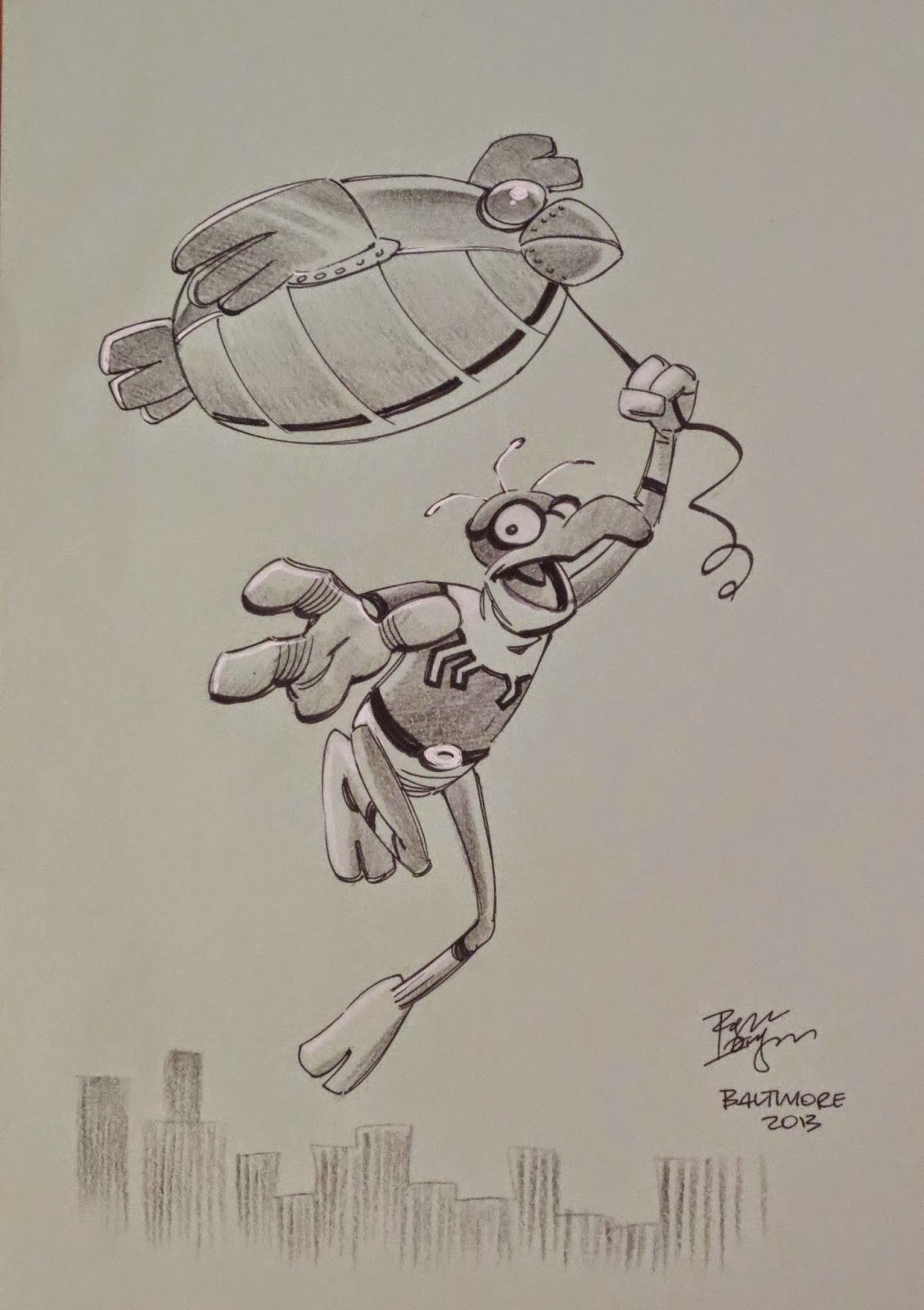