"The Past Is Another Country"

Jaime Reyes had been missing for a year, but for him no time has passed. So why is his family so surprised to see him? Keith Giffen and John Rogers return to weave another tale of our insect hero, with Cynthia Martin on pencils, and Philip Moy on inks, for "Blue Beetle" #3! 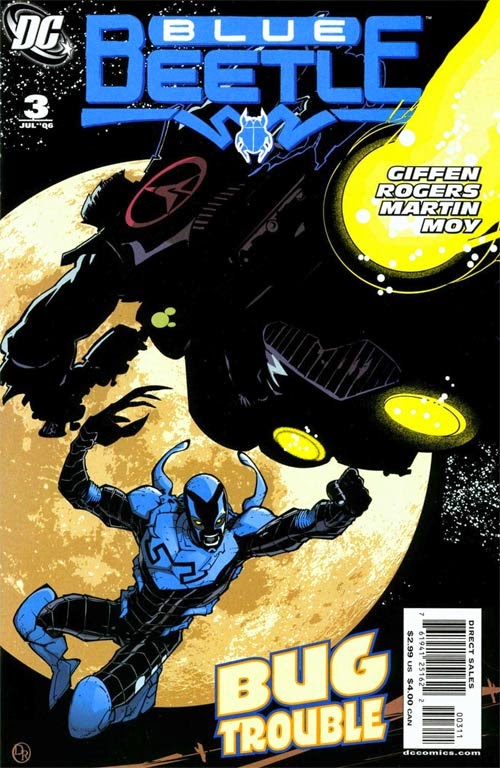 This issue opens, not with Jaime and his family, but at an out of the way gas station mini mart. Inside a lone military man thwarts an attempted robbery. Not because he's a hero, but because he's "dreaming the blue dreams and following the trail." Apparently he has a friend in the area, a friend who "just doesn't know it yet." 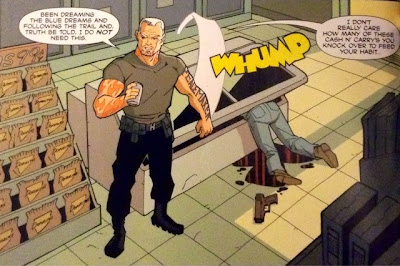 Meanwhile, back at the Reyes house in El Paso, Jaime tries to account for the missing time. "No, I helped Superman. It was the crazy Green Lantern who tried to kill me, after. The the redneck trucker gave me free pants." Needless to say, they don't believe him. Not until he suits up that is. Then his sister, Milagro, screams and runs, quickly followed by his mother. Oddly, or maybe comfortingly, his dad takes it all in stride. He'll talk things over with Jaime's mother, for now though it's best if Jaime leaves...his dad hands him a cell phone, saying he'll call Jaime when everything is ok. 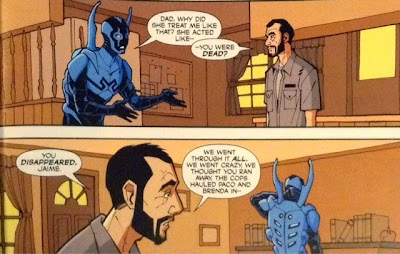 Jaime heads off into town, exploring his new powers. "I can fly. That's got to count for something." Landing on a rooftop, he asks the scarab to show him a few more features. It turns on something akin to Superman's super hearing and telescopic vision, before creating shields, swords, the jaws of life, and energy blasts! Not too shabby! It then reveals another trick...when transforming back into plain old Jaime, the scarab can create clothes! "Now you show me this...yes it would have been useful." Jaime leaves to look for his friends, Paco and Brenda...but accidentally leaves the phone behind.

Unable to find them at school, and seeing Brenda's old house for sale, Jaime's not sure where to look. Until the scarab reveals another trick...it can track anybody Jaime's met since the scarab bonded with him. It seems Paco is at the border to Mexico with Damper, of the Posse, and they're being trailed by some guys who look like they belong with Will Smith in "Men In Black". They're working for someone called "La Dama" 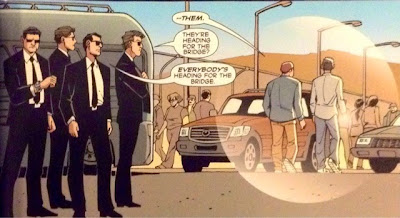 Apparently La Dama wants them to bring in a member of the Posse, and Damper fits the bill. Luckily for Paco, and Damper, the scarab has led Jaime to them in the nick of time as the MIBs prepare to fire some energy weapons. Blue Beetle makes the save, creating a shield to block the blasts. 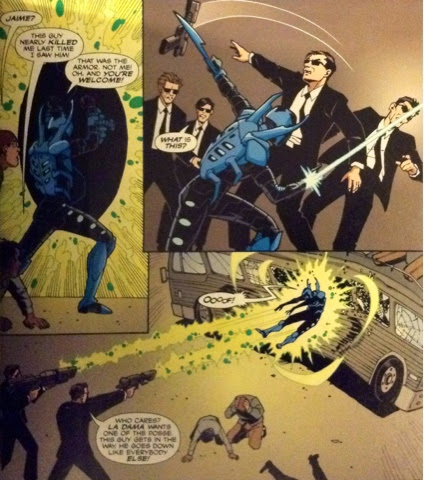 A brief fight ensues, but gets interupted by the appearance of Homeland Security. Jaime grabs Paco and takes to the air, presumably leaving Damper to fend for himself and fade from sight. They head to Juarez, Mexico as Jaime explains that the night Booster Gold grabbed him and took him to space, "That big fight is the last thing I remember."* Paco fills Jaime in on somethings. Brenda's dad died in a DUI, but no great loss...he was beating her! Luckily, her aunt took her in and she's now living in a big mansion in Juarez. Brenda gives Jaime a punch "for making me worry!", but follows it up with a hug...curiously, La Dama, is watching nearby! 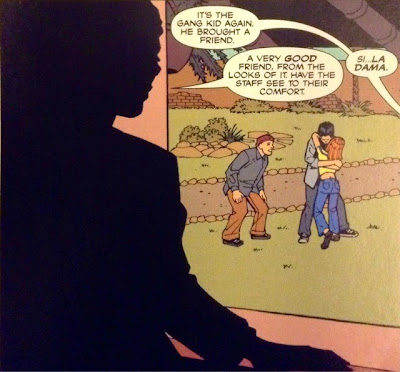 I have to say, the tattoo on the guy at the mini mart, "Peacemaker" got me curious and I did a little search. That gentleman dreaming "blue dreams" is none other than Christopher Smith, the Peacemaker, as in Charlton Action Hero the Peacemaker! Looking forward to seeing where that goes! Lastly, I need to acknowledge Cynthia Martin and Philip Moy's art...it is gorgeous and flows almost seamlessly with with Cully Hamner's work on the previous two issues!