"Blue Beetle and Booster Gold are back!" screams the cover of "Justice League 3000" #12, "But for how long?!" Let's take a peek at what the old JLI team of Keith Giffen and J.M. DeMatteis, with Howard Porter on art, have in store for our heroes... 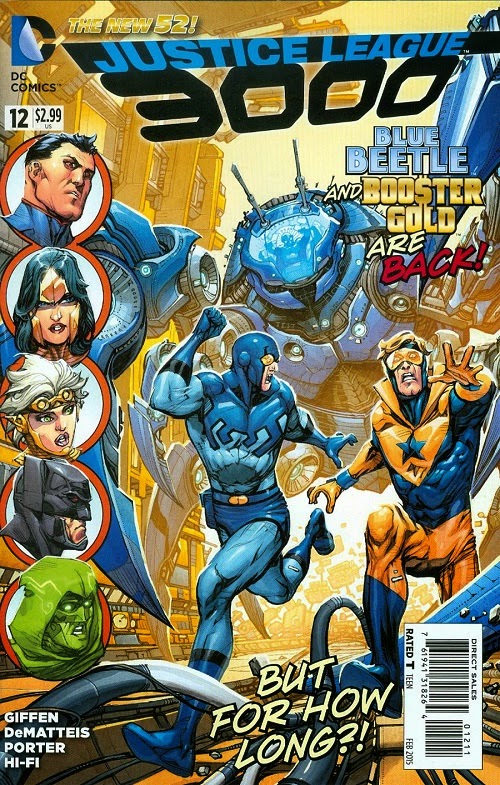 Issue #11, ended with the discovery of Blue Beetle and Booster Gold's cryogenic frozen bodies being found by a construction crew. This issue opens with Ted waking up from a dream where he and Booster were in suspended animation for 1,000 years. He stumbles from bed, only to discover...it wasn't a dream! A little while later the Blue & Gold duo meet with Sheriff Tariq, of the prison planet they've now found themselves on. They have no memory of how they got frozen and buried, let alone how they ended up on a prison planet. As Ted says, "They really screwed the pooch." The last thing either one recalls is a surprise birthday for Ralph (Dibny, the Elongated Man), and Max (Lord) yelling at them. The Sheriff hopes they can help fill in some blanks in history, the 31st centuries records are a bit spotty...all they know of Beetle and Booster is that they had connections to a vigilante group known as "Super Buddies". The Sheriff leaves them to get settled but asks that they stay close...and in classic Blue & Gold fashion they immediately decided to run off and explore. What could go wrong?

At Cadmusworld, Terry (who looks like Jack Frost from "Rise of the Guardians") and Convert (a pink skinned alien) debate the pros and cons of letting "Beagle and Buster" roam free.

Convert argues that their knowledge of the 21st Century could be beneficial. Terry's not convinced though, not until Convert adds that they were once members of Justice League International!

Meanwhile, as Booster and Ted explore their surroundings, realizing this prison city is actually a future version of New York. Ted figures that if he can find the remains of Kord Industries' New York office, they may be able to escape. 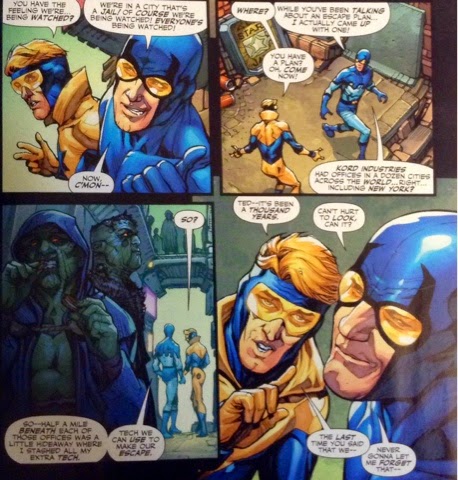 Convert (?) reappears, this time as a blue skinned alien woman, to stir up some trouble. Seems there's already a "Blue Beetle" running around this prison world! The son of one of the workers who built this prison found some "ruins"...so the son decided to don the costume and run around the prison world capturing criminals. Convert says it's amused them up to this point, but he needs to leave Beetle and Booster alone. Problem is, he doesn't like someone else running around in "his" costume. 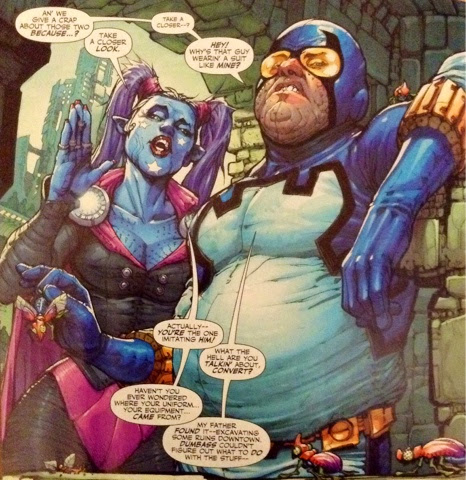 Wonder Woman blows off some steam slaughtering demons. While Batman, Superman, Flash and Green Lantern discuss what to do with their new castle, a gift from King Arthur. Wait, what?! I definitely need to catch up on this book!

Back on prison world, Beetle and Booster find Kord Industries...and Ted's stash! While they joke about Ted getting all his money from his dad, and Booster getting his by marrying older women, the super duo miss the fact that they're being watched. Booster does suddenly realize that he's missing his Legion flight ring, though. He also notices a booby trap! Someone else has been here before them! Ted's a little less concerned...especially when he spots his beloved BUG! And someone has done some upgrades on it, and cleaned it...and claimed it as their own! "There's only room for one Blue Beetle in this city" he declares, descending on our heroes in some kind of Doc Ock looking harness. 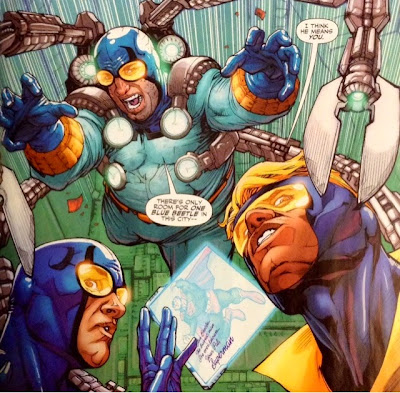 Beetle and Booster get in a few punches before Booster calls for a retreat. They're out gunned! This impostor has a technological advantage. Ted doesn't want to leave though..."But it's MY STUFF!" Before he can convince Booster that they should stay and fight, the fight comes to them! The impostor gives chase in the upgraded BUG. 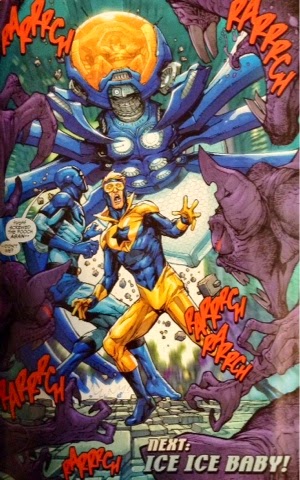 Quick note/confession...I haven't been reading "Justice League 3000". I did pick up the trade (containing issues 1-7) but haven't finished reading it yet, and issues #11&12. I'm familiar enough with the concept (imperfect genetic duplicates of the JLA set in the 31st century) but maybe not the intricacies. So if you are...and I stumbled or misread/misinterpreted something, please help me out by leaving a comment to fill me in. With that said, having read this issue it's probably not that big of a deal, as this focuses mainly on Beetle and Booster. I do plan to read the trade and catch up though, because what I saw here was very cool!