Posted by Unknown at 6:36 AM No comments:

“Because You Demanded It –“

“Because You Demanded It –“, that’s what the starburst at the top of the opening splash page announced. I wasn’t sure I demanded anything, I mean I’d only just started collecting comics and I’d never heard of the guy before, but Superman was in the first issue of “Secret Origins”, and this Blue Beetle guy was headlining issue #2 so he must be pretty important too, right? Well, I guess importance is in the eye of the beholder. Some people don’t think much of Blue Beetle, some have no idea that the character has been around since the late 1930’s*, and some don’t even know he exists at all. After my first exposure to him though I was a fan, and was sure he was going to become an A-list DC character…well, he became a character alright, bwah-hahahahahahahaha! But let’s not get too far ahead of ourselves. I want to take you on the same introductory journey I had.

“Secret Origins” #2 is a great retelling of both Dan Garrett and Ted Kord’s Blue Beetle origins by Len Wein and Gil Kane. Dan Garrett, professor, archaeologist and a bit of a bad-ass, heads off to Egypt in search of a lost tomb. Before he leaves, though, we’re also introduced to one of his students Ted Kord. Ted’s a pretty bright guy majoring in electronics and taking Professor Garrett’s history class because he figures you can never be too smart. Garrett heads off to Egypt and in no time finds himself at dinner with a lady archaeologist AND in a fight with a dictator. See what I mean? Bad-ass! Once back at the dig site, they uncover the tomb of the Pharaoh Kha-Ef-Re, whose sarcophagus is guarded by “an ancient azure scarab – like some sort of BLUE BEETLE!” Once he touches it, Dan finds himself face to face with…the ghost of a Pharaoh? A god? It was never exactly clear to me to be honest. In any case the being charges Dan to use the scarab to rid the world of evil with the power of THE BLUE BEETLE! Meanwhile the dictator prepares to bomb the tomb, which Dan sees with special super vision, just from holding the scarab! He quickly speaks the magic words “Kaji Dha!” to release the power, and costume, of the Blue Beetle to save the day. The bomb explodes and somehow animates, and enlarges, the mummy of Kha-Ef-Re, which Dan takes out with ease before smashing the dictator’s plane and the lady’s heart. “I’m afraid there can no longer be an ‘us’, pretty lady. I have a sacred mission now…” Yep, Dan, kind of like Bogie in “Casablanca”, decides he can’t be tied down and it’s best if he fights evil as a bachelor.

Flash forward a few years and Ted tracks down his old professor for some help. Ted’s mad scientist uncle, Jarvis Kord, has used Ted’s knowledge and expertise to help him create an army of dangerous robots as part of a plan for world domination. Ted has managed to track his uncle to Pago Island, and thinks Garrett’s archaeological experience (he has no idea about the Blue Beetle) may help locate Jarvis’ hidden lab. The moment they land Dan and Ted are attacked by, you guessed it, dangerous robots! Figuring he has nothing to lose Dan shouts the magic words “Kaji Dha!” and starts kicking robo-butt! Not willing to accept defeat, Jarvis cranks the power up, to eleven, but that overloads the system. The resulting explosions kill Jarvis and fatally wound Garrett, who’s dying wish is for Ted to take over for him. Ted swears to carry on the legacy of the Blue Beetle, but before he can get his hands on the scarab, the floor of the lab begins to collapse and Dan is swept away under the rubble. Once off the island and back home Ted decides the best way to carry on is through training and technology, and within 3 short pages we are introduced to the NEW Blue Beetle!

Indiana Jones style archaeology, giant mummies, mad scientists, robots, superheroes…in my young hands I thought this book had it all! I needed to find out more about this Blue Beetle guy! And all I had to do was wait 30 days for the first issue of “his own monthly magazine” according to the final caption box.

Luckily, you just need to wait 7 days till the next post! See you then! 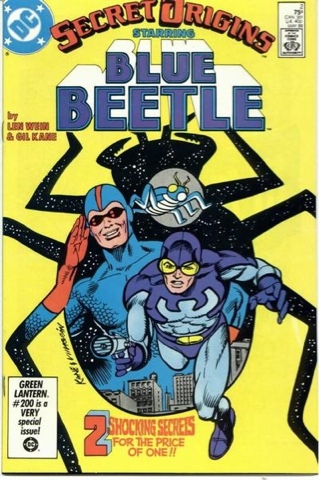 Posted by Unknown at 7:54 AM No comments:

“Echoes of Future Past!”

1986 was a big year for me…it was the year I started collecting comics. Sure I’d read plenty before that, my grandparents had a stash they kept for us grandkids to read when we visited, Batman, Superman, Spider-Man, Captain America and some Archie and Disney titles too, and I’d managed to pick up a few others off countless spinner racks when I’d been good while grocery shopping with my mom, but it was actually Christmas of 1985 that I received my genuine comic book collecting kit. I’d circled it in one of the catalogs that year, probably Sears or JC Penny, and Christmas morning there it was under the tree! A long box decorated with generic comic panels, with a few bags and boards, a small price guide, and reprints of the origins of some Marvel heroes stuffed inside. Within days I’d talked my mother into taking me to the local comic store so I could spend my Christmas money and officially start my collecting. “Crisis On Infinite Earths” was just coming to an end, and while I was still years away from realizing exactly what that meant I still found myself in a great position for a new collector. Not only did I have lots of first issues, and great jumping on points, but I also had “Who’s Who” and “Secret Origins” to act as my guides through the DC Universe!*


As a kid, most of what I knew about superheroes I learned from watching cartoons, and as such most of the superheroes I knew were those that appeared on those shows. “Who’s Who” and “Secret Origins” opened up whole new worlds to me! It was actually “Secret Origins” where I first saw the character that inspired me to write this blog, Ted Kord, the Blue Beetle!** I’ve often heard that the first “James Bond” you experience tends to be your favorite. The first actor you see on “Doctor Who” is “your Doctor”. Well, for me, Roger Moore is “Bond”, Peter Davison is the “Doctor”, and from the moment Ted Kord swears to carry on Dan Garrett’s legacy as the Blue Beetle in “Secret Origins” #2…Ted became my “Blue Beetle”.


For the foreseeable future, I plan to update this blog once a week (Saturdays or Sundays) and explore all things Blue Beetle. I’ll be touching on the comics, TV and animation, toys, even the old time radio show, and that means I’ll be discussing Dan Garrett and Jamie Reyes occasionally, but my primary focus will always slant a little more toward good old Ted…MY Blue Beetle! I'm pretty new at this, so bear with me while I learn the ropes and find my grove.
Follow me on Twitter @KordIndustries1
Like me on Facebook at Kord Industries
Email me at kordindustries2013@gmail.com


See you next week!


*Let me say, I love comics and characters from all different publishers, but from the start I have always found myself drawn toward DC more than any other.


**OK, in fairness Rob Kelly and his amazing Aquaman Shrine had something to do with it too
Posted by Unknown at 12:34 PM 1 comment: