What the Kaji Dha? A Charlton Weekly? Almost...

So a while back, I saw this image and thought, "Man that's cool! I'm going to want to share that on the blog...but who did it? What was it for?" 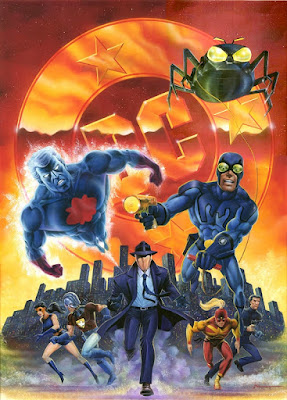 Still later it was identified as a promo piece by fans of the Fire and Water Podcast and attributed to either Pat Broderick or John Higgins (who may have been painting over Broderick's pencils). One fan, Xum Yukinori, even provided a link to this version of the piece... 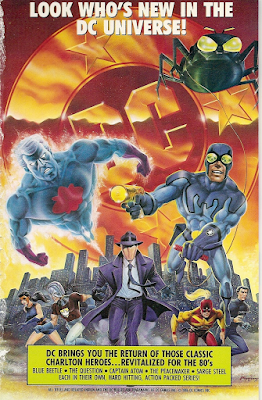 Then Shag Matthews, of Firestorm Fan, suggested I take a look at an issue of "Back Issue" that focused on the Charlton Action Heroes and several things started to align and make sense. DC, or at the very least Dick Giordano, had some big plans for the Charlton heroes leading up to Crisis! Giordano was the driving force behind these heroes when he worked at Charlton, they were, in essence, his children. In 1983, DC's Paul Levitz purchased the rights to the Charlton Action Heroes as a gift for then executive editor Dick Giordano. Giordano then came up with an idea to publish a weekly book spotlighting the Charlton heroes, alternately called "Blockbuster Weekly" and "Comics Cavalcade Weekly" during various stages of pre-production. A sample issue was even completed, with a cover by Dave Gibbons! "Back Issue" included this image, with color and graphics added by Scott Dutton (catspawdynamics.com). 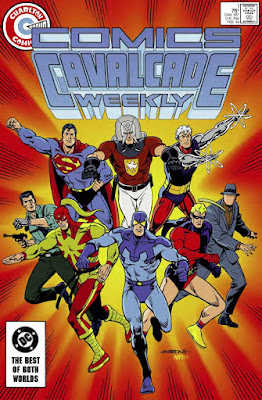 Wondering why Superman is there? Levitz and Giordano also planned to fill out the book with reprints of the newspaper strip "The Worlds Greatest Superheroes" to tie it into the main DCU.

Blue Beetle was to be the lead feature, written by Steve Englehart, with David Ross on pencils and Alex Nino on inks. Creative teams were also assigned to several other characters; Keith Giffen, Robert Loren Fleming and Gary Martin on Peacemaker, Mike W. Barr and Stan Woch on the Question, Giordano and Andy Helfer would co-write Sarge Steel, with Trevor von Eeden handling the art, Peter Cannon: Thunderbolt, Judomaster and Captain Atom were all assigned teams too. When Giordano was pulled onto other projects, Robert Greenberger stepped in to manage the project. Creative teams were tweaked, a dummy issue was completed to show DC's editorial team what was in store post-Crisis and then...nothing.

Let all that sink in for a second...a weekly book, focused on the Charlton Action Heroes...with Blue Beetle as the lead! From the details related in a few articles I found, several stories were written and drawn. Englehart has stated he wrote seven 4 page chapters for Blue Beetle. The original art team of David Ross and Alex Nino were replaced by Chas Truog, who was in turn replaced by Deryl Skelton who apparently completed 6 installments. My math says that's at least 8 Blue Beetle chapters that never saw print.

So, while I'm still not clear if the Broderick/Higgins image was directly tied to the Giordano weekly series, it is clear DC definitely had plans to give the Charlton heroes a much bigger push, much sooner, than they got. As it was nearly all of them showed up eventually, in some capacity. And if this had worked, we may never have gotten that great Len Wein/Paris Cullins Blue Beetle run. Still, it makes my head spin wondering what might have been!