This entry is bittersweet. A finale of sorts...the end of an era. We've reached the end of Dan Garrett's run as Blue Beetle in Charlton Comics. At least writer Roy Thomas, and the art team of Bill Fraccio and Tony Tallarico, bring things full circle by tying things back to Dan's first adventure. Luri Hoshid, his first love interest, returns in a familiar setting in the story "The Eye of Horus"! 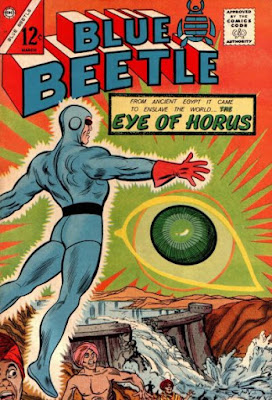 In Egypt, Professor Luri Hoshid and her assistant Hashim are excited by the progress they've made at their latest dig...the tomb of Re-Harakht! The passage still needs to be cleared, but it's just wide enough for Luri to slip in and began exploring. She discovers several hieroglyphics, but the dominant image is a giant Eye of Horus. 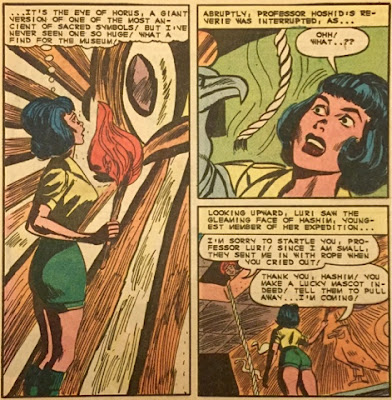 Luri and Hashim head back to the museum to report their findings to Prof. W. Elmo Philipps. Luri suggests calling in Dan Garret to consult, and Philipps agrees...until he's alone. Then his face twists into an evil grin. He plans to re-enter the chamber himself and...well, he's not immediately clear what his intent is, only that world should "beware!" Hashim sees him leave and alerts Luri. When Philipps arrives he descends into the tomb and proceeds to read from a scroll. He plans to unleash the Eye of Horus, have it do his bidding so he can rule the world! Luri and Hashim arrive in time to see the Eye come alive...and Luri immediately remembers she has a scarab necklace given to her by Dan Garrett to summon him if she ever needs Blue Beetle! 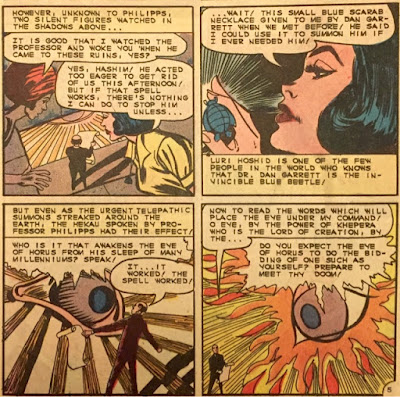 It's a good thing too...because the Eye has no intention of being Philipps slave, and turns on the man who freed it. As the Eye turns it's attention to Luri and Hashim, Blue Beetle bursts on the scene...and recognizing the "bearer of the sacred blue scarab", the Eye vanishes... 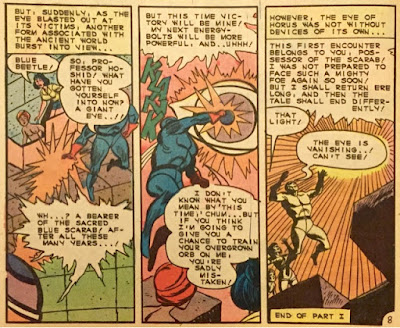 Dan and Luri catch-up and debrief with a trip to a local nightclub, the Purple Mummy. They both feel romance rekindling...until the Eye shows up and starts turning the patrons of the club into bird-headed zombies, slaves to the will of the Eye of Horus. 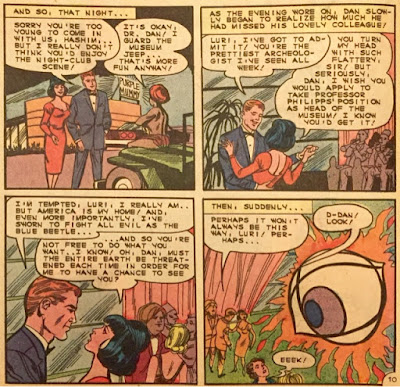 While Dan seems immune, Luri is not and once transformed she hits Dan from behind with a trumpet. The dazed Dan is apparently susceptible to the will of the Eye, and soon finds himself transformed as well.

Luckily for everyone, Hashim who was waiting outside is NOT transformed. He sees Dan drop the scarab, and rushes to pick it up. He hands it back to Dan who is unable to act against the Eye...but he can read the inscription on the scarab. Kaji Dha! Blue Beetle is unleashed, and no longer under the Eye's control...but in the chaos, Hashim is knocked out by a piece of falling debris.

Blue Beetle takes to the sky, determined to put an end to the Eye before it destroys a nearby dam. The Eye speaks as though they've met and fought before, but Dan has no memory of it. He needs to speak to the Pharaoh who gave him the scarab...and no sooner does he think this, than he is transported! The Pharaoh tells him that the first bearer of the scarab fought and defeated the Eye, but that for Dan to do the same he needs to discover the secret of the Eye himself. All Egyptian gods have secret, true, names...Dan needs that name to defeat the Eye but to get it, he must go on a journey. He faces off against creatures of myth, Apep the serpent, Bennu the bird, Amenit, (actually Ammit) part lion, part hippo, part crocodile. 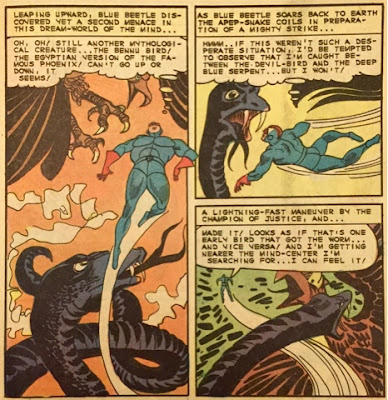 After succeeding in each of the three battles Blue Beetle "knows" the name and what to do. He returns to our world, and calls out the true name, summoning the Eye. Succeeding where Philipps failed Blue Beetle now commands the Eye, and the Eye must obey, so he banishes it to the nether world. 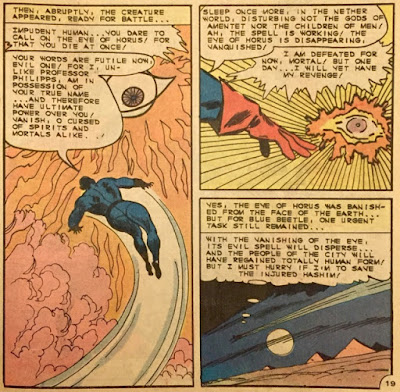 Hashim recovers from his head wound, with an assist from the scarab's power, and promises to keep Dan's identity as Blue Beetle a secret. Luri, no longer bird-headed, tries to persuade Dan to stay, but just like the last time they met...Dan puts his sacred duty first. He's sworn to use the power to fight evil, he can't stay with Luri...but this time he finds himself questioning that decision after the fact... 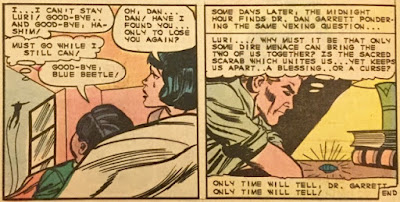 So there you have it...Dan Garrett's final adventure. Well, final solo adventure. I've mentioned before, when I started this blog Dan Garrett was a bit of an enigma to me. He was the version I'd had the least exposure to, and at the start of this entomological exploration I only owned one issue of his adventures. Now I've got them all, and I'm sad to see his story end...I think maybe I'll elaborate on that in a future post.
Posted by Unknown at 12:00 AM