Anywhere I Hang My Head Is Home!

After battling Carapax it's time for Ted Kord to head back home, for some rest and relaxation...well, at least he's heading home. Len Wein, Ross Andru and Danny Bulanadi bring us issue #16, and a story called "Anywhere I Hang My Head Is Home!" 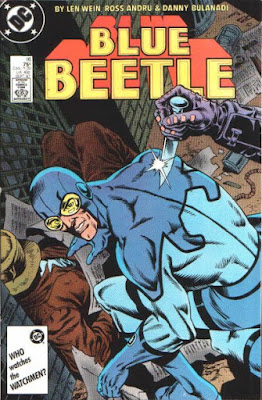 Just as a homeless man, Howard Bower, settles down for the night in a doorway he gets tripped over by a man in a ski mask running down the street. He drops a small red vial, which I imagine is going to be important later! Who's chasing him though? None other than our hero, Blue Beetle! Mr. Ski Mask gets away, but Howard points Blue Beetle in the right direction before deciding he needs to find a new place to sleep. 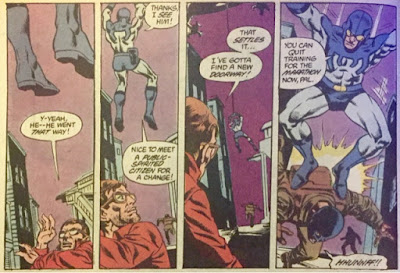 In no time Blue Beetle catches the criminal and wrestles him to the ground, but before he can claim a victory the bandit manages to slip out of hands, run up a couple flights of stairs, and hops on to a conveniently timed elevated train. As Blue Beetle boards the BUG to head back home, Howard gathers his scattered belongings, including the vial, to find a new place to rest for the night.

The next day Lt. Fisher is getting chewed out by his Captain. Seems that while Fisher was on vacation (Pago Island actually) someone has been been on a murder spree. The most recent one, according to the news paper article shown, appears to have taken place at the same doorway Howard Bower was preparing to sleep in! Over at S.T.A.R. labs, Ted Kord is helping his friend Murray Takamoto clear out his old office in preparation for his new job. When Ted suggests Murray could always ask for his S.T.A.R. job back he declines, saying the Lab isn't what it used to be. In fact someone broke in last night and stole an experimental Leukemia cure. BOOM! That gives Ted an idea, and when Murray has to take a call it's time for Blue Beetle to go back into action!

Essie Kravitz sleeps in an alley, next to a dumpster, with a shopping cart full of her belongings close by. She doesn't take to kindly to being woken up by Blue Beetle, and pulls a hat pin on him. He manages to talk her down, and she even recognizes him! 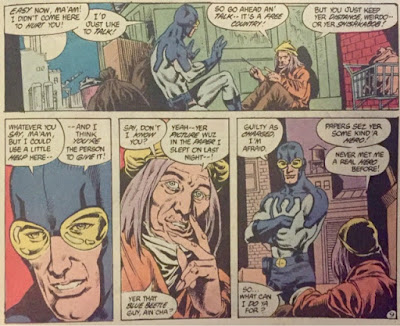 Once they get to chatting she's happy to help. Turns out the man killed wasn't Howard...it was the guy that slept there after Howard left. When Ted leaves though a familiar ski masked figure steps out of the shadows.

Sadly the next day, we find Fisher investigating the death of Essie Kravitz, while Blue Beetle is beating the street looking for anything he can find from the city's homeless. He eventually finds Howard Bower in a shelter. He asks Bower for any info he may have on the man in the ski mask, or the vial, but comes up empty. 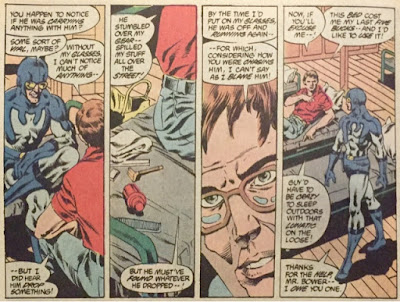 That is until after leaving he suddenly remembers seeing the red vial sitting among Bower's belongings. Meanwhile a man sits and watches a report on the news about "The Skid Row Slasher". Thinking to himself he says they've got it all wrong...he didn't want to kill them, he was just trying to practice "self-preservation". Turns out he's dying of Leukemia and he needs that vial to survive! With that he gears up and heads back out onto the streets, looking for Bower and the vial...and he finds them both!

Entering the shelter the masked man places a knife to Howard Bower's throat and demands the vial. Luckily for Bower, Blue Beetle is on the scene too. 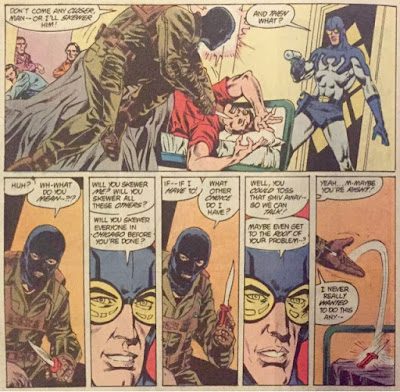 Blue Beetle tries talking him down, and it seems to be working, until Ted pulls the BBGun....then all heck breaks loose! The two trade blows, knocking each other around and eventually out onto the fire escape. Then we find out it's not just Ted that's on the scene, Fisher is outside too. Ted finally manages to get the upper hand and the guys admits what he's done and why. He explains that he felt this was his only way, stealing the serum and killing to get it back, because no one would help him. 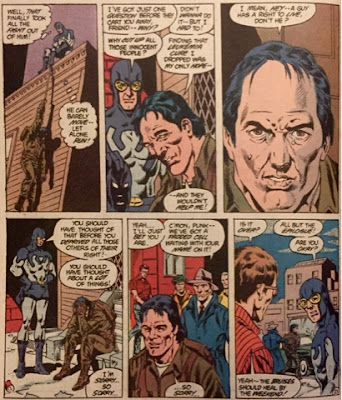 Fisher takes him away, destined for a padded cell, as the homeless folks that have gathered tell Blue Beetle if he ever figures out how to solve the problem of homelessness he knows where to find them.

This was...weird! I get wanting to tell a socially conscious story, I just feel like this particular one came off...well disjointed when it wasn't heavy handed. It was odd and uneven. It jumped from a nice moment between Ted and Essie to her being murdered within the flip of a page. The guy in the ski mask...never got a name. I hate to say it, but this was not a favorite of mine...hopefully next month is different!