Last month, Jaime's friend Brenda was missing after playing with a mysterious box she found in her aunt La Dama's house. Was it a Lament Configuration? Has she been sent to meet Pinhead and the Cenobites? Keith Giffen, John Rogers and Cully Hamner are here to reveal her fate, in issue #10..."Should've Taken That Last Turn at Albuquerque..." 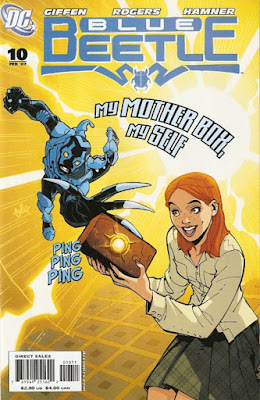 Brenda's aunt, La Dama, is reviewing security footage her niece's disappearance with Jaime, Paco and her own staff. They see Brenda enter the room, pick up the box, then BOOM...she's gone. La Dama is in tears, Brenda has to be ok, and they have to get her back! 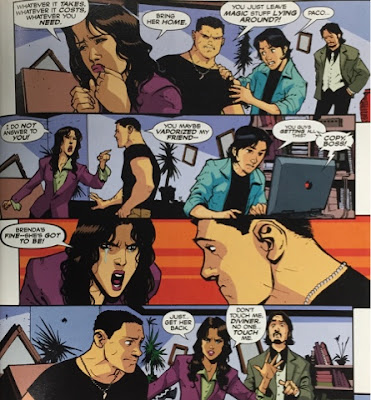 Diviner doesn't detect magic, Nadia and Hector (the hackers that are part of the Beetle Cave crew) find some info on a few conspiracy sites suggesting it's alien tech...a Mother Box from New Genesis! They know what it is, they know where it's from, they even know that it can act as a teleporter. What they still don't know is where it sent Brenda?

Brenda wakes up in a green field, surrounded by lush vegetation, and thinks maybe she's been transported to a private resort for superheroes. That is, until she's surrounded by a group of small aliens that resemble hairless Ewoks. She tries talking to them, but there's a language barrier...luckily we the reader get a translation. 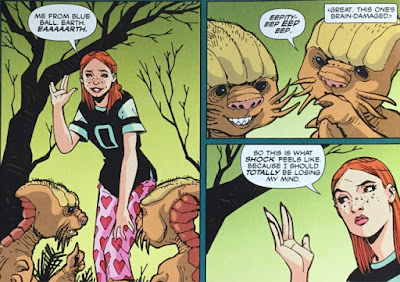 The creatures recognize that she speaks "the cryptic language of the heavens", and think she's "holy and blessed...a miracle".

Back on Earth, Jaime armors up and begins inspecting the Mother Box, as the scarab tries understanding the tech and the language. Apparently the Mother Box has thoughts, and a voice. He hears it screaming...then BOOM! He's transported to a lush green field...with huge guns pointed at him and metallic tentacles shooting up from the ground! 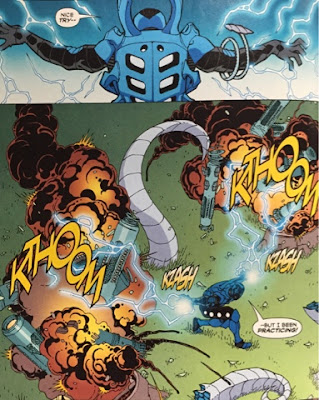 After dispatching the threat, the scarab informs him Brenda is 70 miles away, and they take to the air in search of her. Along the way he spots some kind of armed building, and gets attacked by robot pigeons!

Some of the creatures debate whether or not Brenda is truly a blessing from above as they lead her toward a campsite. Nearby, a barbarian who calls himself "Lonar of the New Gods" spots them. A human girl? The planet is unknown to anyone outside the New Gods, so how did she get here? He wants answers! 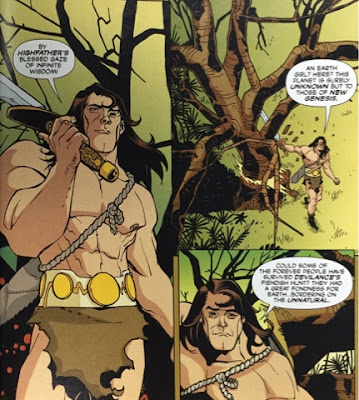 The little creatures take her further along, to a clearing where a statue of a red haired woman stands. One of them declares Brenda their savior...then tells the tribe to drink her blood to make them powerful! Lonar rushes in to help, and the duo manage to fend of the tiny attackers. 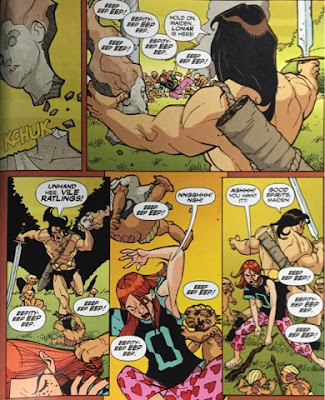 When the dust clears though, Brenda's too freaked out to even trust her hero...until she passes out from a loss of blood. Lonar catches her before she hits the ground...but just in time for Blue Beetle to show up and think the New God is the one responsible for Brenda's injuries! 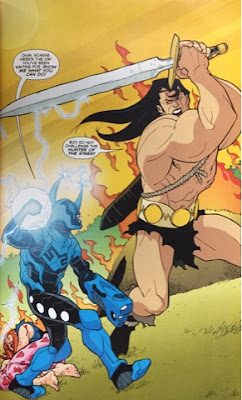 Ok...I have to admit, I'm not a huge fan of the New Gods. Sure Mister Miracle, Big Barda and Darkseid are cool...but the rest? Meh. I've never seen Lonar before this, and all I can think of is comparisons to characters like Conan, He-Man and Blackstar...which isn't exactly a bad thing. Since this is obviously part one of a multi-part story, I figure I may as well put aside any Fourth World/New Gods prejudices and enjoy the ride.