We're at the 3/4 mark of Phantom October and I wanted to take a look at an interesting note in the character's history. Julie Walker, twin sister of the 17th Phantom and, for a brief period of time, a Phantom herself! Created by Lee Falk in 1969, she's had a handful of adventures since. Today, we'll take a look at one of them...from 2010, written by Elizabeth Massie (with input by Rafael Nieves) and art by Paul Daly, here's Moonstone Comics "Julie Walker Is...The Phantom"! 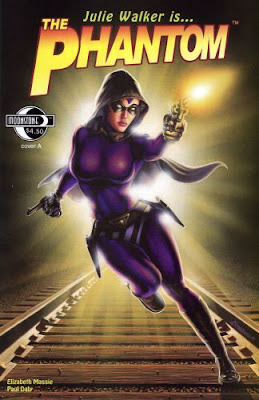 Hoboken, New Jersey, 1889. Kit Walker, his twin sister Julie, and reporter Nellie Bly enjoy breakfast in a local tea room. Nellie is preparing to journey around the world, recreating the fictional adventure of Jules Verne's "Around The World In 80 Days". 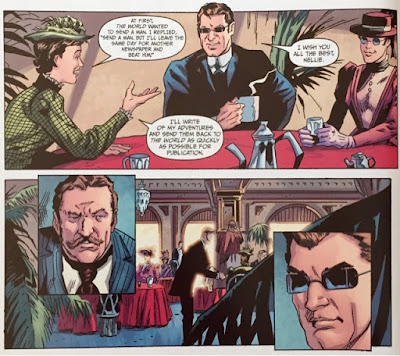 Kit spots some men across the room watching Nellie and decides to investigate. When he sneaks up behind them he learns both men are determined to make Bly's attempt a failure, one even assures the other that she'll meet with an accident and "never make it home!" When he returns to warn her though, Julie and Nellie have already left for the dock, and the start of the reporter's voyage. Kit fills his sister in, and then hires a boat to follow the ship Nellie has set off on. That night he overhears a few members of the crew discuss plans to through her overboard. He takes them on as the Phantom, saving Nellie for the moment, but ends up with a broken leg, a broken wrist, a dislocated shoulder and in a hospital bed for his trouble! 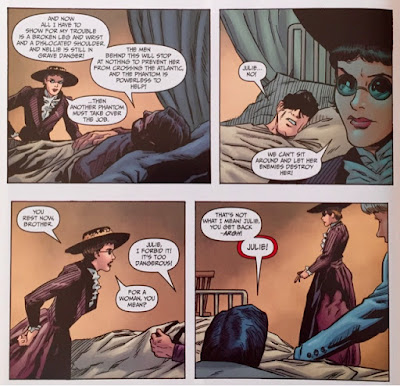 With the Ghost Who Walks out of action, it's now up to Julie to keep Nellie safe! Managing to hire a boat to catch up to Nellie's ship, Julie dons a hooded cloak and keeps an eye on her friend from the shadows. Upon reaching England she's called into action when an assassin pulls a pistol. Tossing off the cloak we see Julie for the first time in the familiar purple tights of the Phantom! 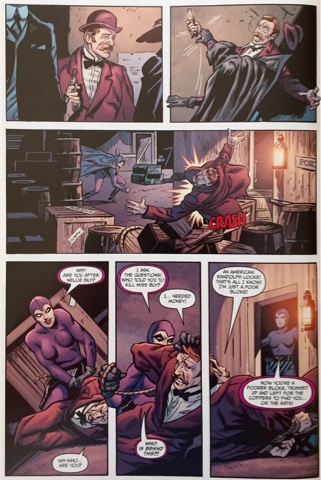 She tackles and quickly disarms the man and learns that he was hired by Randolph Locke...one of the men Kit had seen at the tea house! In France Julie overhears a plot to sabotage Nellie's journey by blowing up train tracks along her route. The men hatching the plan also refer to Locke's involvement. She boards the train, keeping Bly in her sights, but leaps off as they near the location of the attack. Once again donning the costume of the Phantom, Julie "borrows" a horse from a nearby farm and heads off looking for the saboteurs.

In true Phantom style she draws her gun and manages to shoot the flame off the tip of a match just before one of the thugs lights the fuse on a bundle of dynamite! Next she stops a knife throwing assassin in the Middle East...and again, Randolph Locke is responsible. In Singapore she stops an attempt by a boat captain to blow up his own ship, with Bly on board, to collect Locke's bounty and insurance money for the vessel...and for the first time comes face to face with Nellie. 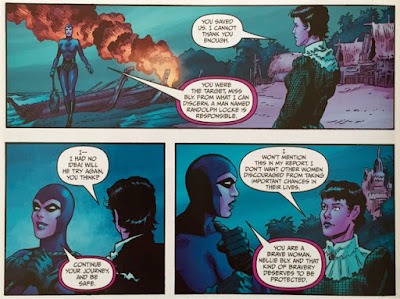 Bly thanks the Female Phantom for saving her, continuing on to the United States to complete her adventure...never aware that the Female Phantom, and her friend Julie are one and the same. Back in the States, Locke makes one last attempt to stop her. As Nellie boards a train, with Julie watching over her from a distance, Locke bribes his way into Nellie's private car. Before he can reach the door though, the Phantom leaps into action again! Quickly disarming him, Locke tries to pay her off, then begs her not to kill him. 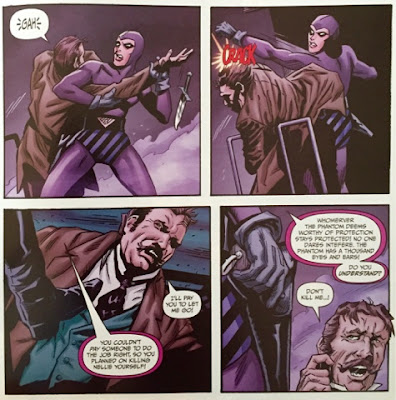 She has no intention of killing him, but she makes it clear that Nellie Bly is forever under the Phantom's protection, and advises him to leave her alone. He agrees...and on the 72nd day of her journey, Nellie Bly returns to New York, safe and sound.

And there you have it...a rare adventure of the Female Phantom, Julie Walker! A nice little work of historical fiction too, following the real life exploits of journalist Nellie Bly and having her friends with, and protected by, the Walkers. Though I do have to say, for being known as an investigative journalist in real life, I'm a little surprised Elizabeth Massie didn't have Nellie attempt to deduce the Female Phantom's identity.