Well, here we are...the 4th and final entry in Phantom October! And it seems especially fitting that last story is "The Last Phantom". Released by Dynamite in 2010, written by Scott Beatty with art by Eduardo Ferigato, the story sees Kit Walker (who's given up being the Phantom to run a charity organization) drawn back into the hero biz.

Kit Walker has given up being the Phantom, though he is still the protector of Bengali. With his charity organization, the Walkabout Foundation, he travels the world raising money for and bringing awareness to the small nation and it's people. Tonight, it's a dinner event in New York accompanied by his personal assistant Lee, his business partner Peter Quisling, and Michael Mgebe, the Prime Minister of Bengali. 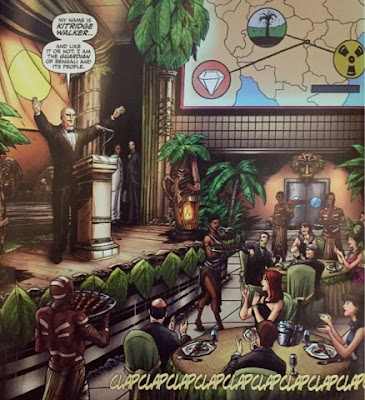 During the even Quisling excuses himself when he receives a mysterious text message, "krieghund". Meanwhile, back home Kit's wife and son begin their day on the Long Walk Farm, preparing a visit to a nearby village to check on children and distribute vaccinations. As they hop into their jeep though, they're watched by a sniper in the distance. 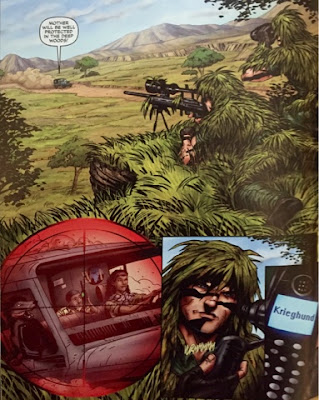 If that wasn't bad enough, in New York, one of the mechanics prepping Walker's plane for his flight home plants a bomb near the engine. Kit and Quisling discuss the evening's success as the former Phantom prepares to board. He's so happy with the turnout, and so eager to get home, he nearly forgets his attache case. Luckily Lee delivers it just before the doors to the plane are closed. Unluckily, right after those doors close, the mechanic that planted the bomb strangles Lee from behind, while Quisling receives another text "Cry Havoc". Back in Bengali, teams of mercenary soldiers storm Walkers home killing everyone in sight. Hero, the Phantom's horse, manages to escape, running into the jungle. As Kit's wife and son try to run mercs in stealth suits sweep in and take them down. 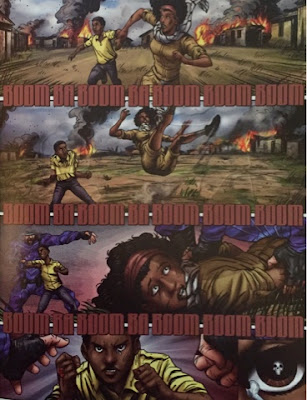 While all of this is going on, Quisling wonders why they aren't all dead yet. Quisling, Walker's business partner, has been behind this. At that moment, the bomb on the plane detonates over the jungles of Bengali. Kit and the Prime Minster manage to survive, crawling from the wreckage while Quisling holds a press conference in the States announcing their presumed deaths. 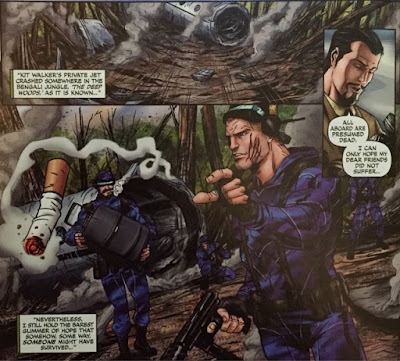 Simultaneously Kit discovers the bodies of his murdered wife and child...and the Ghost rises. 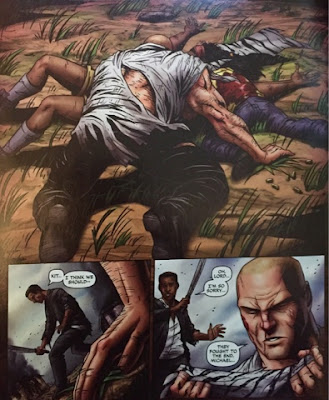 Fully realizing he can't turn his back on the legacy, he opens his attache case, revealing the belt and holsters, the guns and rings of a hero. Using his wife's scarf as a loincloth, he masks his eyes in ash, and covers his body in the blood of his loved ones, and emerges as...the Phantom! And no sooner than he reclaims the title, he finds himself pressed into action...surrounded by a squad of stealth suited soldiers! 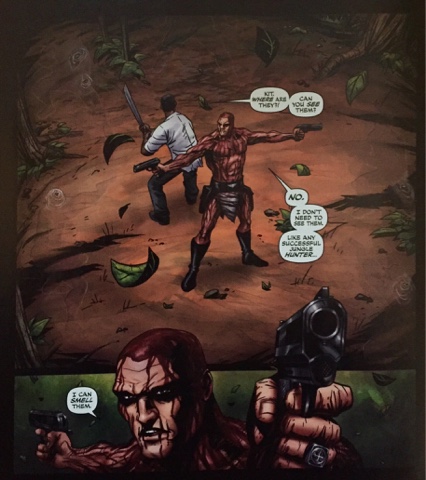 WOW! That is a gut punch of a story! From Kit giving up on the Legacy, to the devastating reason he has to return. This was an emotional rollercoaster from beginning to end. It's not your father's Phantom...then again, it's still closer than that SyFy Channel movie/backdoor pilot. What did you think?

And there you have it. I wanted to spend October jumping thru the comic book history of Lee Falk's classic hero, the Phantom! From Gold Key to DC, Moonstone to Dynamite...and I did, but there's still so much more! Dell, King, Charlton, Marvel, and Wolf are all publishers who have not only covered the adventures of the Ghost Who Walks...but whose books I have in my collection. So here's my current plan. Starting in January I'll be covering a random adventure of the Ghost Who Walks each month...on a new Blogger page all its own! THere will be some changes to the way I cover Blue Beetle too...but that's a tale better told when I return to the Kord Industries banner. Be sure to check back next week!
Posted by Unknown at 12:00 AM