Where last weeks "The Phantom" #01 from Gold Key jumped right into the thick of things, this weeks adventure from DC Comics' 4-part 1988 mini-series, written by Peter David, with art by Joe Orlando and Dennis Janke, gives a little hint at the origin and history of the Ghost Who Walks...and unfolds across two different eras; those of the 13th and 21st Phantoms! 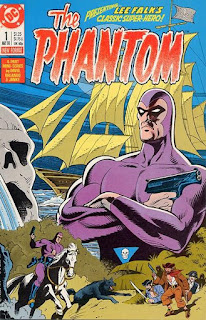 Deep in the jungle of Bangalla, inside the Skull Cave, a figure sits at a desk writing in a journal by candlelight. He writes about duty, and fear, and wonders if "The First" felt like this too. 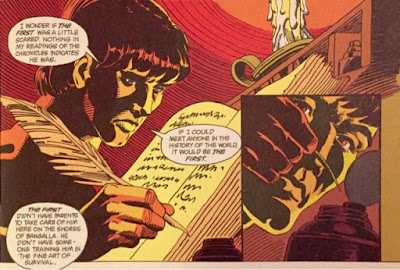 From there we jump to a recap of the Phantom's origin. A boat overrun by pirates. A father, desperately throwing his son overboard to protect him from their attackers. The boy waking on a beach, face to face with a native tribe. The Bandar, a tribe of pygmies, take him in. Then...he finds a body. His father? No...a pirate in his father's clothes. And it is then that the First swore his oath...to dedicate his life to destroy piracy, cruelty and injustice. 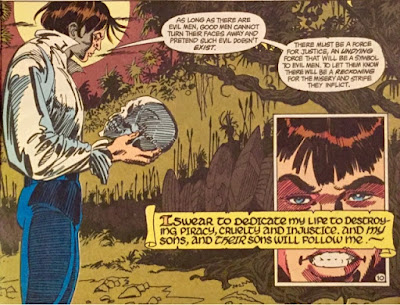 The 14th Phantom, the man writing in the journal then spills ink which, by chance or by fate, forms a skull which he follows with a brief apology to future generations reading his words. At that moment, a voice calls "Uncle Walker, the Bandar said to come quickly" and the 21st Phantom (who's been reading the words of the 14th) responds. 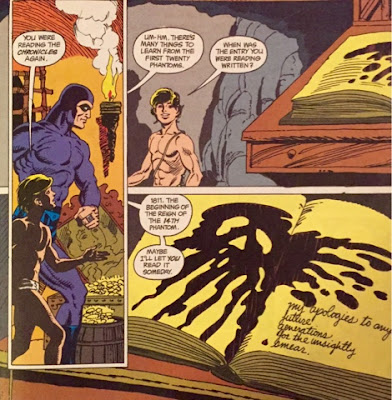 As the 21st leaves to be briefed by his friend and ally, Guran, his nephew Rex stays behind to continue reading as the 14th, relates a tale of his father, the 13th Phantom. Meanwhile the 21st heads off on his horse Hero, with his wolf Devil at his side. It seems that several members of the Jungle Patrol have gone missing after investigating reports of drug runners in the area. One of the patrolmen, Lt. Barrows, once saved the life of the Phantom. For his bravery, the Phantom marked him with the "good mark" leaving Barrows under his protection. Sadly, the drug runners see the mark and decide to make an example of the patrolman just before the 21st arrives on the scene. 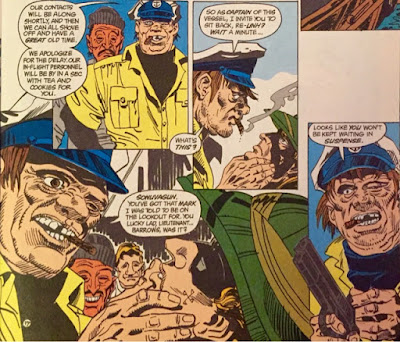 At the same time Rex is reading of how the 13th Phantom, upon hearing the screams of a woman, boarded a pirate ship intent on saving her. Once on board though, he learns that the woman was part of the plan. Her screams were fake, intended to lure him in. And then the pirates attack! Surrounded and outnumbered, the 13th was captured and chained by marauders known as the Chessmen brothers. 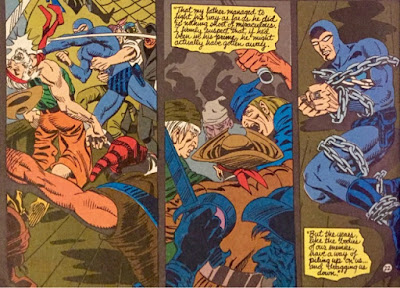 And even though jungle lore says "to see the Phantom's unmasked face is to die", that's just what the villains plan to do! Back in the present, the 21st boards the drug runners boat and finds Barrows dead, and the other patrolman tied up. When he asks who is responsible the chilling reply ties the two stories together! 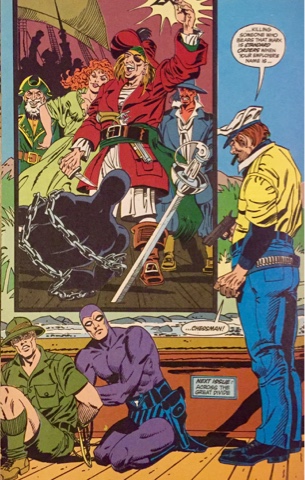 This is only part one of a four part story, but wow was there a lot of excitement packed in this issue! Three Phantoms (well, technically two, the 13th and 21st, and one to be, the 14th), pirates, drug runners, the origin story...a lot going on, but it never overwhelmed me as the reader. The art was solid, and while I'm not 100% sure it was intentional, the use of color was clever. In a story where multiple Phantom's appear it could get difficult to tell them apart, luckily the coloring gives a clue. The 13th's costume is a shade closer to blue, while the 21st is the more familiar purple.