By now everyone's probably heard that TNT and Warner Brothers are looking to bring DC's Titans to the small screen! Geoff Johns has already indicated it would not necessarily be a "teen" team of Titans, and confirmed that Nightwing, Raven and Starfire were involved...the rest of the team is a mystery at this point. 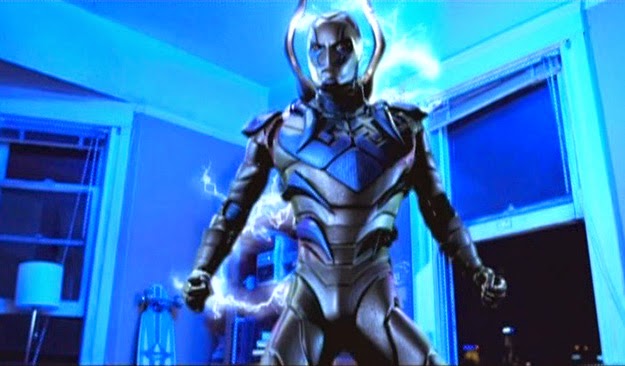 Over CBR thought they're offering some speculation on possible members...and one of them is none other than Blue Beetle!


"Warner Bros. has been looking for a place for Jaime Reyes' Blue Beetle for years. He appeared on "Smallville" and was a major part of the later seasons of "Young Justice," and a short, live-action transformation reel wowed the Comic-Con circuit a few years back. Reyes is another legacy hero, of sorts, and would bring some much needed ethnic diversity to the cast."
They make a good point, and it it doesn't stop there (check out the rest of the article, not just for Jaime, but for their other picks).
It does bring me to a question though...it seems Roy "Speedy/Red Arrow" Harper and Wally "Kid Flash/Flash" West are off the table due to their involvement (or potential involvement in Wally's case) with Arrow and Flash. So...with Ted Kord being teased several times in Arrow, but Atom getting an appearance instead because there were other plans for the character...could Ted, not Jaime, be the Blue Beetle we'll see next? If so, where? Arrow? Titans? His own show? Justice League?
Keep your fingers crossed Beetlemaniacs!
Posted by Unknown at 2:20 PM