Adventures In The DC Universe #8

I love DC's various animated series..."Batman", "Superman", "Justice League Unlimited"...they were brilliant! Solid writing, simple yet iconic character designs...and more heroes, villains and supporting characters than you could shake a stick at! If I had one complaint though...it was that Blue Beetle never appeared. Luckily, Steve Vance (script), John Delaney (pencils) and Ron Boyd (inks) gave us a little taste of what could have been with "Adventures In The DC Universe" #8! 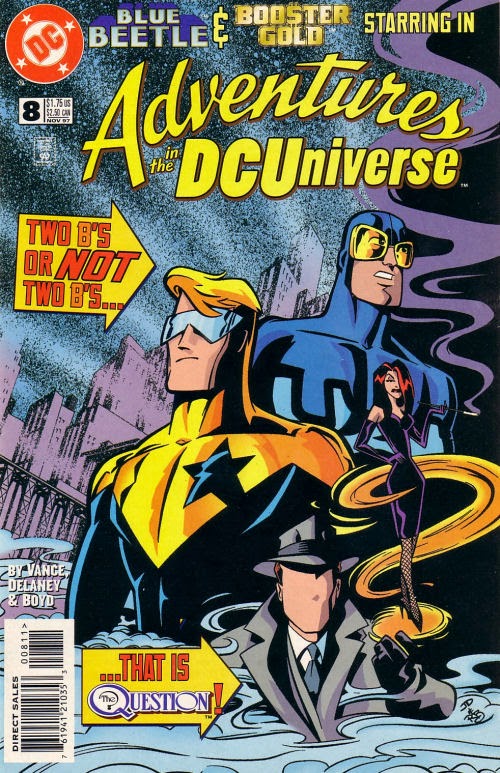 The BUG has crashed, and Blue Beetle and Booster Gold are left, upside down, arguing about who's fault it was. 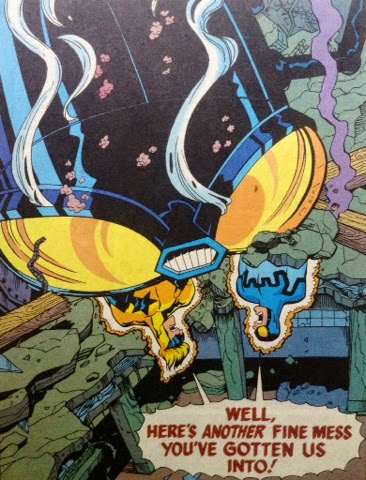 Queue flashback! Beetle says it all started when his butler interrupted breakfast to bring Booster in. Booster had gotten himself in trouble and needed Ted's help. Booster says that's not it all, and relates how he came to Ted's apartment with a plan to make the team of Blue & Gold a little extra money! A zillionaire's research sub sank, and he needs someone (who's not afraid of the toxic nightmare that is the river it sank in) to bring it up. Booster's pretty confident that between his force field and the BUG, they'll be ok...probably. Booster also told their client that if needed they'd call Superman, a "junior associate" of Blue & Gold. 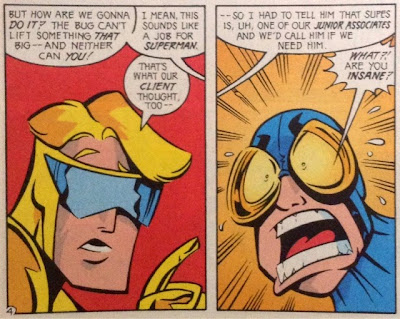 Ted starts to second guess things until Booster shows him how much they could earn! Before reaching their destination though, they spot a damsel in distress. "Blue Beetle to the rescue!" Ted shouts, leaving Booster behind and swinging into action.

The poor girl is being chased, for no apparent reason, by some armored thugs and is grateful for the help of "the Turquoise Tarantula". Ted, a little miffed, corrects her and whisks her up to the safety of the BUG. The thugs bring the fight to the air, so Beetle (not wanting to let Booster get all the glory) puts the ship on autopilot and swings outside on his sky-wire to join the battle...which is just what the "damsel" wanted apparently. 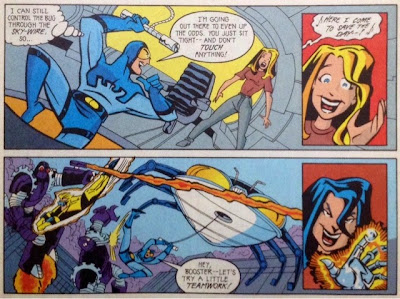 She reveals a cybernetic hand that interfaces with the BUG's computer and in no time at all...crashes the BUG! She makes reference to a previous, failed, encounter with the League and says she figured she'd smart smaller this time. She sends her thugs in for the kill, but Blue Beetle manages to get back in control of the BUG just in time to send it crashing down on top of the villains. With the femme fatale having gotten away, the boys decide to get back on track for the salvage job...except it's already done...all that's left is the clean-up!

This was a fun, fast paced adventure that makes me even more disappointed we never got to see good ol' Ted on the animated "Justice League Unlimited.

See you next week!
Posted by Unknown at 3:00 AM