"Christmas With The Beetles"

It's week 3 of my holiday comic blogs...and time to visit with an old friend...Blue Beetle! This is a blog about him after all...you didn't think I'd forgotten did you? 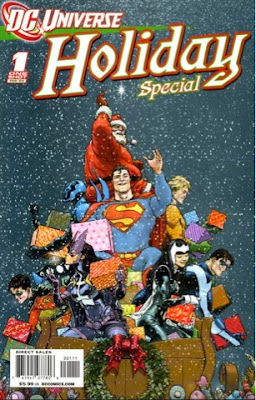 Cover dated February 2009, but in stores December 2008, we got the "DC Universe Holiday Special"...and with J.C. Vaughn writing, Lee Garbett on pencils and Trevor Scott on inks, we got "Christmas With The Beetles". Yup, you read that right. Beetles, plural. Dan Garrett, Ted Kord, and Jaime Reyes all appear!

We open with the Cole family, Donnie (many years ago), Lonnie (not quite as many years ago) and Louie (just a few months ago), each up to no good waiving crowbars, knives and guns around. At the same time someone named Richard is visiting Sanchez State Jail in El Paso, Texas. A quick cut back to the Coles, and we see each one getting decked by a costumed hero, Blue Beetles Garrett, Kord and Reyes!

Richard sits across a table from a man in an orange prison jumpsuit. "So I suppose there's a good reason you wanted me to drag myself down here on Christmas Eve?" Followed by flashbacks to each of the Boys in Blue, and an explanation. Louie explains to his son, Richard, that he knows he hasn't been a good father, he knows he's messed ups few Christmases. His grandfather, Donnie, fought the first BB, his dad Lonnie fought the second. Richard adds that Louie fought the new one, and lost. Louie points out the irony that he had moved his family across the country* to avoid the Blue Beetle and still got taken down. 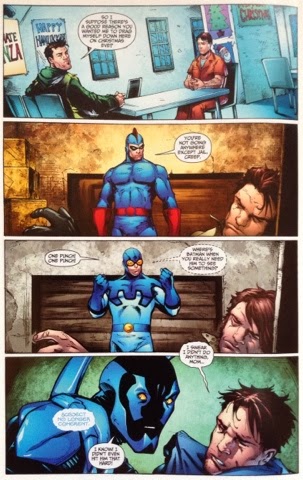 Richard, or should I say "Dick", laments that he comes from a family of losers. Louie agrees, but says it doesn't have to be that way for his son. He has something for him for Christmas. "You're going to start being a good dad now? From prison?" Louie says he's going to try. He says he knows his son is hanging with a gang that's planning a big job. He wants his son to walk away from that life, before he gets involved in what they're planning...while his record is still clean, while he still has a chance. As Richard leaves, he phones his mother. "Ma? Yeah, it's me. I saw dad. It was actually a good visit..." And then we see that Jaime has been watching... 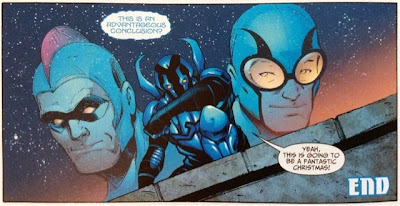 So, while maybe not the longest, or best story in this "DC Universe Holiday Special" it certainly has some spirit. I look at it kind of like "A Christmas Carol"...a story or redemption and second chances for both Louie and Richard. And speaking of "A Christmas Carol", I'll see back here next week!

*Dan Garrett operated out of Hub City (according to Denny O'Neill, East St Louis, Illinois) and Ted Kord was from Chicago, Illinois...Jaime is from Texas, where Louie moved to get away from the others...talk about bad luck!