A doctor, a priest and a demon meet in an old mansion on Christmas Eve...no, not the set up to a joke...it's the first of 4 comics I want to talk a little about this holiday season! That's right, as my gift to you...or lump of coal depending on your perspective...I'll be reviewing one holiday comic a week for the next 4 weeks. To quote an old Father Guido Sarducci bit, "I hope you enjoy it, as much as I enjoy doin' it to you!"

When you think Christmas comics Hellboy is probably not the first character to come to mind. That said, in 1997 creator Mike Mignola and publisher Dark Horse Comics brought us the "Hellboy Christmas Special"...and it was pretty cool! 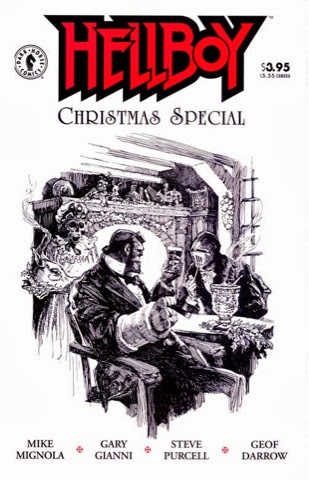 Hellboy shows up at an English manor on Christmas Eve and is told by a doctor that the lady of the house, Mrs. Hatch, sadly, won't make it through the night. Big Red sends the doc on his way and consults with the family priest. The priest explains that Mrs. Hatch moved here with her husband, brother, and her three children...and Mrs. Hatch is the last one left. The others began wasting away after Annie, the favorite daughter, disappeared five years ago while strolling alone through an old cemetery after midnight.

Hellboy excuses himself and visits Mrs. Hatch in her room. She knows she's dying, and asks for a favor. She wants Hellboy to deliver a small gift to her missing daughter...who has been visiting her late at night! Before he leaves though, the old woman says she recognizes Big Red...one of two moments that really get me in this story..."You're Father Christmas." 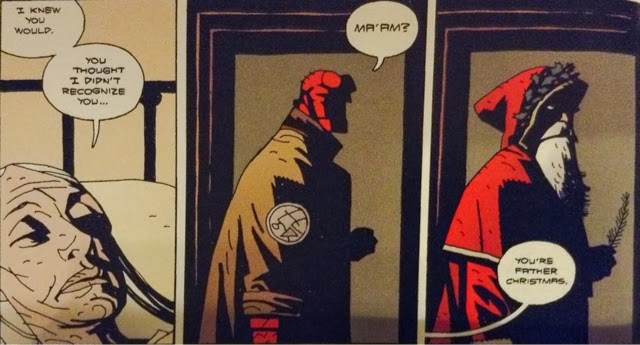 After giving the priest some directions on what to do if he doesn't return, Hellboy heads off into the old cemetery. He soon finds an open crypt with a long winding path that leads underground...and to Annie Hatch, the missing daughter. Annie tells of how she followed a silver eyed mouse down a hole where "the second son of a king" offered her all her heart's desires if she stayed. She also says that afterward, she would visit her family at night until they came to live underground too...in fact, they're gathering for dinner now. Hellboy tells Annie that it's Christmas Eve, which seems to surprise her, and that he has a gift from her mother. A crucifix! And then, things get crazy! The family turn into monsters, ghouls, that descend on Big Red who drops them with his big right hand. The dark prince steps from the shadows and begins trading blows with Hellboy, while back at the manor, the priest begins performing last rites for Mrs. Hatch. And as the church bells toll for midnight mass, Annie and her mother are reunited, and the monster is defeated. This brings to the end, and the second moment. The priest says, "Poor woman." And Hellboy replies, "Yeah, she was a nice old lady...she saved her little girl, and she thought I was Santa Claus." These Hellboy as Santa moments are oddly touching to me, and make this a great holiday horror story! 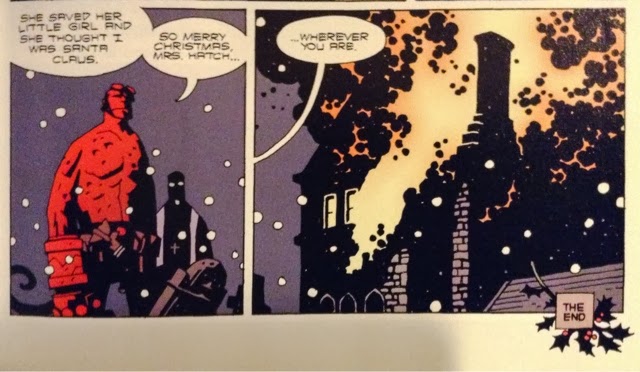