Don't Get Mad, Get Even!

This is it Beetlemaniacs, the penultimate issue of the 1986 run! Only one issue to go after this! Len Wein, Don Heck and Danny Bulanadi are here for issue #23, and we even get two returning rogues as part of the big send off! Sit back and enjoy "Don't Get Mad, Get Even!" 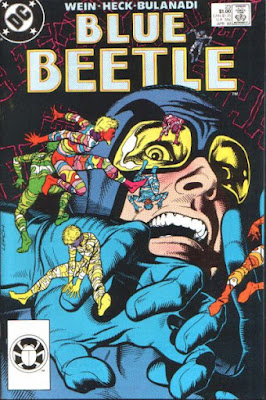 At an unnamed, privately funded research facility, Blue Beetle arrives on the scene to stop the malevolent Madmen from...doing something. Stealing? Sabotaging? It's unclear, but if the Madmen are involved it can't be good right? 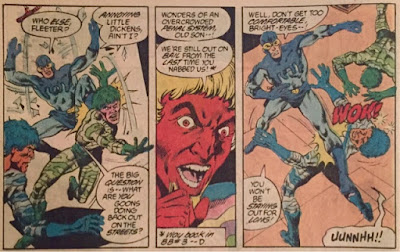 Ted charges in tossing the colorful criminals left and right until he focus on their leader, Fleeter! In the scuffle Fleeter scratches Ted like a schoolgirl, before his Madmen henchmen sneak up on our hero. 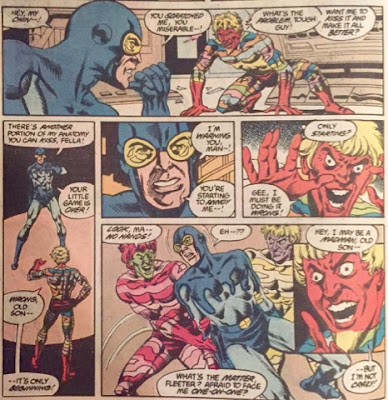 Its a short lived victory though, as Blue Beetle fights back leaving all the maniacal Madmen sprawling on the floor. And it's at that moment that Chicago's finest arrive and look to arrest them all...Blue Beetle included! 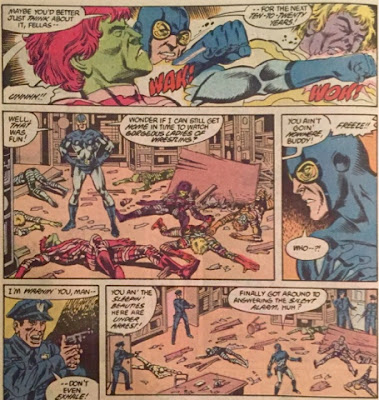 Luckily Lt. Fisher shows up to cut Ted loose, but reminds him they have some unfinished business to attend to following the events of Millennium. Before the cops haul the Madmen away though, Fleeter swears its not the end, "You haven't seen the last of us, Beetle!"

Ted heads back to Kord Inc, where he runs into his girlfriend Melody, and a pile of work on his desk. After trading a few insults, about her being surprised to see him at work and him being surprised to see her at all after she cancelled their last few dates, something strange happens. Ted looks at Melody...but sees her transformed into a Madwoman! 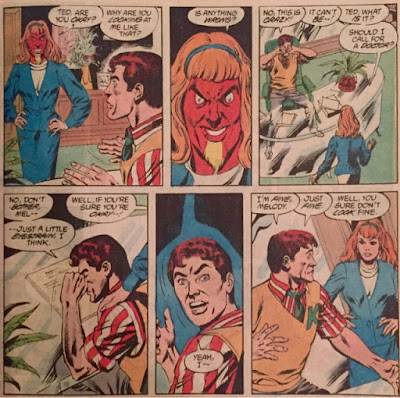 She asks if he's ok, he chalks it up to being overworked, lol, and slips out as quickly as he'd come in.

Meanwhile, at the St. Lawrence Seaway, something, or someone, is causing a disturbance. The staff and security at the seaway's locks, think it's an earthquake...but it's actually Carapax! The security guards try shooting him, but the bullets have no effect as the mechanical man smashes through the lock!

Trying to get some fresh air to clear his head, Ted walks the streets of Chicago. It's a great plan until a man taps him on the shoulder for directions...and that man is a Madman! Well, for a moment, then he returns to normal. At a busy intersection, EVERYONE appears to be Madmen! When he tries to stop a woman to ask her why, she screams for the cops thinking Ted is some kind of pervert. 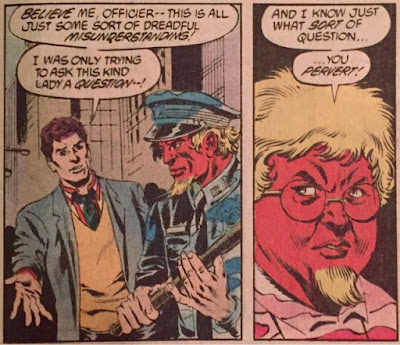 The Madman cop, lets Ted go asking that he make sure it doesn't happen again. Confused, all Ted can think about is the scratch from the fight with Fleeter. That's the answer to the mystery, and he rushes to talk to Lt. Fisher. At Fisher's office Ted agrees to to help the detective, if he helps Blue Beetle first. Before you know it, we're inside Fleeter's jail cell. A blue gloved hand reaches out of the shadows, pinching Fleeter's nose. 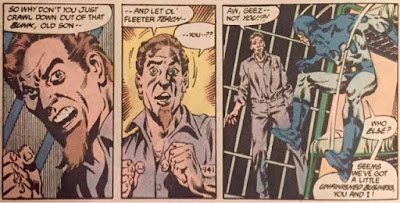 The two tangle briefly in the confines of the cell until Beetle scratches Fleeter with the same poisoned pin he found in Fleeter's glove (thanks to Fisher letting him inspect the criminal's belongings). Fleeter calls for the guards...but when they arrive...they're all Madmen too! Not wanting to face the same fate as Ted, Fleeter gives up the location of an antidote...only to discover that the guards were simply wearing wigs and make-up...and he's just confessed his involvement in front of a room full of police officers!

That would have been a nice ending if the story stopped there...but we get one more twist. A man walks into Kord Inc, brushing past Angela's reception desk. When Angela protests, saying he can't barge in, he tells her that yes in fact he can and that he's here to see Melody. And when Ted returns to the office he's shocked to find the man sitting at his desk. The man? Ted's father! 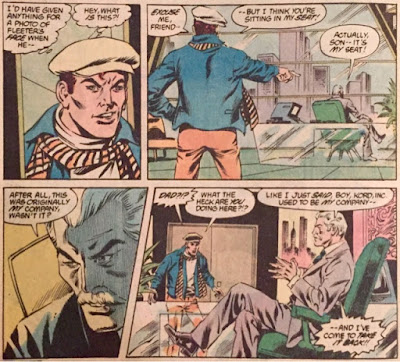 Well crap! That was a fantastic issue! I miss Paris Cullins' art, which I bet would have looked great here in the rematch with the Madmen (who we haven't seen since issue #3!), but Don Heck does good job of keeping things going. The Madmen, the return of Carapax, the return of Ted's dad?! Len Wein packed a lot into the story here and it was amazing! Twists, turns, surprises...it actually makes it kind of sad knowing that the next issue is the end...for now anyway...
Posted by Unknown at 12:00 AM