...And Death Shall Have No Dominion!

Last time Ted sparred with a jai alai inspired villain named Overthrow. If that wasn't strange enough, Dan Garrett was resurrected from the dead and looking to bring down the man who stole the name Blue Beetle! Len Wein and Paris Cullins pick up where things left off with issue #18, and a story called "...And Death Shall Have No Dominion!" 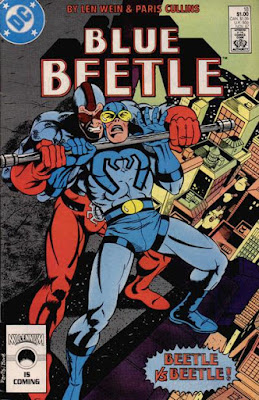 Dan Garrett is pissed! Someone stole his name and he's ripping up Chicago trying to find the little bug who did it! Ted Kord is in his apartment, looking down at the chaos caused by the "impostor" in Dan's costume. Only one thing he can do...get out there and take him down before anyone gets hurt. The only problem? It looks like Ted's the one who's going to get hurt as Dan tosses cars, pieces of sidewalk and street, and energy blasts at our hero! 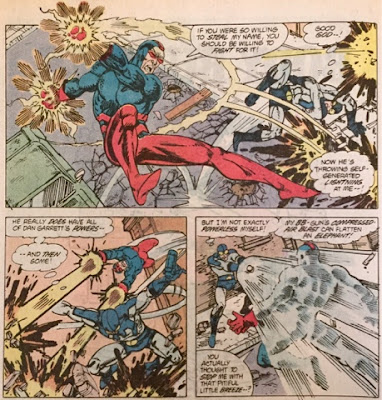 At Kord Omniversal, Melody Case tries to ask Randall Truman about where he was during the Overthrow attack...but he ducks out on her faster than she can blink. At S.T.A.R. Labs, Mr. Slate is desperate to find "File 13" and whoever was responsible for activating it. When Slate storms out of the room, a few of his scientists are relieved he hasn't found out about File 13-B yet! Slate's looking in the wrong places though, out on the streets of Chicago File 13, a young blond haired boy, is watching the fight between Blue Beetle...and Blue Beetle!

Dan has Ted down. Looming over him the elder Beetle raises a large piece of concrete ready to smash his protege...but he holds back. The Pharaoh demands to know why? Demands that Dan finish the job, and destroy Ted! 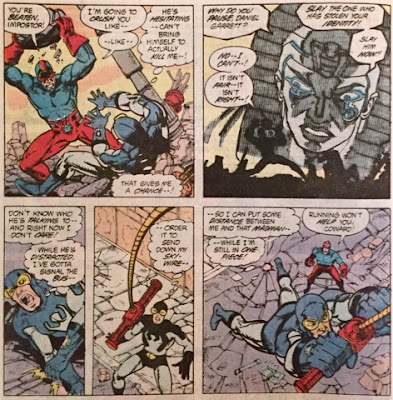 It's enough of an opening for Ted to summon the BUG via remote and make a brief getaway. The longer they fight, the more he realizes this really may be Dan, even if he doesn't understand how he's returned or why he's trying to kill him. In no time Dan is back on the warpath! In fact Dan finally pushes Ted too far...by shattering the BUG's viewport "eye". Now Ted's ready to fight!

He boxes Dan's ears, throws punches, and even tries dumping a high rise's  water tower over his former mentor. When Dan uses the scarab to focus his energy to disperse the water though, Ted see's an opening. If he can get the scarab away from Dan he can end the fight!

Using a clothesline to perform some work tricks worthy of a rodeo star, Ted manages to get the scarab out of Dan's hand. 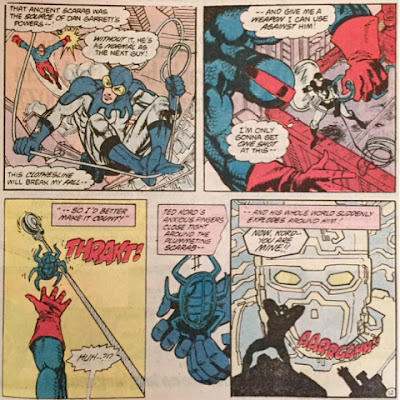 Once it's in Ted's hand though the Pharaoh tries to take control. The being offers Ted the power of the scarab, all the power Dan had and more! It wants Ted more than Dan. Dan is old and weak, Ted is young, strong.

Ted is tempted...then resists...then gets jumped from behind by a jealous Dan. They tumble into the streets, tossing each other to and fro, until Lt. Fisher and the Chicago Police Department appear on the scene. When Dan refuses to stand down, the police open fire...and don't do anything more than piss him off. With Dan distracted Ted tries again to subdue his mentor with the BBgun, but fails. Dan grabs Ted, ready to strangle the life out of him...until File 13 steps out of the shadows and orders him to stop. 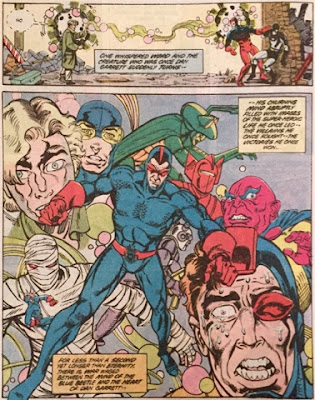 His life flashes before his eyes and he comes to a realization...as heroic as his deeds were, he was nothing more than a pawn of the Pharaoh and the scarab. They weren't what they seemed either...the scarab reveals itself to be something otherworldly, a tentacled creature that's not willing to let Dan, or Ted, go.

And so, with one last act of heroism Dan sacrifices himself to destroy it! 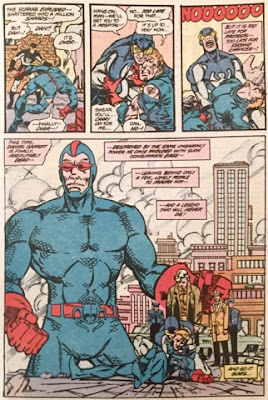 HOLY CRAP! That was an emotional rollercoaster! It wasn't that long ago we looked at the final Charlton adventure of Dan Garrett. It was sad. Over the last few years working on this blog I was able to get to know Dan Garrett, the 2nd Blue Beetle, and appreciate the character and adventures...and then they were gone. This arc brought him back, turned him evil, and saw him redeemed only to have him sacrifice himself to protect Ted from the being in the scarab. WOW! This may be my favorite issue of the entire series!
Posted by Unknown at 12:00 AM