Last issue, Jaime went spelunking with Peacemaker and found a scarab-like drone burrowing in the caves. Not only that, the scarab's manufacturers, the Reach, showed up to introduce themselves and say hello! John Rogers and Rafael Albuquerque are back, with some help from David Baldeon and Dan Davis to guide us through issue #13 in a story called "Defective". 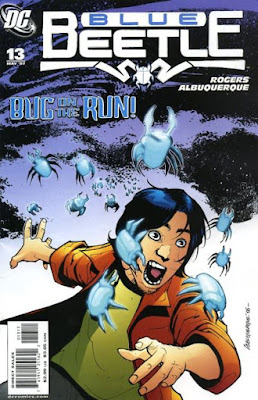 Jaime kicks things off with with a quick recap of the first 12 issues, before picking up where last issue left off with the emissary of the Reach speaking to him and Peacemaker. The being explains that Jaime's scarab is damaged. In fact it appears to have been corrupted, activated for Dan Garrett earlier than intended with the help of magic. He assures Jaime that he'll make sure it gets fixed. He even offers to help Peacemaker purge the info, the "owners manual", he has embedded in his mind. Peacemaker is a little suspicious (isn't he always?) and questions why the Reach created the scarab in the first place. "To save Earth" is the reply they get before the Reach representative leaves, asking that they not reveal his presence just yet.

Back on the Reach ship the truth quickly begins to unfold. They're scanning the planet, monitoring meta human activity...but right now, their biggest problem is Blue Beetle! One larger, more menacing figure suggests they just kill Jaime, but the emissary from earlier suggests that would just bring down all the meta humans on them. Instead, for now, they'll test Blue Beetle, collect some data.

While helping Jaime's dad get ready to reopen his auto repair shop, Jaime and Paco discuss the Reach. Are they legit? Can they be trusted? Right now, Jaime doesn't think he has a choice but to believe them. That night, Jaime's mother says she wants to meet the aliens. Jaime's a little hesitant, feels a little awkward...until piercing feedback drops him to his knees. A call from Nadia and Hector, and a news report, about a riot in nearby Juarez...involving people with laser weapons, sends Jaime into action. As Blue Beetle he arrives on the scene to find it's not people with laser weapons...they're scarab infected, partially armored. Oddly, he's the only one that can see it...at least until Peacemaker arrives. 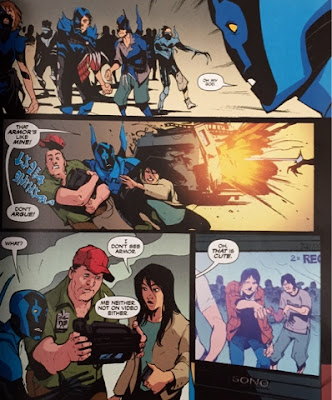 News crews are on the scene and capture video of Blue Beetle taking out the mob...non-lethally. He disables the infected mob, all the while protecting innocent lives and even manages to save a pregnant woman trapped in a building. The Reach are shocked! How can he control the scarab? How can he override their programming? 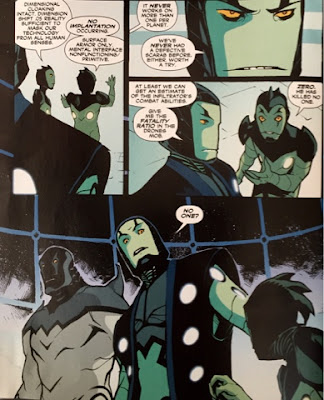 Even worse (for the Reach anyway) Jaime manages to use his scarab to speak to the scarabs attached to the mob. Just as he's about to convince the other scarabs to refuse their orders too, the Reach recall them. 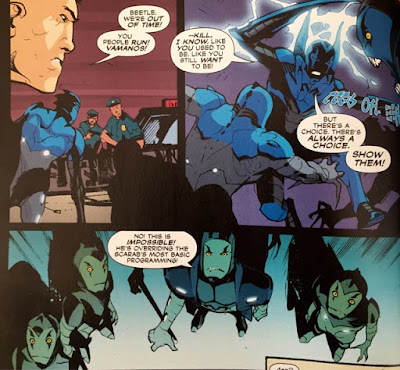 Blue Beetle is branded a hero, while the Reach warn him their not done just yet. And they're not...they soon appear on TV initiating contact with the US Government. As Jaime and his family watch the events unfold...a previously unseen scarab glows under Peacemaker's shirt.

So, thanks to "Young Justice" I already saw the Reach as villains, and didn't trust them. That said...I'm disappointed the reveal came so quickly! Sure the government thinks they're peaceful aliens, here to help mankind...but the fact the Blue Beetle already knows they're not the answer he was hoping for, well I'd hoped for more. We'll see how it plays out I guess. Oh, and just last month I said I loved the relationship between Blue Beetle and Peacemaker, and now seeds are planted to screw that up?! Say it ain't so nearly 10yr old comic book, say it ain't so!