"Man In The Middle"

Last issue, Ted's friend and employee Curt Calhoun got doused with molten promethium, Blue Beetle ran into a semi-reluctant team of super-villains led by former Doom Patrol member Mento...and then the Teen Titans showed up. And that's just the big stuff...there was a LOT going on! So what happens next? Len Wein, and the art team of Paris Cullins and Del Barras are about to reveal all with "Blue Beetle" #12, in a story called, "Man in the Middle"! 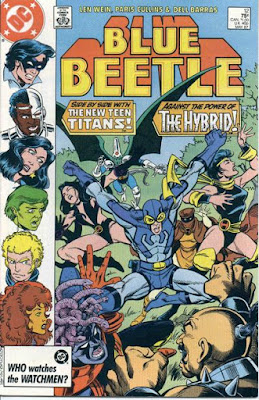 Considering everything that happened last issue, it's cool that the first page of this one starts with a recap from Blue Beetle himself. 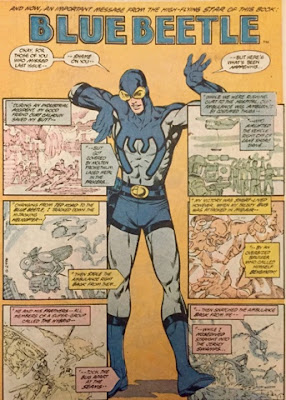 Once we're up to speed, we cut to Mento who's watching the face off between Beetle, the Titans and the Hybrid from his base in Manhattan...and he's so excited he turns his henchman from a rat to a man, then into an octopus! 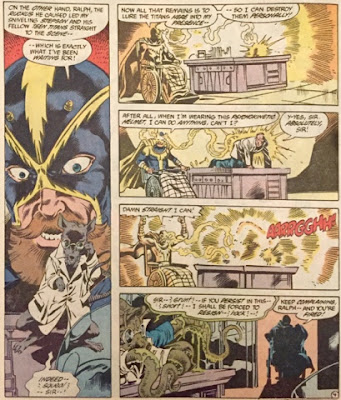 Little does he know, but some of the Hybrid don't want this fight. Pterodon jumps forward and asks the Titans to leave...for everyone's sake. Gorgon chimes in saying Mento was counting on them finding each other so he could slay them. Sadly, a few things stop this from ending peacefully. First, Changeling is determined to find his "insane stepfather" Mento even if it means taking the Hybrid on by himself. Second, Blue Beetle is unwilling to leave without getting Curt Calhoun. Lastly, not all of the Hybrid are as even keeled as Pterodon and Gorgon, and Beetle quickly finds himself caught between Behemoth and Touch-N-Go. It's not long before the rest of the Titans join the fray. 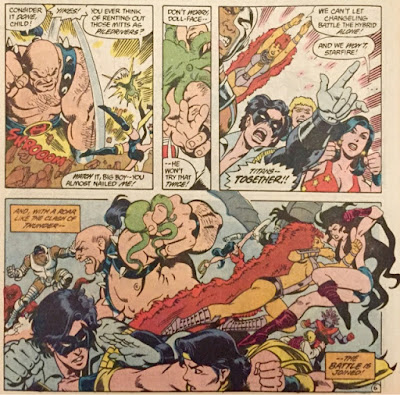 While the fight rages on, with Mento offering telepathic tips to his team...until he shifts his attention to the ambulance containing Calhoun.

Meanwhile, back in Chicago, Lt. Fisher asks the police captain for some personal time...and plans a trip to Pago Island. At S.T.A.R. Labs, Melody and Murray wonder where Ted is. She thinks he's avoiding her, while Murray just wishes he was there to help explain what happened to the promethium when Murray's boss shows up. The interlude concludes with Conrad Carapax finally uncovering Jarvis Kord's lab on the previously mentioned Pago Island.

Meanwhile, back at the brawl, the Hybrid begin to fall...one by one, as Blue Beetle and the Teen Titans begin working as a team. 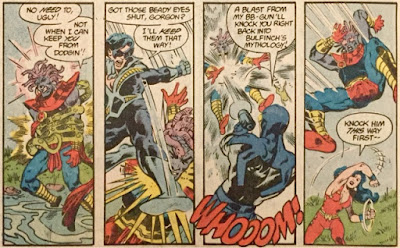 Little do they know though, but as they fight Mento is "recruiting" one last member to the Hybrid. As our heroes take out the final few villains Mento reveals his "ultimate" member, the former Curt Calhoun, now known as...Prometheus! 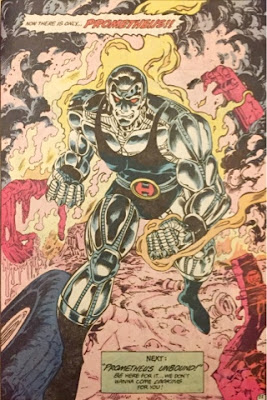 So I enjoyed this issue much more than part one of the story. The action was fast paced, and Paris Cullins' art on the fights was great! It didn't move the story very far, but it was a fun 2nd act. Will the final part of this arc be a fulfilling end? Check back next month and see!