We're (sadly) inching closer to the end of Charlton's adventures of Dan Garrett...the Blue Beetle. There's only 4 issues left, and I've already covered one of them! (#52...the first Dan Garrett book I ever bought!) So from writer Joe Gill, and the art team of Bill Fraccio and Tony Tallarico here's "Mentor The Magnificent"! 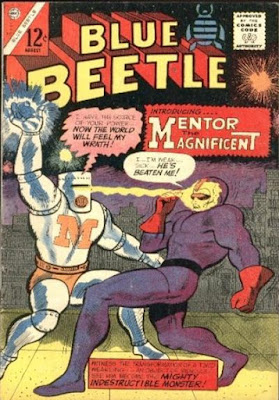 As the issue opens we're introduced to Dan Garrett's fellow professor, Jeremiah Clugg. Prof. Clugg is a loner, and even respected by his students who openly mock him. Dan wants to help, wants to be a friend but when Clugg sees him talking to Ms. Appleton he snaps. Apparently Clugg has a thing for this woman, but doesn't have the nerve to say or do anything. He immediately concludes that Dan is moving in on his woman... 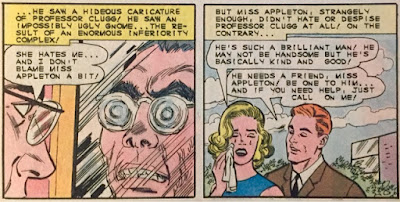 ...when in actuality the pair are actually speaking about befriending the Professor. Clugg retreats to his lab where he has constructed a robot, Mentor the Magnificent, which he plans to transfer his mind into. He begins the process, but is interrupted by a visit from Ms. Appleton. Clugg collapses, and when the woman offers her help it's Mentor, not the professor who replies! As the man comes around, she asks if the robot was speaking and he brushes it off as a hallucination. Wait, what? Why would she be hallucinating? She's not the one performing experiments and collapsing! Then he starts pushing her about her relationship with Garrett, and asks about the scarab he carries. Mentor speaks again, saying they need to know more about the scarab, and once again Clugg manages to convince Ms. Appleton she didn't hear anything. 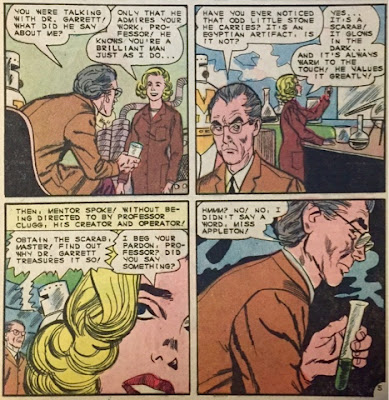 The next day Clugg pays Garrett a visit and tries to pull a fast one, swapping a green scarab for Dan's blue one. 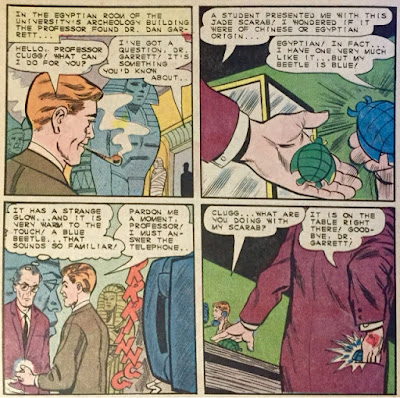 As soon as Dan realizes what happened he confronts Clugg in his lab. Clugg and Mentor have been studying the scarab. They know it has something to do with Blue Beetle and think they can tap its power to increase Mentor's strength and abilities. Clugg manages to hypnotize Dan and pry some info out of him which equates to a brief retelling of his origin and powers. 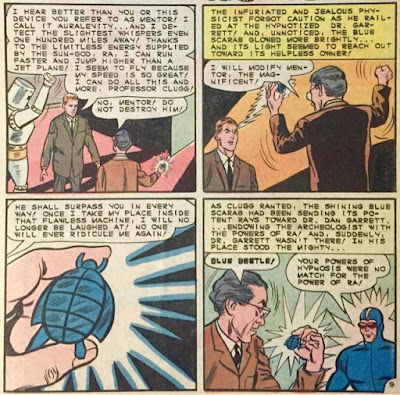 As soon as Clugg brings the scarab closer though, Dan changes into Blue Beetle, takes a few swings and Mentor and recovers the artifact. When it looks like Blue Beetle will destroy his creation, Clugg apologizes and shuts down the robot. 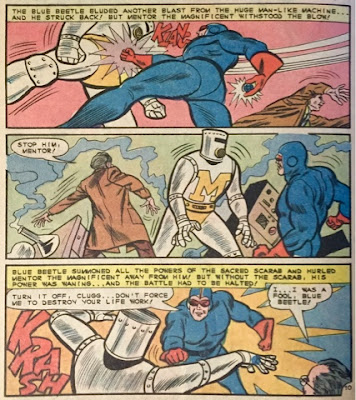 Dan resumes his civilian appearance and the men agree not to reveal each other's secrets. That is, until Dan leaves and Clugg begins plotting his revenge! As Garrett sleeps, Mentor breaks in and steals the scarab...or rather, a scarab. Dan planned ahead and left a fake laying in the open. Believing he'll soon be unstoppable, Mentor raids Fort Knox stealing gold to impress Ms. Appleton and rub his power in Dan's face. He dispatches the tanks and airplanes sent to stop him with ease... 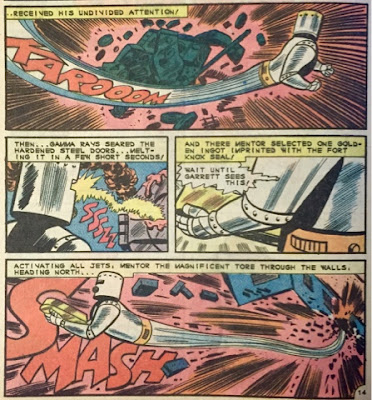 ...but isn't so skilled at wooing the fairer sex. Ms. Appleton has genuine affection for Clugg, and is actually a little put off by being approached by his robot with the offer of gold and ruling the world. All she wants is Clugg's heart.

By this time, Blue Beetle has caught up with the robot, and a rematch ensues! The titans battle in the air, trading blows until Dan drops the scarab. This is just the edge Mentor needs and as the Beetle is distracted he attacks a nearby aircraft carrier. Beetle manages to catch the falling scarab in the nick of time, and launches a final attack slamming Clugg's robot and dropping it's remains to the bottom of the sea. 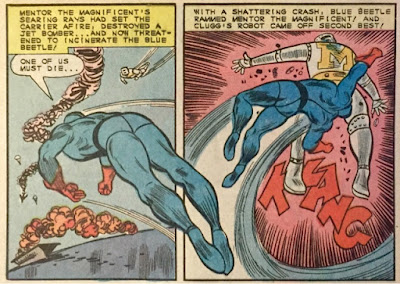 Back at the university, it seems Clugg has gone missing. As Dan, Ms. Appleton and the students lament his possible demise we readers are left with a question. Did he actually die along with Mentor or will he return to test Blue Beetle another day?

Let me start by saying, I love the art! The more I look at and re-read these issues the more I love Fraccio and Tallarico's work! It really suits these silver age adventures, and even outshines some of the stuff DC and Marvel were publishing at the time, in my opinion. As far as the story, it's another fun one. There were a few times it reminded me of some of the earlier adventures, the Red Knight in particular came to mind, but that didn't take away from my enjoyment. What do you think? Share your thoughts in the comments below.
Posted by Unknown at 12:00 AM