For some reason Charlton's Silver Age adventures of Blue Beetle, Dan Garrett (archaeologist), have turned out to be the most difficult for me to get my hands on. My searches online haven't turned up digital copies/scans (on the other hand I've scored many of Fox's Golden Age adventures in digital format), I haven't found much on eBay (mostly Ted Kord issues, which I have), and my local comic shop doesn't have any back issues...and they have a fantastic back issue selection. Luckily, while going through some old comic boxes I'd left at my mom's house...some of the very first I collected, I came across this, 1965's Charlton Comics "Blue Beetle" #52. According to the price tag still on the bag I paid $6.00 for this way back when, big money for me at a time when most books I was buying were $0.75-1.00 each! 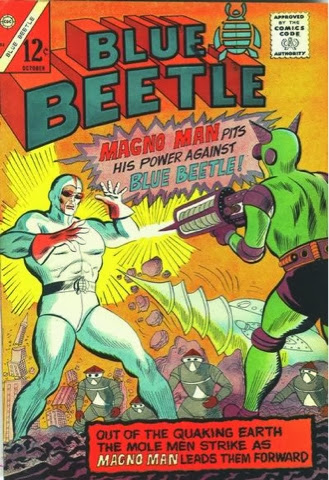 Before I go into story recap mode, I want to share this item from the letters page. 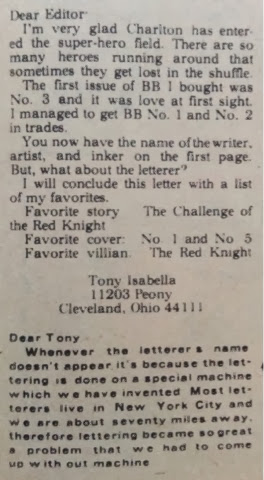 Former Marvel/DC writer/editor Tony Isabella, was kind enough to confirm that the letter was in fact from him via a series of messages on Twitter. I find it funny that Charlton included this letter though, because Tony mentions them crediting the writer and artist on their books...something they DON'T actually end up doing in this issue! If you're reading this, thanks again for taking the time to reply Tony!

On with the story...Dan Garrett is attending a lecture by a passionate, or crazy, Dr. Louis Forte. Dr. Forte suggests that man didn't descend from apes, but instead was a separate race who lived underground in caves. When Forte opens the floor to questions though Dan steps forward, and after a quick glance at the skull the doctor was using to support his theory, asks "Who was this fellow's dentist?" and points to the fillings in the teeth of the supposed ancient skull. Humiliated, Dr. Forte swears vengeance on Garrett right then and there, and delivers the message with swift punch to the face.

A week later and Dan reads some troubling news. Earthquakes are occurring in unusual places all over the world. Not only that, but there are reports that weirdly costumed figures are raiding locations in the aftermath. One item stolen was "the biggest hydraulic jacks in Western Europe". Who's behind this? A page turn later we meet Magno-Man! Who explains, as villains do, that he plans to lure Dan Garrett into a trap by setting off another quake in Great Britain...AND he knows Dan is the Blue Beetle! Like a fish who sees a worm in the water, Dan is hooked and quickly changes into the Blue Beetle and flies to England. 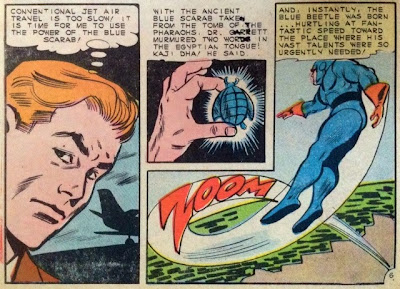 Once there Dan speaks to a local who seems to think the quake was targeted on a factory, does a quick survey of the damage and then begins tunneling underground to find the source of the quakes. Which lands him face to face with Magno-Man aka Dr. Louis Forte...and a 1,000,000 volt blast from Magno-Man's energy gun. Of course, the scarab enables Dan to absorb and redirect the power, right back at Magno! Stunned, Magno, pleads with Blue Beetle, "There is something I must tell you...you are the second intruder to come here today...enter "French spelunker Renee De Bois". As BB approaches the woman, we find out this is exactly what Magno-Man wanted as he blasts our hero with a strange ultra-violet light.

The light weakens Blue Beetle, but he swings at Magno anyway, and gets another high voltage blast knocking the scarab superhero to the ground. 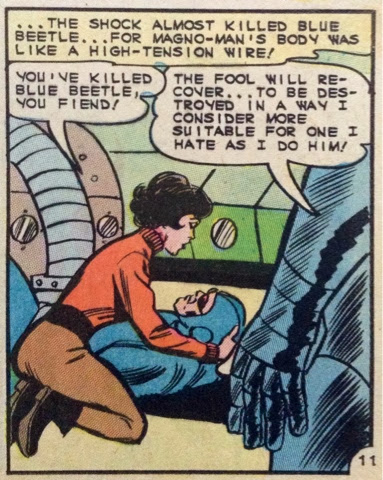 Dan is stunned, but still alive and wants to make sure Renee is safe. Forte promises to let her ago, if Dan throws himself into a volcanic fire! When Forte adds that if Dan doesn't do as he says, the girl dies too, he reluctantly agrees. Magno blasts the Beetle with more ultra-violet rays before he dives into the flames...but the flames produce their own infra-red rays cancelling out the ultra-violet and saving the hero! He uses the scarab's ability to absorb and redirect once more by collecting the infra-red rays and blasting Magno-Man's ultra-violet generator. Magno-Man manages to get away in a "mole", one of his underground drilling vehicles, threatening to destroy a major city.

Renee assures Blue Beetle she's fine and he can go after Magno. Dan uses the volcano as a quick exit and soon finds Magno setting off small tremors around New York City. Burrowing underground once again he quickly finds Magno's mole and smashes it to pieces before heading off to stabilize the Empire State Building and the Statue of Liberty, and ensuring New York is OK. And Magno? "I looked for him..." says Dan, "and I couldn't even find the wreckage of the mole! He's down there...buried beneath a trillion tons of solid rock!"

Well...that's not very reassuring is it? Some crazy cave obsessed criminal is still underground...based on this issue alone I'd guess that's exactly where Magno/Forte wants to be! This was solidSilver Age fun, though with a slightly rushed feel to the ending. The art was just ok...but there were some really interesting panels and page layouts, again though, most of all it was fun, and isn't that what comics should be?

See you next week!