I noticed something interesting recently, in 1939 Dan Garret was appearing as the Blue Beetle in both "Mystery Men" and "Blue Beetle" for Fox Features Syndicate in 1939...and with different costumes!

"Mystery Men" #1, published in August of 1939 featured a blue blazer, fedora, face mask and large beetle emblem on his chest, while "Blue Beetle" #1, published within a few months had Dan in the better known blue chainmail, with a scarab on his forehead and belt. The costume even changes from appearance to appearance in "Mystery Men" during 1940, even though it remained fairly consistent in "Blue Beetle" at the time. 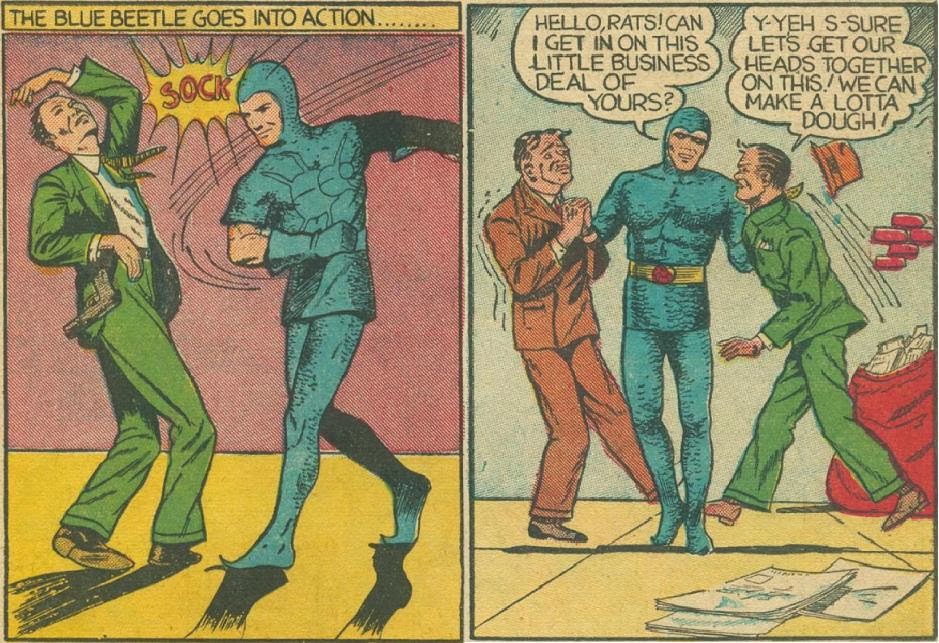 From "Mystery Men" #2 and #4
In "Mystery Men" #2, Dan ditches the fedora, blazer and mask for a suit of short sleeved blue chainmail with a beetle design across the chest. No mask to hide his identity either, just a hood with antennae. A few issues later and he's starting to look a little more familiar. "Mystery Men" #4 gives us a more recognizable long sleeved blue chainmail suit, with a yellow belt, and domino mask. Not exactly the same as "Blue Beetle" #1, there's no scarab on his head, but not too far off.﻿

From "Blue Beetle" #2 and #10
Meanwhile, over in "Blue Beetle" #2, Dan got his yellow gloves. For me, this is the most iconic look for "rookie patrolman Dan Garret". Starting with the cover of "Blue Beetle" #9 Dan's gloves and belt turned red (although he kept the yellow accents on the interior pages of that issue). Then from "Blue Beetle #10 until #60 (the end of the original run) he was consistently wearing the red gloves and belt. (I always associate the red gloves with archaeologist Dan Garrett though) What gets me about this is the fact that both titles were being published by Fox Features Syndicate simultaneously, but with no apparent editorial continuity. You'd think someone would have said "Wait! He had antennae last month!" or at least thought "Maybe the readers would want to know why we changed him from the fedora to the hood?"...instead they played fast and loose until they nailed the look that stuck...which isn't a bad thing, just a curiousity. Maybe it had something to do with the credited creator/artist/writer Charles Nicholas being a pseudonym used by at least three different people? Like the answer to how many licks it takes to get to the center of a Tootsie Pop...the world may never know...
See you next week!
Posted by Unknown at 4:30 AM