Fall Of The Blue Beetle 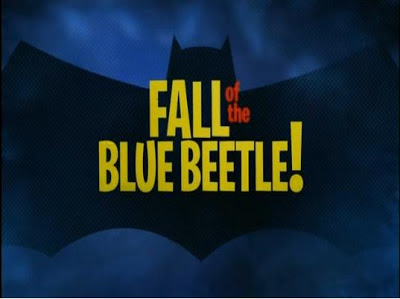 Ok…the last time we talked “Batman: The Brave And The Bold” I covered the episode “Rise Of The Blue Beetle”. It was fun, but was Jaime-centric, and as I said at the time “Jaime’s no Ted”. Well, today we’re going to look at “Fall Of The Blue Beetle”…it’s still pretty Jaime-centric, but it has a decent sized serving of Ted Kord!
The episode starts “two years ago” with the Batmobile and the Bug arriving outside a secure industrial type building. Batman leaps from the Batmobile and good ol’ Ted swings down from the Bug. As they make their way in they are confronted by security guards…Bats starts to reach for his utility belt but Ted stops him. “Allow me!” he says drawing and firing his BB Gun, which disorients the guards and leaves them on the ground puking. As they crawl thru the ventilation ducts (Teaser Tuesday #7) into the industrial complex they compare notes and discuss tech, knock-out pellets, laser torches, and how people just don’t appreciate the time and effort that goes into good gadgets. After a showdown with a laser security system, the floor gives way and they fall into an evil security guard lunch room then. Shoulder to shoulder, they prepare to continue the fight! It’s only 2 minutes long, but this is one of my favorite BMBB pre-title sequences! It’s not simply that it’s Ted…it’s that Ted is portrayed as Batman’s equal! It makes perfect sense too…both are ordinary men, with no super powers, who fight the good fight under extraordinary circumstances, and rely on technology to even up the odds (to put it simply). What happens next? Read on…
Once again we find Jaime discussing superheroes with his friend Paco, this time by a campfire. Jaime’s telling Paco what he believes to be the “secret origin of Green Lantern” (he’s dead on by the way). Paco blows him off saying the story about a dying alien commanding his ring to find a worthy successor is stupid. Heroes aren’t chosen…they luck into it. Jaime’s apparently trying to understand his place in the superhero world, and the idea that it may have been just dumb luck isn’t sitting well. It bothers him so much that he decides to travel 1500 miles cross country and interrupt Batman’s fight with Dr. Polaris to see what Bats thinks about heroes being chosen vs. selected by dumb luck. This of course irritates Bats a bit, and when Jaime presses for an answer to the question “Do you think I was chosen to replace the Blue Beetle because we share the same heroic traits?” Batman snaps back with “There’ve been a lot of Blue Beetles and you’re nothing like the one I knew!” Ouch! Burn! Wait…”a lot”? Has Batman been reading my blog? (see this post à click me) Bats leaves in a huff and Jaime’s scarab decides to look for info on the previous Beetle online. They end up at Kord Enterprises looking for the “Hero of Hub City”, quickly stumbling into Ted’s underground headquarters…sort of a “Bug Cave”. (nice shot of Dan and Ted’s outfits behind glass!) 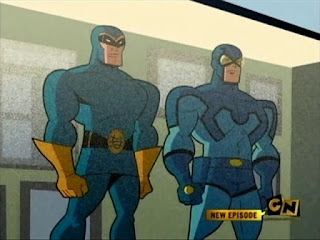 After hacking into Ted’s Bug ship with the help of the scarab, Jaime heads to the last place listed on the Bug’s trip log…Pago Island…thinking maybe Ted’s still there, injured or in trouble. When he arrives he’s greeted by several robo-insect sentries and bearded man. When Jaime says “I’m the new Blue Beetle” the bearded guy says “So, you’re my replacement? I thought you’d be taller. Welcome to Science Island. I’m Ted Kord.” Man…”Ted” is kind of an ass. Or is he? Things aren’t always what they seem.
Batman is on his way to Jaime, when he flashes back to his last mission with Ted. See, Ted had Dan’s scarab, but couldn’t figure out how to get it to work, so he took it to his scientist uncle Jarvis. Jarvis doesn’t want to give it up though so Ted and Bats are forced to fight an army of Jarvis’ robots to get it back! 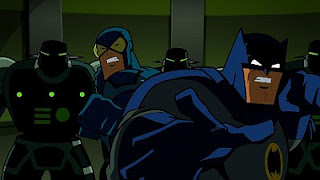 Cut back to Jaime as “Ted” is telling him about his dream of harnessing the scarab’s power to create a utopian world that will benefit all mankind. (Something seems fishy here...isn't that how a lot of supervillain speeches start?) Jaime asks Beard-O why he was chosen and is told “I sent out my scarab in search of an ally…someone of great virtue…” (yeah, ths is too good to be true) After mentioning Batman in casual conversation Jaime heads off to bed, and “Ted” orders one of his little insect robots to set up defense perimeters…protocol “Batman”! Beard-O is a rat! Jaime finds another little robot toting around some bullets and it becomes clear to him now too…something stinks…and he needs to call in Batman…who is quickly subdued, along with Jaime, by robo-bug guards. While tied up, Bats reveals that “Ted” isn’t who he says he is…he’s the real Ted’s evil Uncle Jarvis! Bats also reveals how the real Ted swore an oath to continue the work of his mentor, Dan Garrett, and how Ted sacrificed himself to put an end to Jarvis’ plan to launch a rocket full of robots at Hub City! He explains that he held off on telling Jaime all this because “our work is dangerous…and not all hero stories have happy endings” Jaime powers up the scarab (not sure why he waited this long) and breaks them free, then nails Jarvis with a sweet right hook! They fight more robo-bugs as they set the self-destruct in Jarvis’ lab and rush to escape the island! 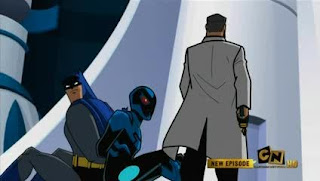 I definitely had more fun with this one than I did with “Rise Of The Blue Beetle”…mostly because this had some strong Ted moments and some great Blue Beetle history! If only there were more Ted Kord moments on “Batman: The Brave And The Bold”…oh wait, there are! We’ll talk about them another time!
Remember you can follow me on Twitter @KordIndustries1