"Jaime Reyes: Reluctant Wielder of the Power of the Blue Beetle Scarab. Ted Kord: Billionaire Industrialist and Sidelined Superhero. Together They Are The Blue Beetle...Whether They Like It Or Not." Last issue Arion crushed Dr. Fate, the people of El Paso began turning into monsters like the Horde, OMAC showed up, and Jaime donned Ted's old costume! Keith Giffen, Scott Kolins, and J.M. DeMatteis are back for issue #9 and a story called "Life, Death and Absolute Chaos"! 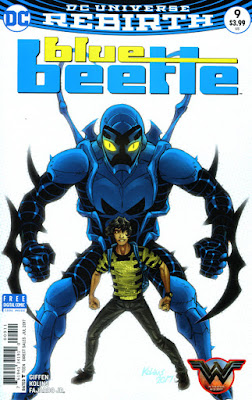 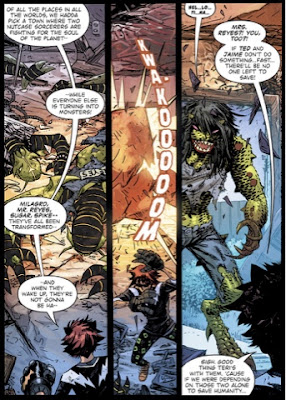 Elsewhere, Jaime falls from the sky as Ted reminds him the idea is to hold onto the t-bar until he can make a safe landing. He's used to the power of the scarab, and Ted is trying to train him to be a hero without those abilities. Jaime needs to get back to the battle between Fate and Arion quickly, and he wants to bring OMAC in on the action. Ted knows how to accomplish that! Teri Magnus! Apparently, she's a speedster...something Ted didn't think was important enough to share until now.

She grabs Jaime and runs to where OMAC is smashing away at a group of Horde creatures. Teri stands down, on Ted's orders to watch and only act if she needs to get Jaime to safety quickly. Jaime tries reasoning with Kevin, his friend who had transformed into OMAC earlier...with limited success. That is, until another voice answers. The voice of Brother Eye! The sentient computer gives Jaime 60 seconds to make his case. Jaime again directs his appeals for help to Kevin. 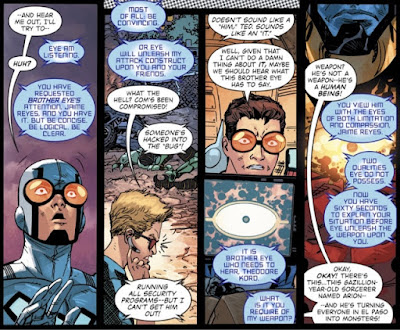 At Brenda's aunt's house, Paco pounds on the door. He's been turned too and he's trying to get to Brenda! 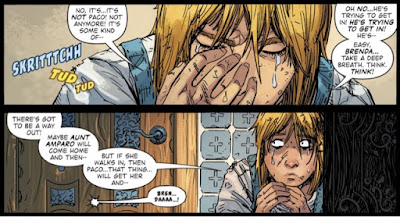 The team of Ted, Jaime, Teri and OMAC take to the sky in the BUG. Brother Eye is curious about several things, including Jaime's ability to get through to Kevin, and the sorcerers Arion and Fate and what they could mean to its plans.

Below ground Arion seems to be drawing on the chaos he's created. When Mordecai says he's looking foward to Arion's new world, a new Atlantis, the sorcerer chastises him. 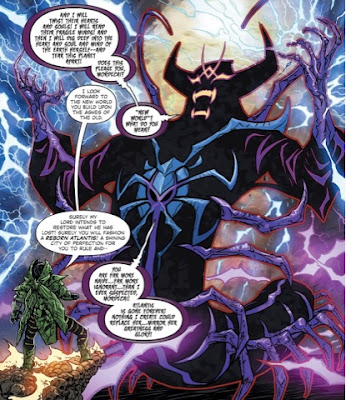 He has no intent on building a new kingdom...just creating endless death and chaos! And that's when our heroes arrive on the scene! 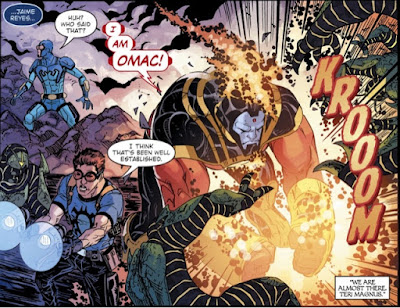 Too bad it doesn't seem like a unified front. While Ted rushes in blasting the Horde with his BB Guns and OMAC smashes them, Teri stumbles on Fate's helmet and is sent on a side mission by Nabu to reunite the helmet with Kent Nelson. 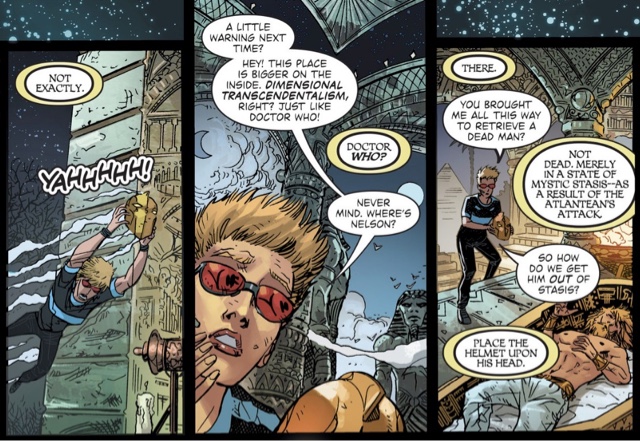 And still hearing the mysterious voice, Jaime wanders away from the fight to see what it is...

I can't believe I didnt put this together until now! When I spoke to Keith Giffen last year he mentioned Teri and Tina from Justice League 3000 making an appearance in Blue Beetle...but until now, seeing her use her powers, it didn't click! Teri is the future Flash! But wasn't Tina the future Batgirl? Hmmm? Giffen, Kolins and DeMatteis are cramming so much into this book...it's awesome! That moment with the Paco-monster trying to get at Brenda? It was a single page...but that art by Kolins is so genuinely creepy, capturing the fright on the girl's face as she's stalked. It immediately put me in mind of a Living Dead movie! Plus the references to things that have come before (there's mention of Ted's heart attack), and the humor c'mon...a Doctor Who joke? That was clever!) and pop culture references that made JLI so much fun. Every issue has a new twist, or a new reveal, that keeps me on the hook waiting for next month! This time it's "Who or what is calling to Jaime?" I'm leaning toward the scarab. What do you think Beetlemaniacs?