"Jaime Reyes: Reluctant Wielder of the Power of the Blue Beetle Scarab. Ted Kord: Billionaire Industrialist and Sidelined Superhero. Together They Are The Blue Beetle...Whether They Like It Or Not." Last issue we got some teasing glimpses at the origins of the Blue Beetles, and learned that Dan Garrett was once in possession of the scarab, and had a run in with Dr. Fate...though it's unclear if he was a hero himself. Keith Giffen and Scott Kolins are back with issue #5 and a story called "The Best Laid Plans..." 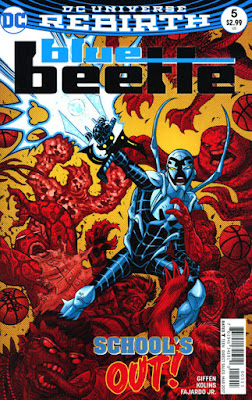 El Paso, Texas, two members of the Posse are being seen at the clinic of Dr. Reyes. Blur has brought in Rico, aka Quick Draw, who broke his hand wiping out on a skateboard. Suddenly a man walks into the waiting room...the man we last saw at the airport at the end of issue #3. Blur tries to tell him Doc Reyes in busy, but he blows right by her. A panel later there's a flash of green energy and Quick Draw is tossed through the air. 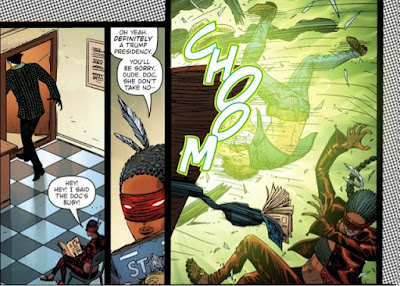 Blur powers up and manages to snatch Doc Reyes from the hands of a now armored Mordecai (he's kind enough to tell us his name). before teleporting away. It only delays things a second though, as Mordecai appears to be able to teleport too, and locates them in no time! Quick Draw rushes from the doctor's office and tries to join the fight, but is met with a devastating (possibly fatal) blow! Blur grabs the Doc again and teleports them to the police station...but once again, Mordecai follows! 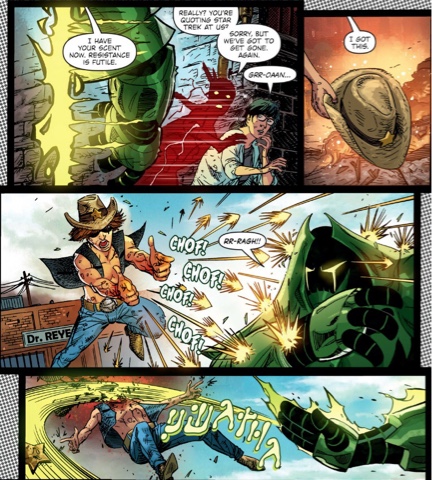 Elsewhere, Jaime, Brenda and Paco are walking and talking. The friends are curious about the results of Ms. Magnus' tests, but Jaime says he hasn't been told anything yet. Paco suggests that maybe Jaime should get a second opinion from his mom, when suddenly there's an explosion! When the dust settles, Jaime sees Mordecai with Blur and his mom...and he transforms into Blue Beetle! 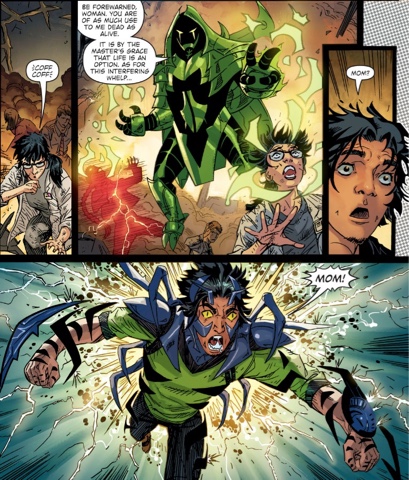 It seems luring out our hero was the villain's plan all along! Blur tries to get Mrs. Reyes to safety again, but loses her somehow. Luckily Doc Reyes lands by a coffee house, right in front of Sugar and Spike, before she runs off. They radio in to Ted, before giving chase. 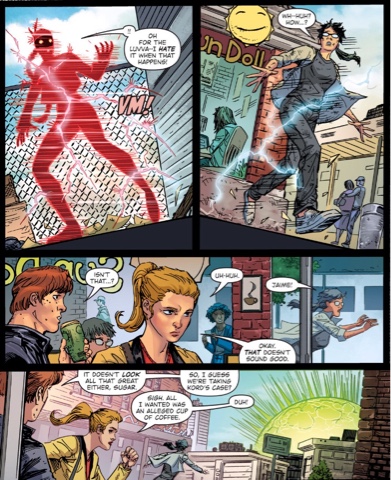 Mordecai gets the edge on Blue Beetle and begins doing something no one else has been able to do so far...he starts removing the scarab! And then the Posse arrives! 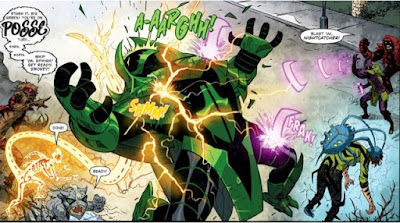 While Blue Beetle and the Posse try to take down Mordecai, Ted starts up the BUG and he and Ms. Magnus go into action, grabbing Jaime's family and moving them to safety. The villain doesn't go down easy, and Root (leader of the posse) suggests a retreat, or at least putting some distance between them so they can regroup. Jaime won't budge though...Mordecai went after his mom! 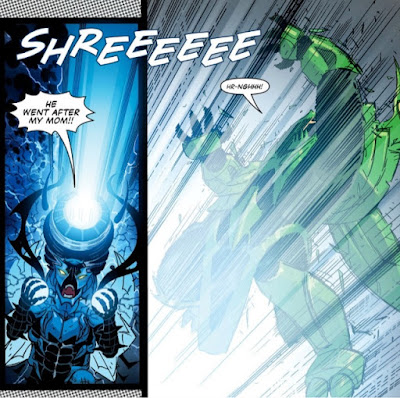 Blue Beetle powers up like never before a blasts Mordecai leaving a huge crater in his wake! That's not the end of the rogue though. During the blast he's actually summoned away by something stronger...something that resides in the huge sarcophagus we last saw the Horde guarding in issue #3. The being in the crypt is disappointed by Mordecai's failure. 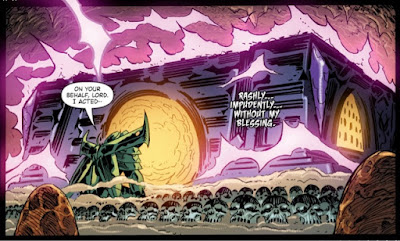 It wants the scarab for something that's coming...and that something appears to be Dr. Fate! 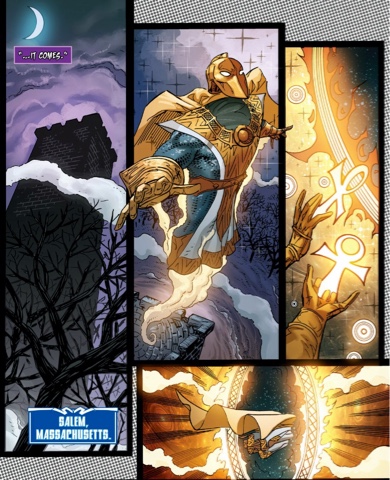 This issue flew by! Non-stop action and excitement! The emotion of Jaime's family being involved, threatened? That's some powerful stuff! The Posse's return was a welcome addition too, though I may have preferred to see Ted more involved in the fight. If I had one complaint though...last issue teased some bits of the origins...and this issue left those plot threads up in the air. That's part of what I've enjoyed, the questions, the teases...but I really hope we start getting more answers soon!
Posted by Unknown at 12:00 AM