Last issue, Blue Beetle took on Typhoon and Bruce Wayne...and managed to outsmart both! What's next? How about a team up and a tough guy? John Rogers and Rafael Albuquerque are back, and joined by David Baldeon and Dan Davis with issue #18 (the halfway point of this series) and a story called "Away Game". 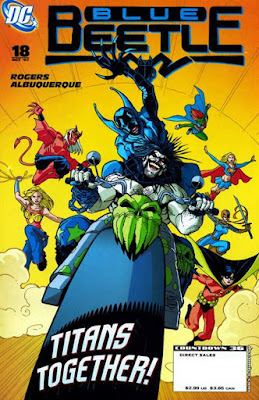 Jaime and friends are on a field trip to the Luthor Lone Star Launch Facility.
In fact there are teens from many states visiting, all to get a look at a space launch at "America's first private commercial spaceport".  The place is so crowded that, distracted by a bug in his ear (get it? Bug/scarab), Jaime bumps into another teen...Tim, as in Tim Drake, aka Robin! 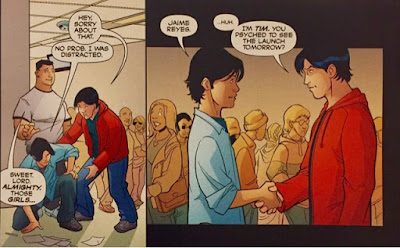 To be fair, that's not revealed right away, but still the cover gives you that the Teen Titans are the guest stars, and once you meet a kid named Tim it's not hard to put together. Paco tries hitting on two blondes, while Brenda vents her frustration to a white haired boy. As the teens regroup, Tim seems surprised that Jaime didn't pick up on the aliens in his group...while Jaime tells Paco that the scarab DID get something from the blondes. Both sides decide they need to check out the rocket and suit up...unfortunately neither is aware of the other!

Via radio Jaime tells Paco and Brenda that the scarab picked up a Reach communication indicating they're concerned about the rocket. At the same time Robin communicates to the Titans that Batman has made it a priority that the ship make it to space. 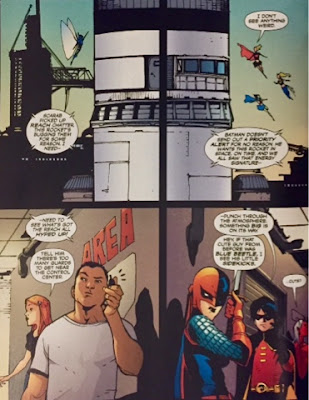 Inside the facility, Ravager spots Blue Beetle's "sidekicks", who she, Robin and Kid Devil quickly subdue for questioning. Outside, in a classic case of mistaken identity, Blue Beetle spots Miss Martian, Supergirl, and Wonder Girl and believes they're Reach hired guns...leading to a fight! Using Paco's radio, Robin tries to diffuse the situation as Jaime tries to explain he didn't recognize the Titans because a) he didn't see Supegirl's "S" (his mom raised him not to stare), b) he didn't think Wonder Girl was actually in a costume (Kid Devil agrees,"a belly shirt is hardly a uniform"), and c) Miss Martian is the first green girl he's seen. 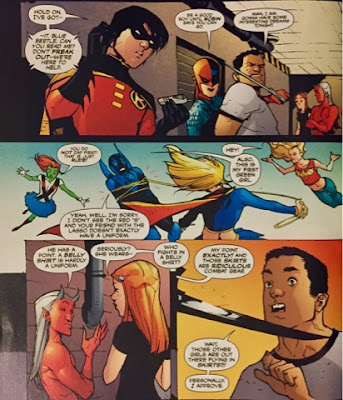 Its a good thing they settled that quickly, because at that moment the scarab freaks out, alerting Blue Beetle and the Teen Titans of the impending arrival of Lobo! Robin immediately goes into action! He sends the heavy hitters, Supergirl, Wonder Girl, Miss Martian and Blue Beetle, to stall Lobo. Then he contacts Oracle, who'll hack the facility's computer system and walk Paco and Brenda through the early launch of the rocket. Finally, along with Ravager and Kid Devil, Robin will evacuate the civilians from the building. Sounds simple enough, right?

There's some fun moments, like when Jaime is talking to the scarab, which the girls think is Jaime's "imaginary friend", and he replies that being teased by the popular girls reminds him of Freshman year. 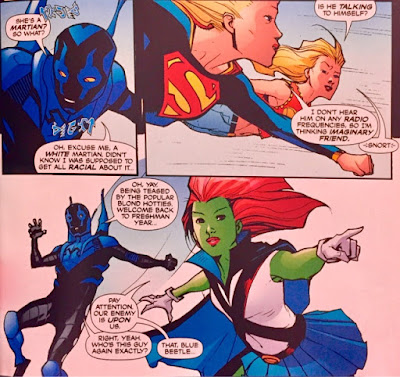 Kid Devil's evacuation method, running through the control room declaring that he's a demon summoned by godless science and the teaching of evolution, provides some laughs too, as does Brenda's passive/aggressive jealousy of the superpowered girls. But that's not what we're here for is it? It's the fight with Lobo, right? The advance team swoops down on the Main Man...and Supergirl is snatched out of the sky and tossed right through Miss Martian. Wonder Girl tries to lasso the last Czarnia, and also finds herself thrown aside. Blue Beetle manages to blast Lobo in the shoulder, but quickly finds himself wrapped up in the bounty hunter's chains...until Supergirl manages to free him with a blast of heat vision. 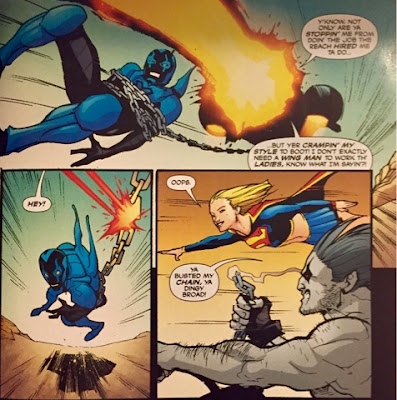 As he turns his adventure to the last daughter of Krypton, Miss Martian and Wonder Girl literally take his space bike right out from under him, sending him through the air and right into Supergirl's waiting fist! He falls, tackling Blue Beetle in the process. Then, as Brenda and Paco begin the final countdown, Robin rallies the Titans and they attack Lobo in force! The Main Man manages to grab Ravager though, and holds her under the rocket in an effort to keep the Titans at bay...but Blue Beetle saves the day! Swooping in, Jaime manages to shield himself and Ravager from the rocket's engine and then...it's over. 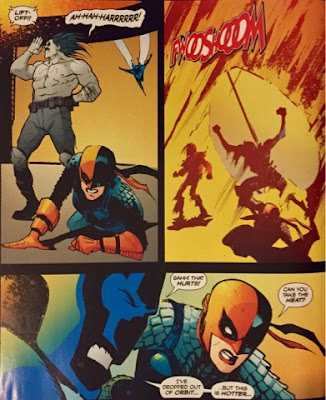 With the rocket launch complete, Lobo's contract is blown...there's no more reason for him to stick around, so he leaves. 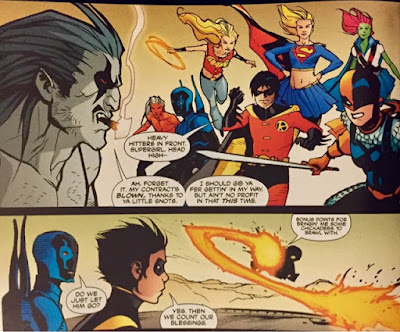 Robin informs Blue Beetle that Batman had anti-Reach tech on the spaceship, and that the Dark Knight believes Jaime about the Reach threat. Robin also points out that while Blue Beetle has power, he lacks some fighting skills. Wonder Girl invites him to the Tower for training, an offer seconded by Ravager who says she also needs to thank him, before the Titans depart. 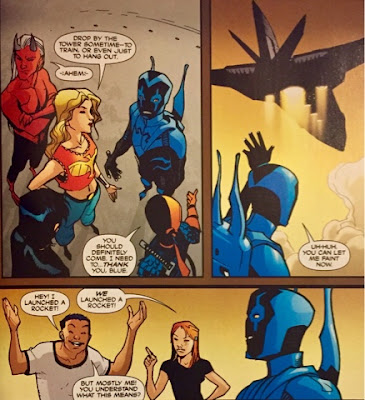 This was another fun, if mildly inconsistent issue! The art chores are split between series regular Rafael Albuquerque, and the team of David Baldeon and Dan Davis. Both do great work, but the different styles make it a little uneven visually. John Rogers story is solid, and has many of the same qualities I've come to love about this book...but even that seems a little uneven, in some sequences jumping rather abruptly from one idea to another in the span of 2 panels, leaving the reader to fill in the blanks. Don't take that the wrong way, I definitely enjoyed this issue, and this version of the Titans...far more than the team up between Ted and the Titans.
Posted by Unknown at 12:00 AM