The Way The Brawl Bounces!

Last month we got a stand alone story that tried, in it's own way, to tackle the issue of homelessness. This month we see the best thing to hit athletics and adventurers since Sportsmaster and Casey Jones! Well...we get a jai alai inspired villain named Overthrow...that counts for something, right?. Len Wein, Ross Andru and Danny Bulanadi are back for issue #17, and a story called "The Way The Brawl Bounces!" 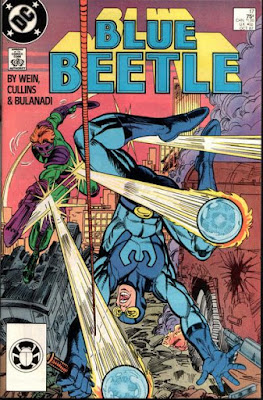 Before we get to the main event, we take a quick trip back to Pago Island.Something, or someone is crawling up from the rubble...the "original"* Blue Beetle, archaeologist Dan Garrett! Summoned by an ancient power, he is told his mission isn't over! He needs to go out into the world, with a fancy new costume, and hunt down the impostor who stole his name! 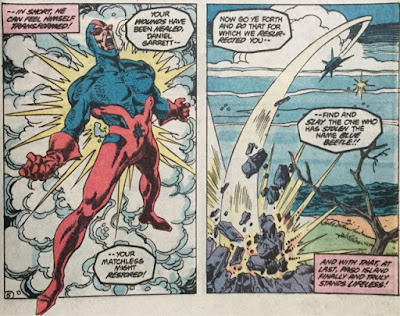 At that moment, in Chicago, Ted Kord finds himself under attack...from a very angry Melody! Ms. Case has been upset about Ted disappearing and when she finally catches him, just before he's about to slip out for "an appointment", she blasts him for his irresponsibility. 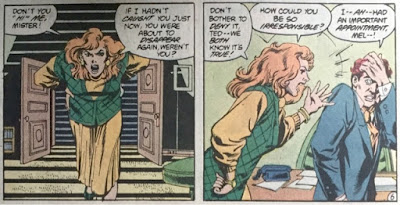 She probably would have said much worse if not for the fact that Randall Truman, her new assistant just happened to bump into Ted...literally. Ted uses the chance to make his escape and meet with Lt. Fisher.

When Randall steps out to run a few errands, Melody is left wondering who besides her and Angela are left?

And then...BWA-WHOOM! Overthrow makes his presence known by tossing plasma bombs like they were beads at Mardi Gras, determined to bring down the "American military/industrial complex" starting with Kord Omniversal! Good thing Ted's not far away, as he's been chatting with Lt. Fisher helping the cop track down some crooks. In no time the BUG is in the sky, and Blue Beetle is on the scene! 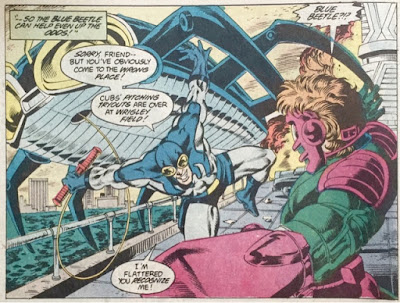 Something is different about Overthrow. He's as quick and agile as anyone Ted's ever fought, and he's able to catch and throwback a blast of air from the BBGun! 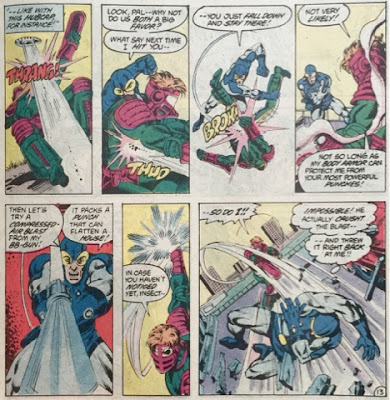 Quick and agile is great, but it doesn't win a fight. Using your flying ship to catch your opponent in a net? That wins fights...at least until Overthrow reveals that he planted a plasma bomb at Kord headquarters on a delayed fuse. 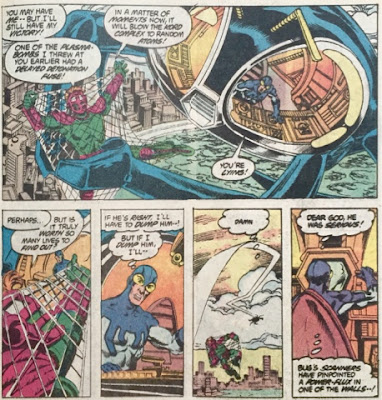 Blue Beetle sees no other choice but to release the terrorist and race back to locate the bomb.

Everyone at Kord Omniversal has noticed Jeremiah's absence, so it only seems logical to check in on him. Catalyst, on orders from Cornelius, is trying to chemically convince Jeremiah to reveal the whereabouts of a stolen compound, XD-3. Murray Takamoto heads off to London for a job offer, while back in Chicago, S.T.A.R. Labs founder Garrison Slate uncovers the truth about an experiment none as "File 13". When he tries to have it stopped he finds he's too late...the experiment, a young blond haired human, has escaped! And if all of this wasn't mysterious enough...Dan Garrett is ripping through the city looking for the impostor who stole his name, Blue Beetle! 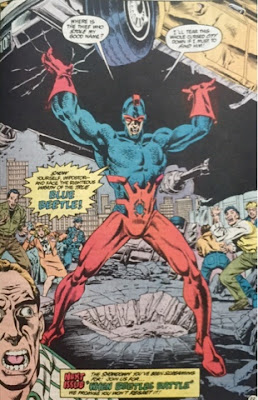 Quite a bit going on, huh? We plenty of chances to catch up on supporting characters and plot threads, introduce a new villain, and see the return of Dan Garrett! Fast paced and full of excitement! What's going to happen when Dan finds Ted? We'll find out next month!


* I say "original" because in the context of the story, he is...even though we all know Dan Garret (single T) the cop was truly the original Blue Beetle