Blue Beetle just returned from teaming up with Metron and Lonar of the New Gods to rescue his friend Brenda from a strange planet. What's next on his agenda? A little one-on-one time with Peacemaker! John Rogers and Rafael Albuquerque are here to tell us how that goes, in issue #12..."Meet The New Boss..." 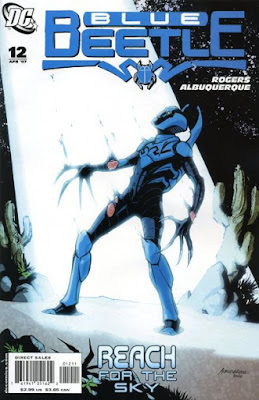 Things start out with a BOOOM! Jaime and Brenda are back from outer space, they just boomed in to find La Dama with that sad look upon her face. Well, c'mon...they did survive! Seriously though, after boom tubing back to Earth, Blue Beetle helps the Mother Box journey to the great beyond...much to La Dama's dismay! 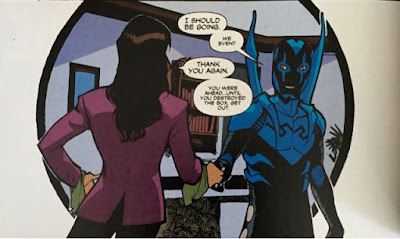 Jaime figures he'll lay low for a while, go to school and help with the occasional fire. It's a great plan until Paco, Hector and Nadia inform him of some strange cattle mutilations. He asks Peacemaker to come along, figuring the former hero may be able to mentor him, share what he knows about the scarab. The best laid plans of mice and men, they say. The dynamic duo soon find themselves in an old mine, led there by the scarab, were Peacemaker shares that he has part of the scarab in his head, or rather some of the scarab's info...he just can't understand all of it. He's also more than a little reluctant to play mentor, but that doesn't stop him from dispensing advice. 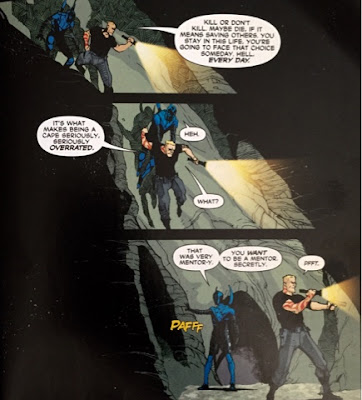 Suddenly, a huge blue scarab bursts from the walls of the mine! 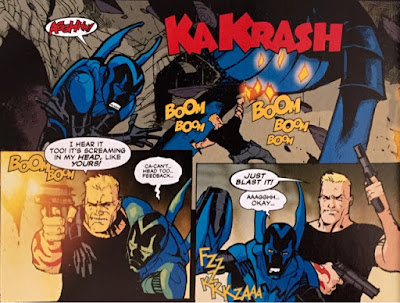 Blue Beetle and Peacemaker manage to avoid it, and it disappears into the darkness. While Peacemaker tries to determine where the creature went and if it's coming back, Jaime runs into a problem...his scarab shut down! Struggling to reactivate it, Jaime is able to produce just a single arm blade. Luckily that's enough to sever a cable on an old elevator and get them back to the surface.

Back above ground, Jaime and Peacemaker put their heads together. Jaime says his scarab shut down because the thing in the mine is from the Reach, where Metron told him his scarab originated from. Even if Jaime's scarab doesn't want to cooperate, Peacemaker is still able to sense the other creature, so the two hop on his motorcycle and head off to track it down. In no time they arrive at a gas station in the desert, the same one Jaime stumbled into after returning from space. The clerk recognizes Jaime, and is glad he's doing well...until the giant creature attacks! 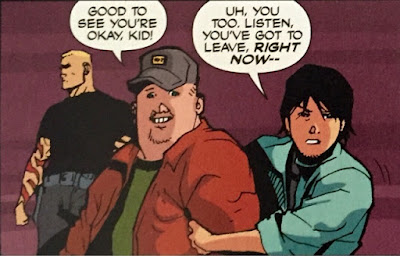 After some words of encouragement from Peacemaker, Jaime is able to take control of his scarab and armor up! 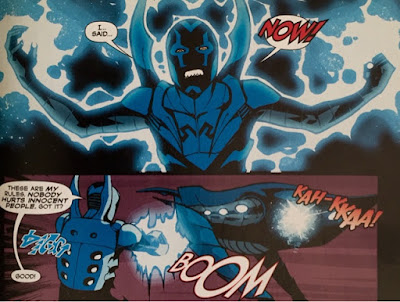 The trio begin blasting at the beast, but after each attack it phases out of site only to return shortly after. Jaime spots a gas truck and gets an idea. Jaime attacks the creature as Peacemaker drives the now burning gas truck toward the creature. It phases out as expected, but when it reappears the truck is in it's belly. And faster than you can say KRAKKA-THOOM! the battle is won. 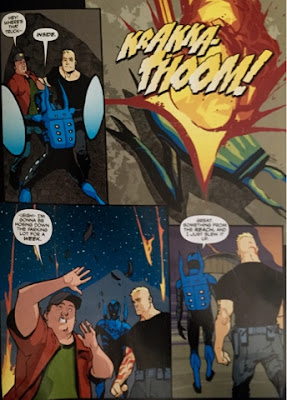 Disappointed, Jaime laments that he was close to learning more about the Reach, but they destroyed the chance he had. That is, until a being steps out of the shadows identifying himself as a representative of the Reach and adds...that they are already here! 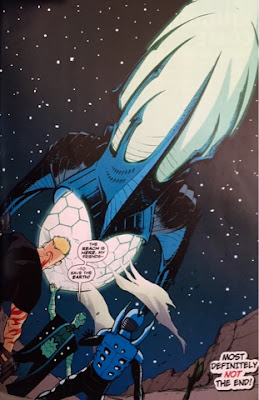 So, I feel like this is a turning point. Up until now Jaime has wondered about the origins of the scarab, and now we're on the edge of getting answers. Having watched "Young Justice" though, I wonder if the answers he'll get from the Reach will be the ones he wants. On another note, I really enjoy the relationship between Peacemaker and Jaime. Heres hoping that continues!
Posted by Unknown at 12:00 AM