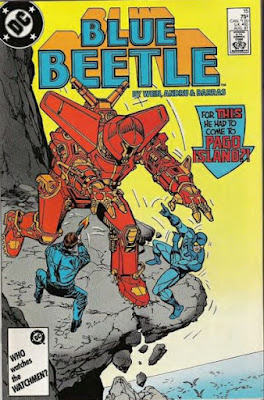 Right out of the gate, Ted makes a mistake. With Carapax charging at Fisher and Blue Beetle, Ted lets slip that the villain's robotic body was designed by his uncle, Jarvis. He really should work on his "inner monologue"! I guess Ted figured in all the excitement Fisher wouldn't notice, but as they try to make their escape he makes it clear he heard! 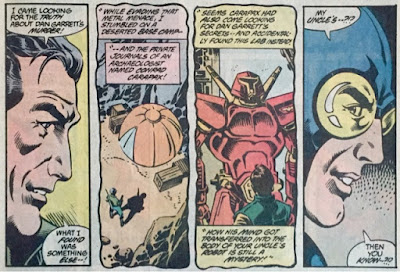 They agree escaping Carapax and the island are more important at the moment though so they head toward Jarvis' old lab. The robotic rogue follows them and, with a flash of acrobatics, Blue Beetle buries the villain under a ton of old computer equipment. 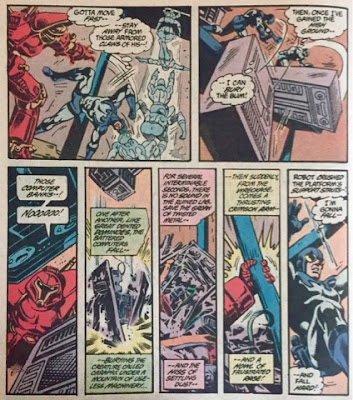 Fisher and Kord barely have a moment to celebrate before Carapax is back on his feet and on a rampage! Fisher finds some explosives and sets a timer, hoping for the best. The explosion buries Carapax once more, tosses the hero and the cop clear of the lab...and knocks them out.

At Kord Omniversal, Melody is frustrated by Ted's absence at the office...so she starts going through his desk, finds a well written report, and then summons the author to the office to offer him a promotion...and flirt! Jeremiah stops by, looking for Ted too. When he learns Ted isn't there, he heads out to his car...where Catalyst is waiting! The human pharmacopoeia quickly subdues Jeremiah with a sedative from his finger tips. 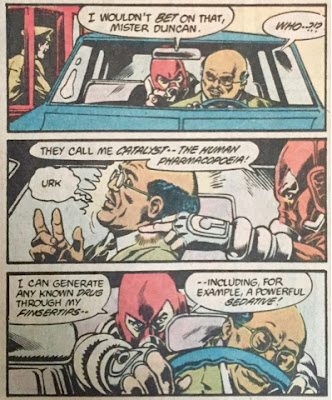 Back on Pago Island, Fisher and Blue Beetle come to, and decide its time to get out of there. Ted summons the BUG, but no sooner do they climb on board than Carapax bursts from the rubble, proving why he's nicknamed "the Indestructible Man"! Ted tries blasting his foe with solar energy and magnetic pulses, but they have no effect. With the BUG's shields taking damage, Fisher suggests they hightail it out of there. Ted's hesitant, but figures if they blast the remains of the Capt. Sledge's ship Carapax will be trapped on the island, and no longer a threat. Carapax refuses to go down without a fight though, and tosses a cable at the BUG to hitch a ride. 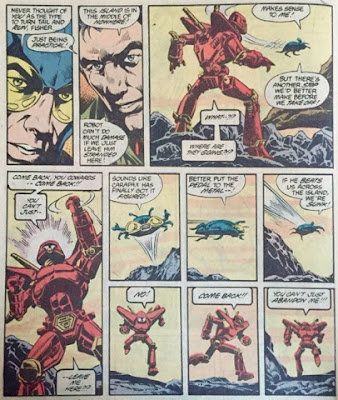 In Chicago, Garrison Slate holds a meeting at S.T.A.R. Labs to let everyone know he's looking for results. He plans to rebuild the company from the bottom up! In the meantime, former S.T.A.R. employee Murray Takamoto is out looking for a job, and he may have one. While Catalyst (in a civilian disguise) puts Jeremiah on a plane to France, where Klaus Cornelius eagerly awaits his arrival. And on the roof of Kord Omniversal, a man calling himself Overthrow plans an attack on the building. 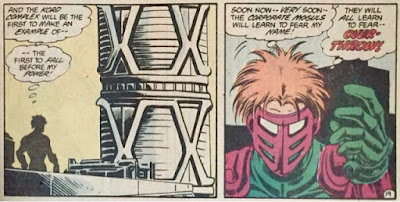 In the air above Pago Island, Carapax smashes through one of the BUG's eyes and climbs into the cockpit. Ted and Fisher retreat to a reinforced bulkhead, to plan their next move. Ted leads Fisher through an escape hatch and the duo make their way back to the cockpit...from the outside of the ship. Almost as soon as Blue Beetle is back in the drivers seat, Carapax realizes what's going on...but it's too late. Ted takes the BUG up high and fast, then down and faster creating a moment of weightlessness. With Carapax off his feet, Blue Beetle tosses the robot out of the open window. Carapax tries to grab the still dangling cable, but a quick blast of solar energy cuts the cable, and sends the villain plummeting into the sea! 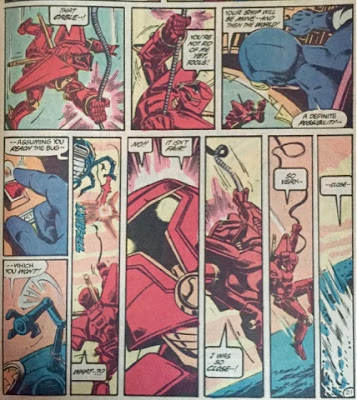 Once again, an action packed roller coaster of twists and turns. Wein is great at weaving all of these threads and leaving us (or me anyway) wanting more! Ross Andru's art is good...but the action's just not the same without Paris Cullins' pencils if you ask me. Could this really be the end of Carapax? What will Fisher do now that he knows Ted Kord is Blue Beetle? And what about Melody, Jeremiah, Catalyst and Overthrow? Come back next month and we may have some answers!