UPDATE: The Charlton Blue Beetle Contest That Was

Hey Beetlemaniacs! I have an update on the 1964 Charlton Blue Beetle contest I covered here and here.

In case you don't remember, or don't feel like following the links, in Charlton's Blue Beetle #4, they ran a contest asking fans to vote on a costume for Dan Garrett. Winners were selected at random and awarded pieces of original art. 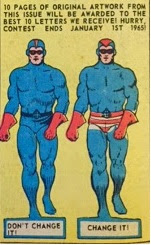 Well after posting the list of winners, published in issue #50, on Facebook, Twitter and Google +, and then reaching out to a few of the names listed, I was finally able to get in touch with one of the winners! 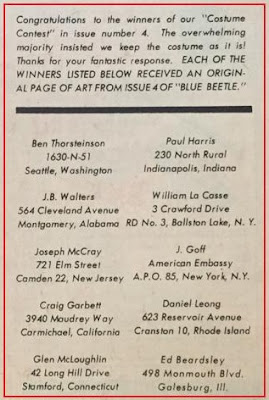 Ben Thorsteinson was gracious enough to message me on Facebook and share what he remembered. According to Ben the art he received, over 50 years ago, was a random page from the earlier issue (#4 which ran the original contest). Sadly though, as he got older and went away to school, his mother threw away the original art along with his other comics.

Ben says he's still a comic fan, and even has a pic of the JSA as his cover photo on Facebook! He's not too happy with how DC Comics has handled the Blue Beetle mythos though. That's something I think a lot of Dan Garrett and Ted Kord fans would agree with. His comic fandom even carries over to the online alternate reality of Second Life, where he plays as a White Lantern. Sounds like fun...I just may have to give it a go myself, as Blue Beetle of course.

Pretty cool, huh? Thanks to Ben for taking the time to share that with us! I'm still on the hunt though. I'd still love to hear from any of the winners about the contest, their thoughts on Blue Beetle, and if anyone still has it...maybe even get a peek at one of those original pages!

So, if you are one of these folks, or if you know any of them, please get in touch!
On Twitter @KordIndustries1On Facebook at KordIndustries

Or email me at kordindustries2013@gmail.com