Previously, Ted's friend and employee Curt Calhoun got doused with molten promethium, Blue Beetle and the Teen Titans took on team of super-villains known as the Hybrid, led by former Doom Patrol member Mento...who then revealed that Calhoun, renamed Prometheus, was the latest member of his team! So what happens next? Len Wein, and the art team of Paris Cullins, Del Barras and Pablo Marcos are back with the final piece to this puzzle, "Blue Beetle" #13, and a story called, "Prometheus Unbound!" 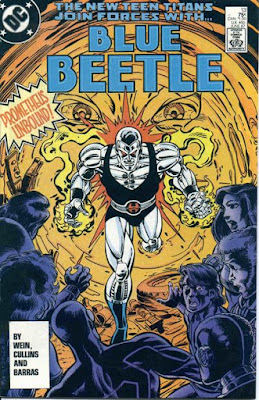 Picking up where we left off last month, Ted's friend and employee Curt Calhoun emerged as "Prometheus" the latest promethium infused member of Mento's team the Hybrid! And wouldn't you know it? Right when it looked like Blue Beetle and the Teen Titans had the villains on the ropes. 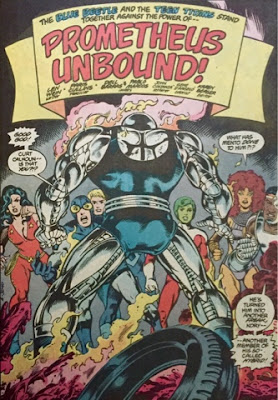 Now where last issue Beetle and the Titans were able to divide and conquer the Hybrid, Prometheus takes them all on single handed! He smashes Cyborg, heats up Donna Troy's lasso, and snatches Changeling (in bird form) out of mid-air...all well practically begging them to leave him be. He's not in control of his actions...Mento is! Speaking of the villainous leader, once Prometheus has the "bird" in hand he disappears, teleported by Mento to the rest of the Hybrid. The heroes try to follow, but as they approach Mento teleports his team, and Changeling, again. 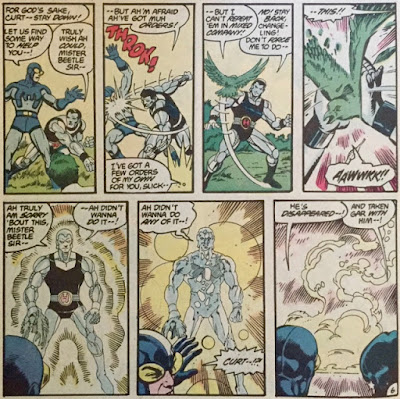 Back in Chicago, Lt. Fisher hires a craggy sea captain by the name of Sledge to take him to Pago Island. While on the island itself, Conrad Carapax continues his exploration of Jarvis Kord's lab.After several days he believes he's figured out hot to control one of the robots with a helmet. He seems to believe this was the secret Dan Garrett came to the island searching for. He's wrong on both counts, and soon finds his body burned and his mind transferred to the robot body.

At Mento's Manhattan headquarters Curt asks for an explanation. Mento explains that he improved him, just like he did with all the other Hybrid members, using the promethium. Not every agrees that it's an improvement, including Curt. "Tough noogies!" is the response, before Mento shifts his focus to his stepson...the captured Changeling. The former Beast Boy tries to reason with his stepfather. His actions aren't his own, it's the helmet that's affecting his mind, but his pleas go unanswered. At that same time, at Titans Tower, our heroes try to figure out how they'll find and rescue their friend. Love him or hate him, Jericho figures it out by checking the phone book, and with that Blue Beetle and the Titans jump into action! As the two teams clash again, Mento begins to question why Changeling would do this? Does the teen want his power? His money? The only one who never wanted something from him was Rita, Elasti-Girl. Then his mood shifts wildly, he blasts his stepson with a mental attack then quickly retreats, teleporting himself and the Hybrid away once again. As Beetle and the Titan's regroup, the teens promise to find Curt and Ted just wonders what he'll tell everyone about their missing friend in the meantime. 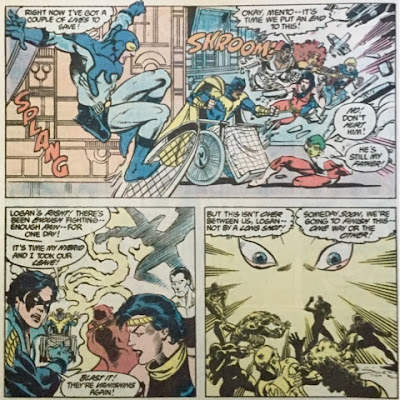 So...that was...anticlimactic? Kind of frustrating, at least for me any way. I wasn't a big fan of this arc, it felt like Blue Beetle was forced to the background in his own book, in favor of the Titans.Then after three issues of build up and battle the villains just disappear? And Curt/Prometheus? He's only seen one more time, in "New Teen Titans" #34 a couple months after this. Loose ends, little closure, and guest stars that overshadow the star...that about sums it up.
Posted by Unknown at 12:00 AM