Back in 1993 DC launched the anthology book "Showcase '93" that ran 12 monthly issues though 1996. The book featured up and coming talent working on 3 stories per issue...and starting with "Showcase '94" #2 contained a 3 part Blue Beetle story! "Caged City, Chapter One: Bug Out" was written by Brian Augustyn, with pencils by Patrick Rolo and inks by Dick Giordano. 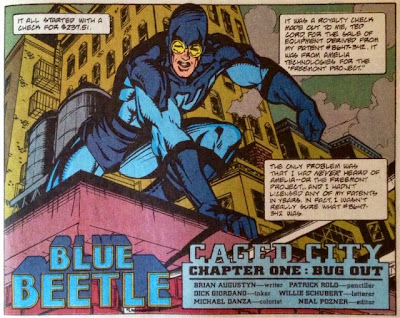 "It all started with a check for $237.51", Ted tells us while perched on a rooftop. He's in Freemont, a small midwest city, and gateway to Hub City. The check was from a company called Amelia Technologies for the use of his patent #B647-342 in "Project Freemont". He can't remember what that patent is...but it's the name of the project that brought him to this city. Ted is just starting to think this is a quiet town when heavily armored cops on motorcycles scream down the street chasing a car. When the driver crashes, the cops began to drag him down the street and Ted decides it's time for the Blue Beetle to jump into action! The cops don't take kindly to the appearance of "a gen-u-ine soo-per hee-ro" and let him know, his help isn't wanted and he has no authority in Freemont. 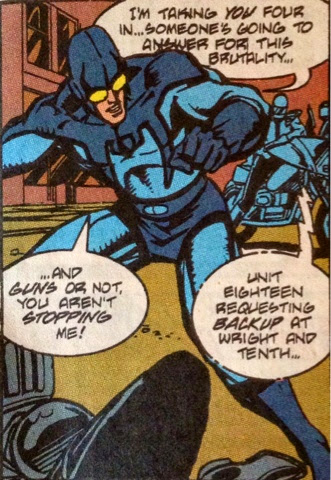 Not one to stand by and allow senseless brutality, BB takes the fight to the cops, but when they call in reinforcements he quickly finds himself on the run! He takes to the rooftops again, thinking he could have avoided this, if he'd just made a few phone calls to figure out what the patent was...and then it hits him...or nearly hits him. The BUG! 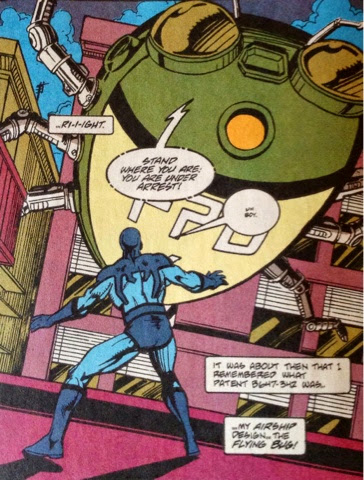 Meanwhile, a mysterious man in a room full of monitors calls for the cops to bust Beetle since "vigilantism is illegal in Freemont". After running into a BUG, Ted decides he'll have an easier time ditching the cops on the ground...and once there he decides it's really safer if he ditches the costume! Heading back to his hotel room (where he checked in under the name "George McCartney"...get it? Beatles joke!) he soon finds out that nowhere is safe in Freemont! 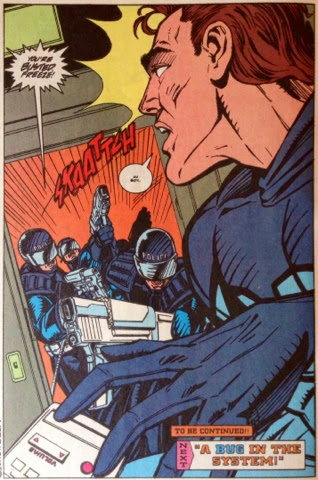 This was a fun, fast paced story! And that cliffhanger ending? Well...check back next month for part 2!
Posted by Unknown at 3:00 AM