Under the creative eyes of Steve Ditko and Gary Friedrich, and editor Dick Giordano, the second Blue Beetle was born as a back up feature in Charlton Comics' "Captain Atom". Today, let's take a look at the second adventure of everyone's favorite Beetle! 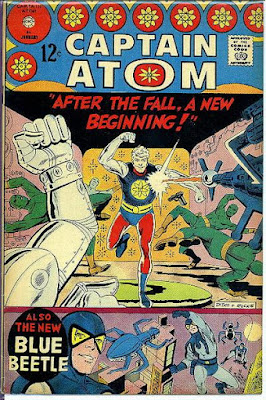 Blue Beetle flies above the sleeping skyscrapers, avoiding a nearby police helicopter, in the BUG. Once he's sure no one can see him, he dives his vehicle into the river where he can access a secret tunnel to his Beetle-lab. 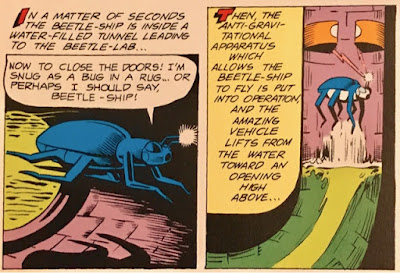 He explains, out loud to no one in particular, that the lab was once his dad's...and if not for his father there would be no Blue Beetle. Combining both of their knowledge allowed him to keep the city safe. Then as we get a quick peek outside to find the lab is housed beneath the Kord Building, as Blue Beetle removes his mask and reveals himself to be...Ted Kord! 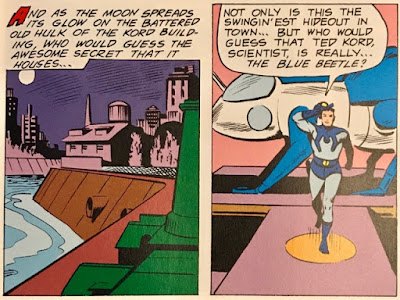 Looking at the security monitors of the Kord Building, Ted wonders why his employee Tracey is there so late. Apparently she's been acting rather suspicious of him ever since he returned from Pago Island. Just then, a security alarm goes off and Ted pulls back on his mask to go investigate! The mysterious intruder quickly finds Tracey and demands she tell him, the Masked Marauder, where her employer keeps their experimental records. She tries to tell him she doesn't know, and he tells her if she isn't able to him...then she's of no use to him!

Blue Beetle leaps into action, connecting with several punches and knocking the Marauder to the ground. But just when he thinks he has the upper hand, the criminal connects with a few punches of his own, and ends his barrage with a stool to the back of our hero's head! 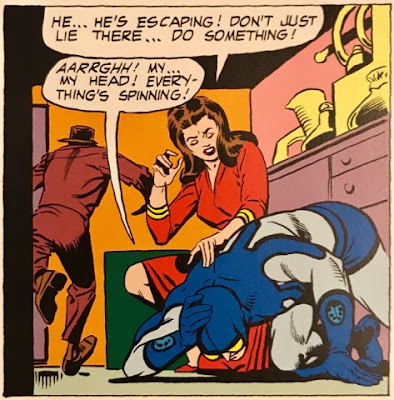 Using this opportunity, the Marauder makes a fast getaway. Blue Beetle comes too, thinking there was something familiar about the burglar, and makes a quick exit of his own leaving Tracey to report the break in to the police. She also has to wonder how she can explain her own presence with out raising Ted's suspicions. A few blocks away the Masked Marauder removes his, uh, mask, and reveals himself to be Count Von Steuben. Not only that, the Count knows this "new" Blue Beetle is an impostor...and he thinks he knows who the hero is!

Back at the Kord Building, Ted asks Tracey why she's there so late...but she's literally saved by the bell as the doorbell rings and the police arrive. Tracey tries to ask if they're there about that the break in but they're not...or at least one of them isn't. Detective Fisher is there to ask Ted some questions about the murder of Dan Garrett! 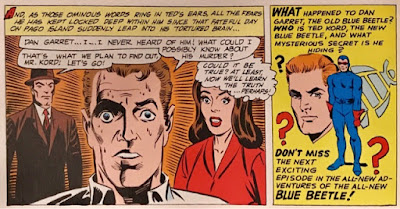 I feel like this one, went by fast! Of course, it's only 7 pages long. The first couple seem overly expository, explaining the underwater river tunnels, and the lab...but after re-reading the first one again (and being a little critical of the exposition) I reminded myself "this is the beginning!" These are the very first Ted Kord stories, of course there is exposition and set up, at the time he was a brand new character! And besides, once the alarm goes off and the Masked Marauder shows up the action (and pace) pick up! It's pretty interesting to me that the Detective Fisher angle starts this soon. I'll be honest, I didn't realize he was a Charlton holdover when he appeared in the Len Wein/Paris Cullins run in the 80's...now I'm curious how similarly or how differently this will play out here.