Ah the 90's...when everything was extreme! Sports were extreme, snack foods were extreme, even our heroes were extreme. Spinning out of the Justice League crossover event "Judgement Day", which saw Booster Gold critically injured and placed inside an exo-suit and Ice killed by the villain Overmaster, Captain Atom pulled together a team of heroes intent on being proactive rather than reactive! Written by Dan Vado, penciled by Marc Campos and inked by Ken Branch, things started in Extreme Justice #0 "With A Bang" 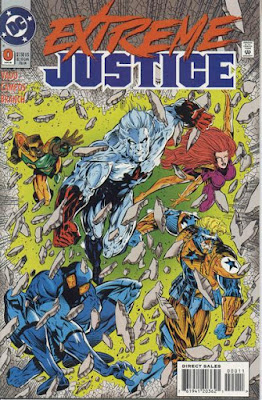 In the Rocky Mountains the military is surrounding one of its own bases. Colonel West has gone rogue and taken over the base, prototype assault ordinance, and missile command. He plans to launch an attack that will push the United States and the Soviet Union into war! Maybe he already has? Radar picks up five unidentified, fast moving objects headed toward the mountain. Captain Atom leads his team (Amazing Man, Blue Beetle, Booster Gold and Maxima) in, and directs them to the command bunker. They have to neutralize West and the command console before he can launch the missiles! Booster, in exo-armor designed by Blue Beetle, flies in blasting at the robotic sentries (that look a lot like ED-209 from Robocop). Captain Atom notes that they're "way beyond" what the military has, implying West has other connections. 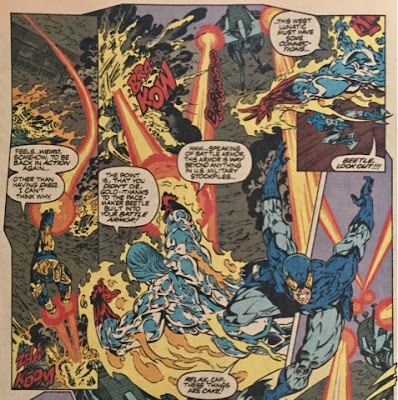 They smash their way through to West's bunker, but it's too late! He's already launched a missile! Captain Atom races into the sky to stop it, or at least steer it off course when suddenly....FATHOOOM! 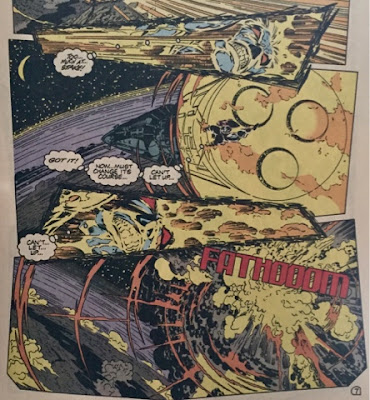 Did the team lose a member already? No, in fact Cap says he's been through worse! The military are glad to have Cap on their team, but he tells them he just doesn't like seeing innocent people hurt, and the only team he's on is the one standing behind him. What team is that? The Justice League, says Blue Beetle. As they leave the scene the other's question Beetle's statement, but he argues they have just as much right to the name as anyone else.

Meanwhile, someone watches the events from afar. Someone hidden in shadows. Someone with an apparent grudge against Captain Atom. Someone, who looks kind of like Monarch.

Cap leads the team to Mount Thunder, an abandoned silver mine in Nevada. 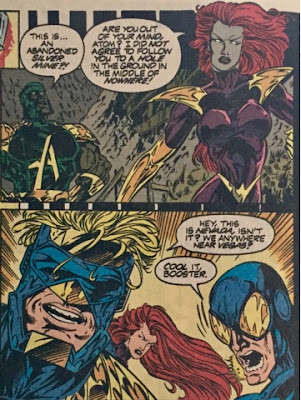 There's more to it than that though. Cap explains that the government owns 90% of the state of Nevada, and that this mine was at one time an off budget bunker the Military Industrialist Community had developed in case of nuclear attack, but it was shut down almost 20 years ago. Or so he thought. No sooner does he finish his explanation than the team is surrounded by more of the ED-209 looking drones and a fight ensues! 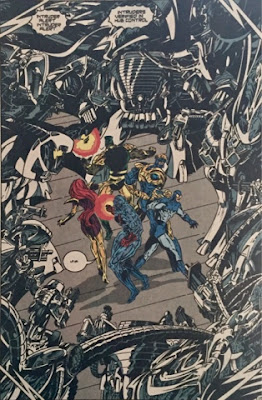 Beetle makes his way to a control room, where the tech seems vaguely familiar to him, and shuts down the security alerts. Once things settle down Captain Atom is none too pleased to find that the place isn't as abandoned as he believes...and he wants answers!

At the White House, General Synge is about to meet with the President until he gets a message from his "wife". He excuses himself, and ducks into a closet to call "home". On a secure line, he connects with a woman named Martha who informs him there's been a breach at Mount Thunder. If that's not bad enough, he really gets upset when he hears who was involved! 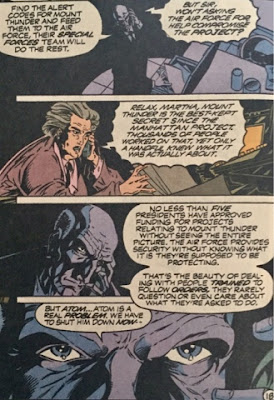 Ronnie Raymond is getting news from his doctor...and it's not looking good. He's told he has an advanced stage of leukemia. The doctor adds that he has virtually no chance of being cured, and that maybe he should visit family or old friends with the time he has. OUCH! 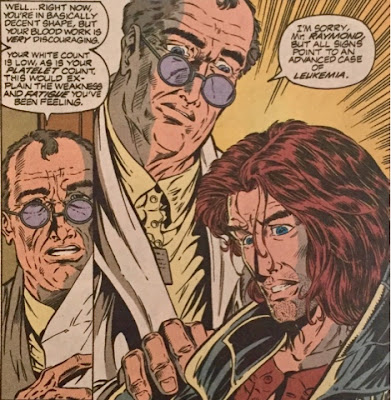 Finally, back at Mount Thunder, the team is debating how best to search the facilities when Beetle manages to start hacking the computer system...just in time to see company arrive at the door. Captain Atom recognizes them as...the Peacekeepers!

Was it good? Yes. Was it extreme? Not so much. Well, maybe the art was. Campos and Branch provide the extreme art you'd expect from a 90's Image comics title! Lots of muscles, reflective surfaces, and tons of line work. It's good, though occasionally a little busy. On the story side, Vado lays some interesting groundwork. A League at odds with the rest of the League, and now on the wrong side of some shady General? Not to mention Monarch. Captain Atom is front and center in this issue. Not only does he lead the team, he leads the story with apparent ties to General Synge, the Peacekeepers and Monarch. Blue Beetle gets lots of face time as well (which obviously I'm a fan of), as comic relief and tech guru. I only wish there was a little more play between Blue and Gold...but then again, if you weren't Cap in this issue you pretty much stuck to the background. There wasn't a lot of room for developing Amazing Man, Booster or Maxima this time. It was fun though...and it's been a LONG time since I read these, so it should be interesting to see what happens next!
Posted by Unknown at 12:00 AM