U"Jaime Reyes: Reluctant Wielder of the Power of the Blue Beetle Scarab. Ted Kord: Billionaire Industrialist and Sidelined Superhero. Together They Are The Blue Beetle...Whether They Like It Or Not." Keith Giffen and Scott Kolins are back with issue #2 and a story called "Blurred" 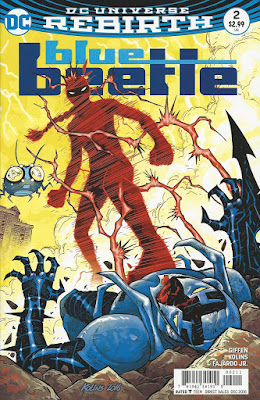 Last issue Ted led Jaime to a house following up on a tip from the metahuman gang, the Posse. Turns out that house belonged to Roger Sheldon, a missing teen...who also happens to be Blot, a member of the Posse.

Issue #2 picks up shortly after, with Blue Beetle, a located Roger, and the rest of the Posse checking out a hole in the Sheldon's house. The same sort of holes have been found at the homes of the other missing teens too. While they try to determine what the connection is Smokey, one of the gang, suggests they take Blot to see Doc Reyes. Surprise! Jaime's mom has been acting as doctor for the local metahumans! Shocked, Jaime nearly says too much...almost gives up his secret identity. 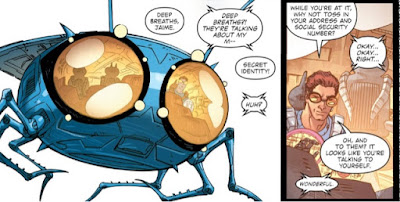 Blue Beetle heads down into the hole to take another look, and to talk to Ted without looking like a crazy person. Ted tries to tell Jaime that what his mother is doing is a good thing! Someone has to watch over the metas, and since Ted's hands are full looking after Jaime he had to delegate some responsibility. Yup, good ol' Ted recruited Jaime's mom! Jaime's about to lose it when Root, the Posse's leader shows up to say they're leaving, but one other member, Blur, is staying behind. Just then Ted notices something...there's no debris...if the holes were dug, how'd they remove the dirt? 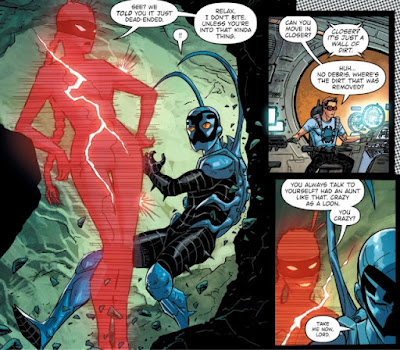 Ted tells Ms. Magnus to give Mrs. Reyes a heads up...just to be safe, while Blue Beetle takes to the sky. It quickly becomes apparent that Jaime is trying to avoid Blur, and even more apparent that he can't! She's a teleporter! She also has a weird passive aggressive crush on Blue Beetle! 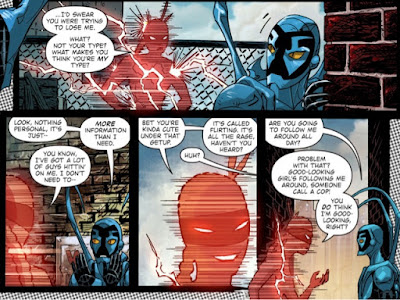 Meanwhile, Brenda and Paco see a guy disappear before their eyes, and have the same thought...better call Jaime! 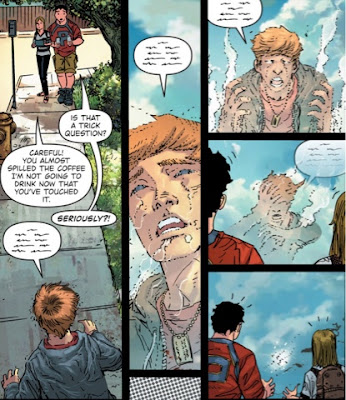 Blur doesn't handle Blue Beetle's rejection well, in fact it just makes her more aggressive! She tries to teach him a lesson by tossing him into a parked truck. 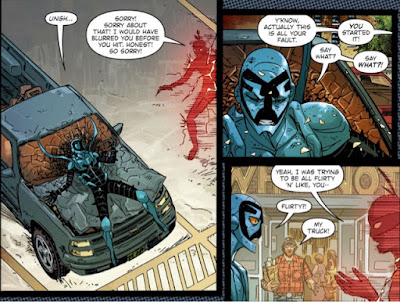 She throws him under a bus too...figuratively, when the owner of the truck shows up. Blur tells the man Blue Beetle will put in a word with Ted Kord who's developing land in the area. Jaime tries to make a quick exit, but Blur teleports onto his back. The scarab produces a weapon and tries to blast her, but she teleports out of the way. Then she grabs Blue Beetle and tries disorienting him by quickly and repeatedly teleporting him around town, finally tossing him into a fence by a ball field. 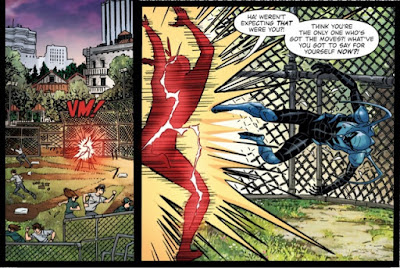 The scarab acts again, tagging Blur with a small...uh, blue beetle, which shuts down her abilities. Jaime grabs her as she falls and she steals a kiss! Unfortunately for her, Root shows up and signals her that it's time to go. 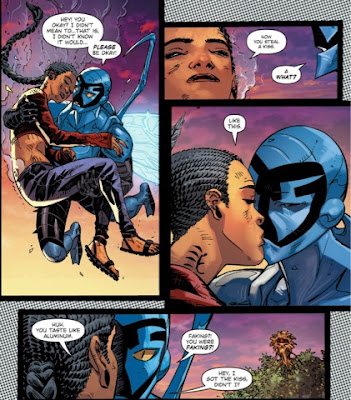 Back at home, an irritated Jaime confronts his mom about what he's learned. She's prepared though, thanks to the call from Ms. Magnus. 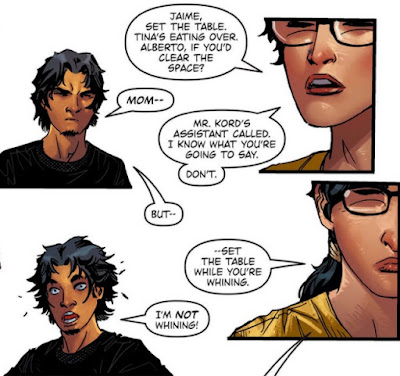 He tries to argue that the Posse are dangerous. She shuts him down, points out that they've been nothing but polite to her, and if anything changes maybe she'll reconsider. And with that...they hug.

First things first...I was originally going to take off again for December, but as luck would have it I had to have hernia surgery and am laid up at home for a few weeks. What better way to spend that time then blogging right? So you'll get this issue, and next week I'll cover issue #3 of the new series too! That ought to bring us up to date on the new stuff! That said, we didn't get a lot of answers this issue, but we did get one new question...what are those holes all about? AND we got a little romance, a little family drama...and a lot of fun! Giffen and Kolins are definitely bringing the fun back to Blue Beetle! Can't wait to see what happens next!
Posted by Unknown at 12:00 AM