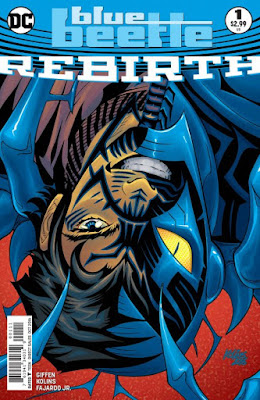 The story opens with action underway! Jaime Reyes is taking on the duo of Rack and Ruin, as the BUG hovers nearby. Jaime tells us, he'd rather be a normal kid, but "I'm the Blue Beetle, or so I've been told." 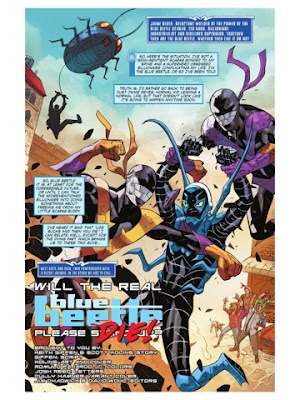 We then flash back to how this day started. Jaime's sister, Milagro, runs out the door to meet a friend before school. Jaime heads out shortly after and bumps into his friends Paco an Brenda before the trio continue to school themselves. So far, everything seems fairly familiar. As they arrive though, Jaime's cell phone rings...it's Ted Kord! 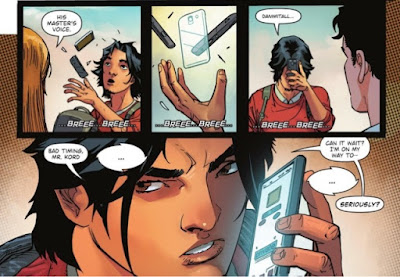 Ted says there's a serious situation, "serious as a heart attack, and I should know." Seems there's some bad guys causing trouble and calling out the Blue Beetle! So Ted starts up the BUG and tells Jaime they'll need to meet on the way. Brenda and Paco offer to cover for Jaime as best they can, as he transforms into Blue Beetle and takes to the sky.

Jaime and Ted rendezvous near the coffee shop where Rack and Ruin are wreaking havoc, holding hostages, and proving they cant spell. 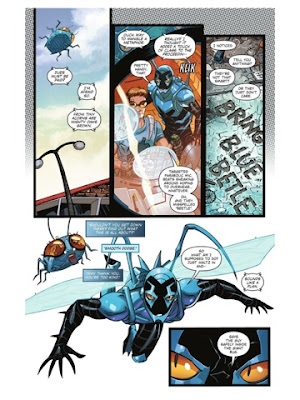 Jaime heads in to try and talk the villains down, while Ted monitors the situation in the BUG. Instead of listening, they take a couple swings at the hostages, before tossing a refrigerator at Jaime. Ted tries convincing Jaime to go on the offensive, but Jaime's trying to hold back...afraid he can't control the armor. He proves himself right when the armor powers up a blaster and takes the roof off the building. As the structure collapses around him, Jaime rushes to save the hostages, creating a beetle wing shield...a move that seems to impress Ted Kord. 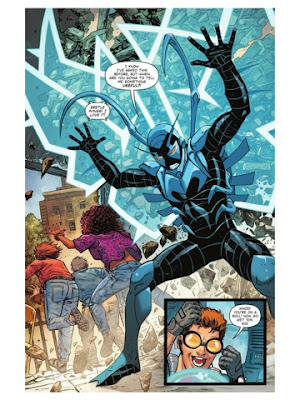 Using the distraction, Rack and Ruin decide to grab each of Jaime's arms and pull him like a wishbone, but Jaime reverses it and smashes the dastardly duo into each other...shattering them! It's a short lived victory though, as parts of the villains rise up to continue the fight! 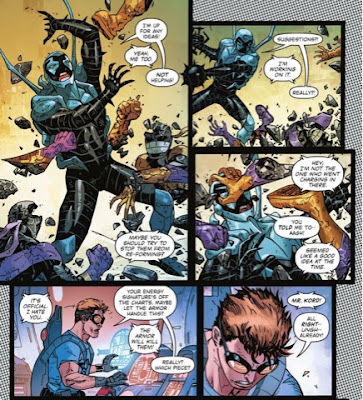 Rack and Ruin pull themselves together and go on the attack...until Ted steps in, launching an attack from the BUG that sends them fleeing. 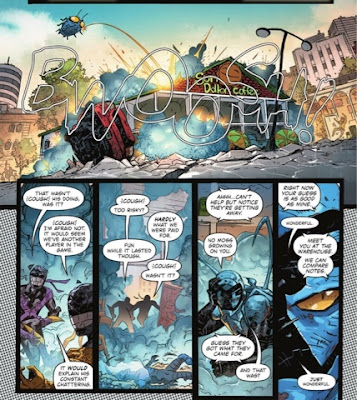 Back at Ted's warehouse, he and Jaime chat...its the same conversation we saw in Rebirth. Ted is eager to help Jaime reach his full potential, Jaime is reluctant and just wants Ted to help him understand and remove the scarab. Doctor Fate shows up to inform Ted that the scarab is NOT alien tech...it's magic! 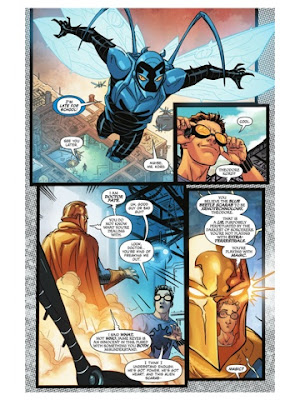 Finally, Brenda arrives home, where her aunt Amparo is on a phone call. We only get her side of the conversation but it certainly sounds like she's discussing Jaime's run in with Rack and Ruin...and she's none to pleased to hear that Jaime is working with someone!

Art wise...it was ok. Some pages look beautiful, some seem busy. It may not be fair to compare, but I enjoyed Gary Frank's art in "DC Universe: Rebirth" so much, it's a little bit of a change to see Kolins here...but it's only issue 1...I'm looking forward to what he does in the future. Jaime's look seems to have some subtle changes, the eyes, the antenna that I assumed were design but now seem to move with his expression or action (go back and look at the beetle wing shield panel). Story wise...when I looked at "DC Universe: Rebirth" back in May, I commented that it was two pages filled with more questions than answers...this is a whole issue that, well, does the same! Jaime's personal life seems to be the norm we saw pre-New 52, but if that's the case, how did he meet Ted, who would have been dead in that timeline? Ted references knowing a lot about heart attacks. Pre-Infinite Crisis Ted Kord had had a heart attack (at least one), but New 52 Ted Kord was a young man, with only one appearance and no backstory involving heart attacks. So which Ted is this, and was he ever a hero? Now that Doctor Fate has revealed the scarab is magic, do we get Dan Garrett back too? And Brenda's aunt...pre-New 52, she was la Dama, and had an arrangement/truce with Jaime/Blue Beetle...but now she's spying on him? Sending villains after him? It's like we're back to square one with that situation...well with a lot of situations. Like I said, so many questions! But know what? I don't care! Blue Beetle is back! Maybe more than one! And at least for now...I'm in!
Posted by Unknown at 12:00 AM