Someone To Watch Over Me

The Last issue, Guy Gardner stopped by the Reyes house for a cook out, before Guy and Blue Beetle flew off to Antarctica to fight the Ultra-Humanite. J. Torres and Freddie Williams II pick things up with this issue, in a story called "Someone To Watch Over Me". 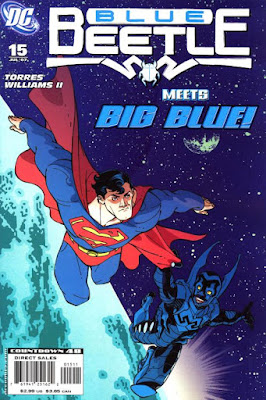 Jaime Reyes wakes up from an awful dream in which he couldn't control the scarab and it rampaged through the streets. 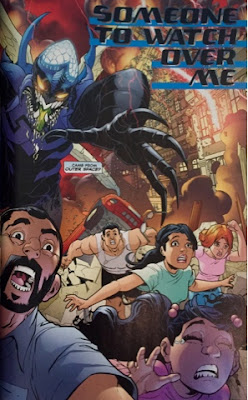 After his mother checks on him, he decides he needs to do something to ease his concerns. He starts by checking in with Hector and Nadia. Jaime needs to understand why he was chosen, why the scarab granted him powers but not Ted Kord. Hector thinks it may have something to do with Ted being a joke. 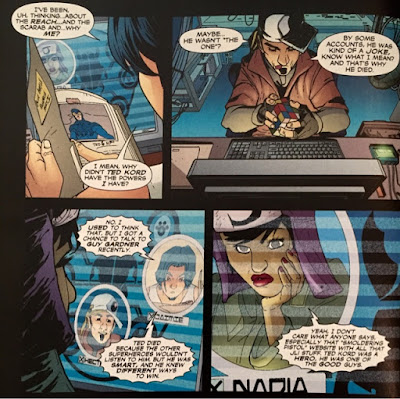 Nadia and Jaime disagree...especially Jaime, after his talk with Guy Gardner last issue. Maybe Ted simply didn't need powers? Maybe it was because Ted was good and there's something "not good" in Jaime. The trio comes to the conclusion his best shot at answers is S.T.A.R. Labs.

On the rooftop of the Austin, Texas S.T.A.R. Labs building, Jaime and the scarab debate whether he should go in armored up or in plain clothes. It doesn't matter, since security has already detected him. When the guards approach, the armor goes up! To make matters worse, Livewire is at the lab for tests and decides she should "help". 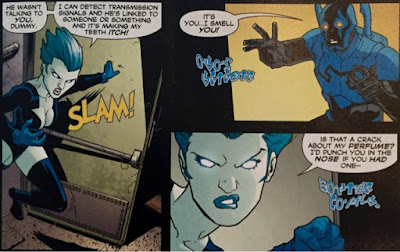 It's funny, because as they tussle Jaime mentions smelling her, a scent like lightning. She on the other hand "hears" him, or the scarab...an annoying sound ringing in her ears. They trade quips, as heroes in battle often do, until something unexpected happens. Livewire begins leaching Blue Beetle's power! It looks bad, as the armor is slowly stripped away, along with his power until on the scarab's recommendation Blue Beetle siphons some of it back. Livewire's not down yet, though, and the two charge at each other in a climactic BOOOM on the rooftop!

And then...Superman appears! He quickly defuses the situation, snatching Livewire and Blue Beetle from their fight and playing mediator with reps from S.T.A.R. Labs. 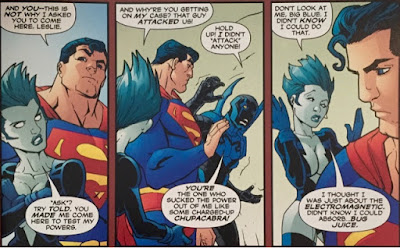 We learn that Livewire has never exhibited that leaching ability before, and that even Superman can't hear the sound coming from Blue Beetle that's been nagging at her all issue. Jaime explains he came to the Lab for help, but before they can step in Superman does. He puts Jaime at ease and listens. 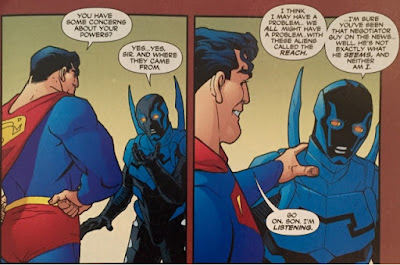 When Jaime is done, Superman smiles and assures him it's not where the powers come from, but what he chooses to do with them! And then, like a playful big brother helping comfort a younger sibling, challenges him to a race! 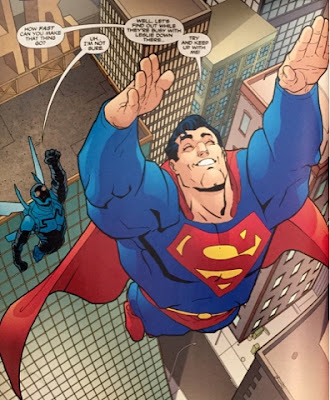 This was a nice issue! I like the last couple issues, showing Jaime trying to find his place in the DCU, trying to understand the legacy of the Blue Beetle. This has really gone a long way into helping me enjoy this version of the character...and that last shot of Superman and Blue Beetle flying and smiling? You don't see nearly enough of that in comics!