Len Wein, Paris Cullins and Bruce Patterson return to bring us Blue Beetle #3 from 1986...and this time they have company! The cover promises "Blue Beetle Mixes It Up With The Malevolent Madmen!" 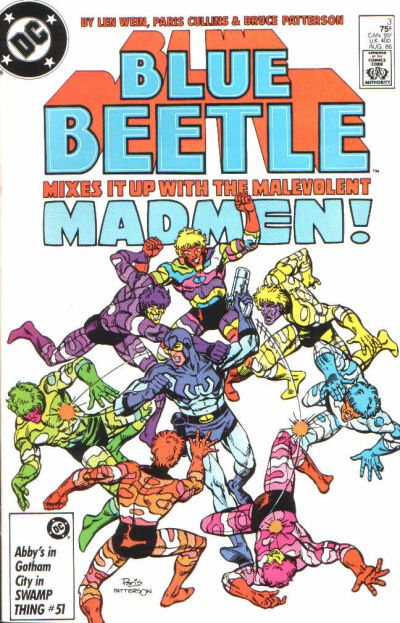 (Spoiler alert! They don't show up till about 2/3 of the way through the issue)

Things pick up right after the events of issue #2, with Ted soaring above the city in the Bug heading back to his hidden base at Kord Inc. Thinking to himself, he notes that...duh-duh-dum, the fire department found no trace of Firefist in the ruins of the burned down fire museum. As he nears home he spots one of his employees, Jeremiah, being hassled by some thugs. Thugs led by Farley Fleeter. Apparently Jeremiah is being coerced into doing something and Fleeter wants to speed up the time table. Ted's a good guy though and doesn't appreciate seeing his employee harassed...so he swings into action as the Blue Beetle!

Next we check in on Ted's secretary Angela as she gets ready to leave for work. She checks on her uncle as he tinkers with some gadgets and he tells her to bring him back some more circuit switchers from Kord Electronics. When she tries to protest, he grabs her and lets her know she doesn't have a choice...in fact she owes him, "...this whole damn world owes me...and soon the world will pay!" Duh-duh-dum!

Once at the lab Ted checks in on the metallurgy lab, where Curt "there isn't a better metal man in the business" Calhoun is running some tests on the promethium that Takamoto brought over from Star Labs.

Meanwhile, Fleeter takes a meeting at a dingy dive bar, "the sort of joint even the cockroaches won't patronize unless they're especially desperate". The guy who sent the meeting request? The same freaky janitor that's been skulking around for the last 2 issues! He wants Fleeter to get his old gang, the "Madmen", together to pull off a job at Kord Inc.

Lt. Max Fisher, Chicago PD, shows up at Kord Inc., and spooks Angela. He's not looking for her though, he wants to talk to Ted about the death of Dan Garrett. His arrival though coincides perfectly with a delivery of several crates that just happen to contain the magnificently multicolored Madmen! Cue chaos and chase music! A worker on the loading dock sets off the fire alarm, and Kord and Fisher see what's going on through Ted's security monitors. Fisher leaps into action, while unbeknownst to anyone else Ted does too...slipping into costume as the Blue Beetle! Jeremiah does his part by activating an emergency security system that looks like something developed by Oliver Queen, launching electrically charged arrows at the Madmen. Jeremiah recognizes one of them as Fleeter, but Farley's not here about him this time...the Madmen are after something in the Experimental Weapons Lab! Ted and the Madmen twist and tumble in a turbulent tussle. (how's that for alliteration?) And just as BB manages to take out the last Madman standing, a mysterious figure slips into the metallurgy lab. Curt tries to stop him, but fails and the figure grabs the prometium in a flash of Kirby krackle. Ted get's to the lab just in time to ask "Who are you? What do you want here?" The answer? " My name is Doctor Alchemy!...and as of this moment, I am the rightful Ruler Of The World!" Duh-duh-dum!

This issue had some fast pacing and some frenetic, kinetic fight sequences expertly handled by Paris Cullins! Throw in 2 villain introductions and another cliffhanger ending and I'd say it's a winner!

See you next week!