The Answer Is Alchemy!

Set your Way Back Machine, TARDIS or other method of time travel to June of 1986* when the team of Len Wein, Paris Cullins and Bruce Patterson brought us Blue Beetle #4! "The Beetle Battles An Ancient Evil...The Elemental Madness Of Doctor Alchemy!" 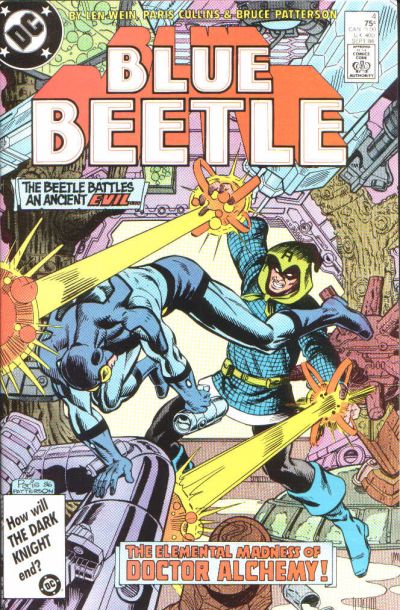 When we last left our hero, Kord Inc's headquarters was under attack by the Madmen and Docor Alchemy had just burst onto the scene! As the two begin to tussle though, we learn BB has never heard of the bad Doctor. "Apparently, my name hasn't spread much beyond Central City..." the villain replies. We also learn that Doctor Alchemy came to Kord Inc to merge his Philosopher's Stone with the prometeum, and, after dropping it during their fight, that the stone won't work for him unless he's holding it. After a few more punches Alchemy manages to escape through a window after turning a lab table into a helium filled getaway vehicle!

Elsewhere, Angela (the theiving receptionist) surveys the damage and helps untie Jeremiah and Melody while Officer Fisher rounds up the remaining Madmen. In the meantime Ted gets out of costume and back into his civilian clothes, and just in time too! Fisher barges back into Ted's office to throw more accusations about our hero's involvement in Dan's death and promises he'll get the answers he's looking for one way or another!

Back on Pago Island, a humming noise from deep within the rocks gets the attention of Conrad Carapax...but that's all we get of this particular sub-plot for now.

In Chicago, Alchemy takes of his hood and hangs out in his seedy hotel room pondering the power he has at his fingertips. The only problem? He realizes now that he has to hold the stone for it to work. So...what's a villain to do? "I simply must become the stone!" And, so, he wills the stones power into himself, but quickly finds it's more than he's prepared for...more power than he can control!

Ted takes a few moments to chat with Melody about love and marriage, and with Jeremiah about getting beat on by thugs, before popping by the lab. Takamoto is up in arms about the prometheum being stolen, until Calhoun assures them he only got away with a small piece. That's when they get word that an out of control Doctor Alchemy has just attacked STAR Labs. Ted slips out of sight and into some blue tights before hopping in the BUG to save the day.

The incident at STAR Labs is being covered by the media...but not just anyone, it's Vic Sage. Alchemy is running wild, turning various members of STAR Labs security into elemental statues, but Ted starts to figure out that the power of the prometheum is killing him...until in one big "POUF!"  Alchemy really does get what he wanted and literally becomes the stone. Outside Sage questions** Takamoto about what happened. We don't know if Alchemy is alive or dead, but STAR is ready to work on curing him. Blue Beetle gets credit for defeating the villain and compared to the Lone Ranger. But when Sage asks if Takamoto can help him get an interview with the scarab superhero he finds that BB doesn't tend to stick around long enough to chitchat...

This was another solid issue! The pacing is quick and fun (even if somethings are handled too quickly, like the Pago island drive-by) and the art is great! I've always thought Kevin Maguire did some of the best facial expressions in comics...re-reading these early issues of Blue Beetle I'm recognizing just how good Paris Cullins is too! Shock, surprise, malice...he can do it all!

* The issue is cover dated September 1986, but Mike's Amazing World Of Comics lets us know it actually hit the shelves June 12, 1986!